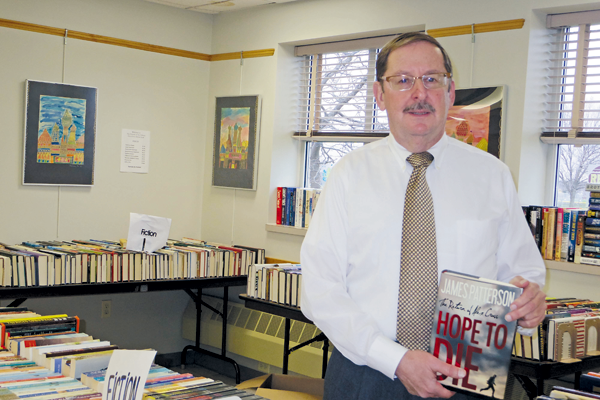 On to the next chapter: Grand Island library director to retire after 32 years

The Grand Island Memorial Library is a gathering place for people ranging in age from 6 months to 100 years. They come for story hour, computer training, book club meetings, a community gathering, or to borrow books and videos and more.

There is plenty of space for all of these events at the building on Bedell Road.

On Feb. 14, 1984, however, when Lynn Alan Konovitz started as the director of the Grand Island Memorial Library, the situation was completely different. The entire library was housed in a room in Town Hall. There was little space for community events. "During story hour, we took over the courtroom. Every now and then, shackled prisoners were brought in. Mothers checked out what was going on, to see if their preschoolers were still safe. There were two burly sheriff's deputies with guns monitoring the prisoners with 3- and 4-year-old children in the courtroom."

"We needed room for a new library, and the town needed us to be out of Town Hall," said Konovitz, who has worked in the library system since 1977. In February 1988, Grand Island voters approved a proposition calling for the allocation of $1,755,000 in capital funds to construct a library and a recreation building on property donated to the town by the Funk family. Grand Island's first freestanding library was opened on Oct. 23, 1989, and was dedicated on Nov. 29 of that year.

After 32 years as director of the Grand Island Memorial Library, Konovitz will retire from the library system. His retirement will go into effect on Dec. 26.

During Konovitz's tenure as library director, the library has seen many changes. "Technology is one of the biggest changes since I came here," Konovitz said. "We didn't know what a computer was at the time." In 1989, Konovitz received a capital grant to purchase equipment and to enhance the library's material collection, which consisted of books, VHS videos, music cassettes, and books on cassette.

Konovitz said that the meeting room is available for sports sign-ups, flu shots, homeowners associations, and other groups. Also, from September through December of 2014, "we were the library for Kaegebein Elementary School" as its library was being renovated. "Every child got a library card."

There are also Grand Island Historical Society displays at the library. It was Friends of the Grand Island Memorial Library President Mary Cooke's idea to post those displays, Konovitz said.

Support for the library comes from a variety of organizations. The Cinderella Isle Garden Club maintains the gardens outside of the library. The Grand Island Lions Club pays for large print and sight-saving books. The Grand Island school system provides the artwork that decorates the library's meeting room. The Friends of the Grand Island Memorial Library pays for extras that are not covered by the town. These extras include wireless Internet service and the picture frames for the students' artwork. The friends group supports the extras by holding two book sales a year, in addition to a continuous book sale.

Cooke said, "The walls would be bare without the stunning artwork. Kids come in with their family and are photographed in front of their pictures. We are very blessed. The community has benefited from having Lynn as the director for 32 years."

She notes he library has received three grants to digitize the entire collection of the Island Dispatch. "It should be done by the end of the year. You'll be able to access the Dispatch on Grand Island or anywhere in the world. I'm leaving. I want this done."

Konovitz said that students from the art classes of Nora Klein and Drew Dulak at Veronica Connor Middle School are making a mural to decorate the young adult area of the library.

The children's area has been "made homier" with shades, benches, fabric, and a large rug with a picture of the "Very Hungry Caterpillar," a story written and illustrated by Eric Carle, Konovitz said.

As for the adult section of the library, the 30-year-old furniture will be replaced by comfortable seating.

Library staff members said they enjoy working at the Grand Island Memorial Library. Senior clerk Julie Bordonaro said, "Mr. Konovitz pays attention to detail, and that's why this library is such a nice library and is a good place to work. I always tell new pages that this is a tightly run ship."

Library caretaker Harold Duck has been part of the staff since 1989. He said, "It's a great place to work. Mr. Konovitz is a great person to work for; he cares about the employees and the building and the library. The work is different from day to day, and I don't know what I'll be doing until I get in there."

The library has two full-time librarians on staff: Konovitz and Anne Slater, who serves as the children's librarian. Slater described Konovitz as "always fair to his workers and always looking to do his best for the Grand Island community."

Sal Bordonaro, a retired librarian, has worked part time at the library since 1996. He said that he was working in the Williamsville branch when he first met Konovitz in 1978. He said, "The Grand Island library has been a well-run and well-managed library because of Lynn's experiences as a supervisor."

Bordonaro said that Konovitz's "departure is a great loss for the community and the library system because of the many years' experience that he's obtained in the system. Lynn has always been a community minded system, involved in Island organizations, such as the Rotary Club, Lions Club, etc. There is a face behind the library and that face has been Lynn's since 1984. If it weren't for his involvement in working with the town, Grand Island would not have a free-standing library."

Duck described Konovitz as a "good boss, friend, and co-worker. He's a good, honest guy. I will miss him. I hope that he has a good retirement and gets to do the things that he's always wanted to do."

Konovitz has been honored for his accomplishments. The Rotary Club gave him an award in 2011. He has also been honored by the library board of trustees. In 2013, the Grand Island Chamber of Commerce gave him the title of Citizen of the Year.

A reception will be held from 5 to 7 p.m., Dec. 7, at the library to honor Konovitz. The public is invited. Refreshments, including a cake, will be served.