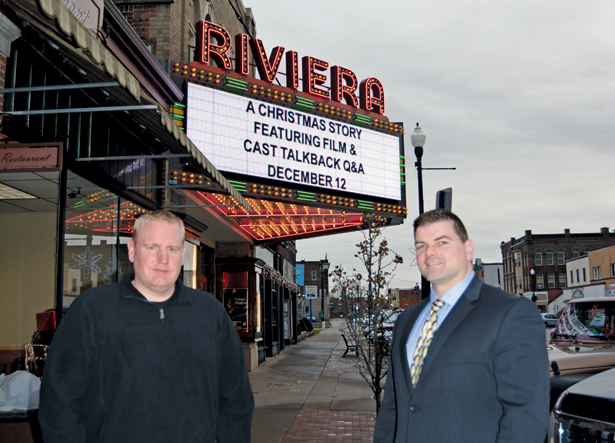 Joe Lavey Jr., left, co-owner and promoter of Carousel Promotions LLC, stands with director of development for the Riviera Theatre Gary Rouleau, in front of the theater's marquee displaying "A Christmas Story."

'You'll shoot your eye out': Stars of 'A Christmas Story' film to visit Riviera for families, fans

North Tonawanda's Riviera Theatre and Performing Arts Center is getting ready to welcome stars on Saturday, Dec. 12, from "A Christmas Story," a 1983 film that still airs each holiday season across the nation.

The event, sponsored by Sweeney Hose Co. No. 7 and put on by Carousel Promotions LLC, will involve some traditional and new elements. The day's activities will kick off at noon in front of the Riviera Theatre, where attendees will have a chance to ride on the original fire truck from the film, as in years past.

The event will also consist of a new two-hour "Talk Back" session beginning at 1 p.m., where five of the actors from the film will answer questions from author Caseen Gaines, who wrote "A Christmas Story: Behind The Scenes of a Holiday Classic."

"The guys (actors) will be on stage. He (Gaines) will be talking with the guys just like a talk show host would, and they're going to talk about everything from what it was like to film the movie, to some of the stuff they got into on the tours - a bunch of stories. By the end of the movie, you're going to learn about stuff from the film that's never been talked about before," said Joe Lavey Jr., co-owner and promoter of Carousel Promotions LLC.

Gaines won't be the only one to ask questions.

"We are going to do live tweets from the seats," Lavey said. Audience members will be able to tweet questions that will show up on Gaines's tablet, while on stage with the actors. He can then ask the actors those specific questions in addition to his own. "Hopefully those questions will spin it off into different stories. So it's very interactive."

Lavey even said stories about "pranks behind the scenes" would likely be brought up.

"There's one where they pranked the director, Bob Clark. They ordered a ton of food to his room at, like, midnight as a joke. So they're going to talk about all different sorts of stuff like that," Lavey said.

After the "Talk Back" session and a brief intermission, the screening of the film will take place on the Riviera's big screen.

Following the screening, attendees will have the option to stick around to meet the cast, as well as purchase autographs and merchandise from them.

A Red Ryder BB gun, similar to the one featured in the film, will be raffled at the event. Only those attending the event will be able to participate.

The money raised will go to Sweeney Hose Co. No. 7. The winner of the gun will have it signed, in person, by all the attending actors.

"Tying in meeting the actors of a Christmas story to a child or even to a young adult is awesome because it's probably been in their life - in their living room - their entire life," Anaya said.

"We want to make our patrons happy when they come and visit the theater," said Gary Rouleau, director of development at the Riviera Theatre. "We want them to have the full experience and the access to the actors, so we're more than happy to leave the doors open until everybody gets their meet and greet with them."

"They (the actors) are so outgoing with the fans, and they love the fans," Lavey added.

"It's about the fans," Anaya said. "It's about making that connection between actor and movie: And they get to know us a little bit and they have that experience for the rest of their life."

"(The event) is just to get out and bring the kids to a historic theater with their family - get some information on the movie from the actors' perspectives and just a great day," Rouleau said.

Tickets for the event are currently on sale for $24, while supplies last. Seats are assigned and tickets are not general admission.

Behind the scenes: How 'A Christmas Story' came to NT 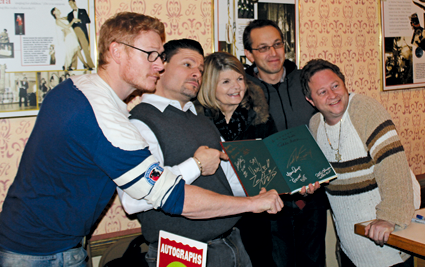 Actors from "A Christmas Story" posed for a photo at the Riviera in 2013. From left: Zack Ward, Yano Anaya, Patty Johnson-Lafontaine (who played the Higbee's female elf), Ian Petrella and Scott Schwartz. Johnson-Lafontaine will not be attending this year's event.

With so much positive feedback and support from the community and entertainers, one may wonder how this tradition, unique to North Tonawanda, began.

"This thing started back in 2012 when actor Ian Petrella, who played Randy in the film, was looking for small town theaters that would be willing to put the movie back up on the big screen," said Joe Lavey, co-owner and promoter of Carousel Promotions LLC.

"I just went on Facebook (and I have a Randy Parker page), and I went on online and just put up a post - 'Who wants to have "A Christmas Story" played in their town?' and just got a lot of emails and Joe ... said 'I have a great place you can do it at' and I'm like, 'Good. - Let's talk,' " Petrella said.

The "great place," Lavey was referring to was Webster Street's Riviera Theatre and Performing Arts Center.

After discussing the theater and event plans, Lavey worked to organize an event where the public was able to meet Petrella and ask some questions, as well as watch the film.

"We played the movie on the big screen again," Lavey said.

Lavey said Petrella was "so impressed with the theater and the area that the following year, 2013, was the 30th anniversary since the film was made. He (Petrella) asked if I'd be interested in doing another show with him and bringing additional actors. So we did a 30th anniversary show and we had a large Q&A panel with six of the actors from the film."

This event filled approximately 900 seats at the Riviera.

"It actually worked for a fundraiser. We used it as a fundraiser for both the Riviera Theatre and the Sweeney Hose Fire Co.," Lavey said. "The fire company made a good amount of money to help continue funding its scholarship fund."

After the success of the anniversary show, no future shows were planned.

Lavey received feedback on this decision and was surprised by strong reactions from local fans.

"We received a lot of emails and questions from people asking me why we weren't doing it. They went to the theater and there was no show listed," he said. "So I was like, 'Oh, boy.' I didn't know it grew so big. I didn't know it had such a big following. "

That's when Sweeney Hose Co. No. 7 stepped in and told Lavey it wanted to sponsor the "A Christmas Story" event again and bring it back to North Tonawanda.

"Us as a cast ... we're going to get older and we're not as cute as we used to be. So, if they want us to come out, we got to do something and have some sort of entertainment value, as well," Petrella said (laughing).

And so, with brainstorming and modifications, "A Christmas Story" is going to be told again.

"It's kind of becoming a tradition in North Tonawanda to have the movie there and then people come see it. ... That's really what we're trying to do," Petrella said.

"It's a Christmas classic movie. It really does raise the Christmas spirit in the community," Anaya said.

"We like the fact that the movie is continuing on," Petrella said. He was 8 years old when acting in the film. "Nobody really thinks, 'We're going to do a movie and then, 30 years from now, we're going to be doing signings and appearances.' It's really all kind of a nice surprise to see that this is happening with a movie that's 30 years old. A lot of times people just think, 'Ah, it's a 30-year-old movie, who cares? It's over. It's done.' But for some reason or another, this movie - I can't put my finger on it - this movie just won't go away. The people won't let it go away."

Joe Lavey Jr., left, co-owner and promoter of Carousel Promotions LLC, stands with director of development for the Riviera Theatre Gary Rouleau, in front of the theater's marquee displaying "A Christmas Story."