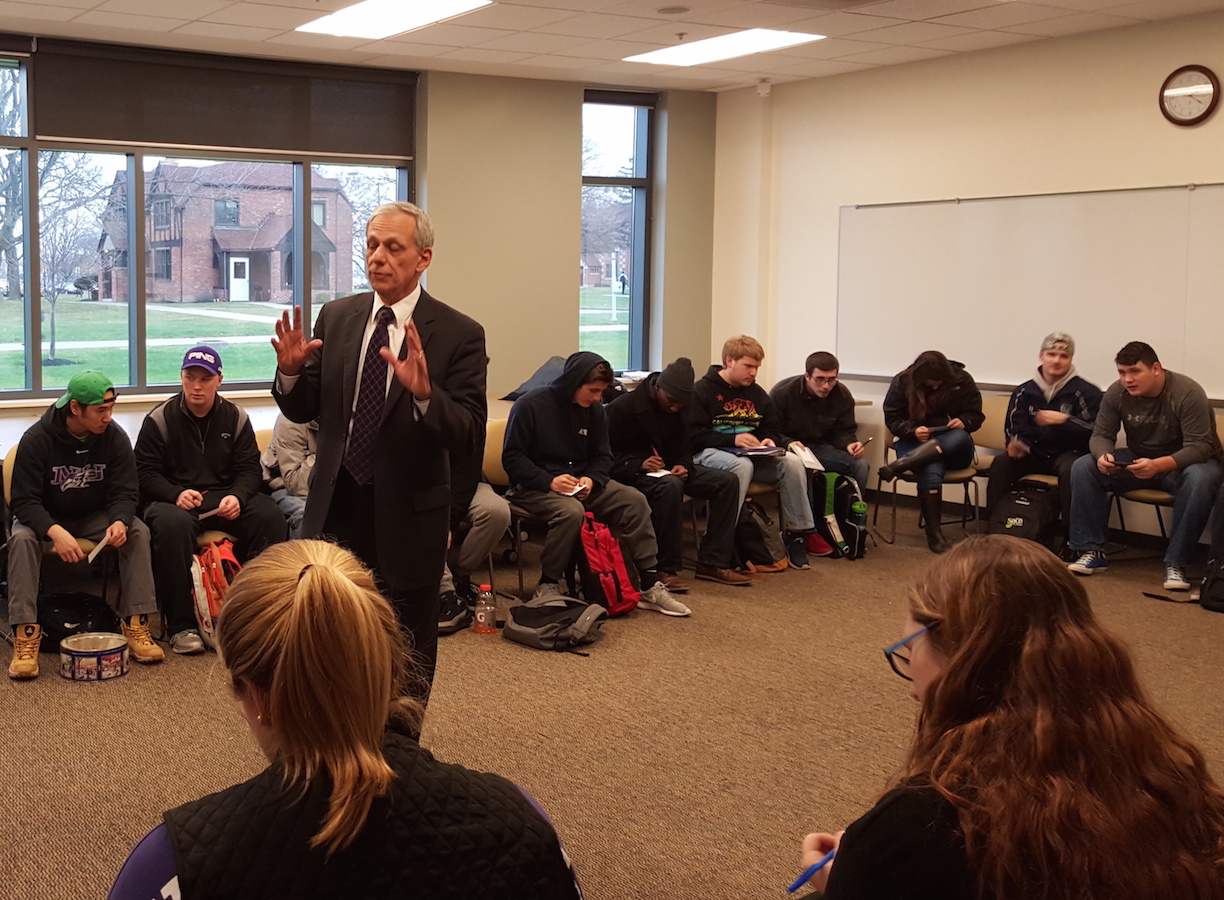 Mitchell Alegre teaches within the circle.

Niagara University students were seated in rows as they awaited the start of their weekly class. The set-up was perfect for a lecture, but this course was anything but. The clock signaled the start of class and the students went into motion - seats started to move, desks were pushed to the back of the room, and a circle was formed. Everyone raced to the seats quickly. A voice called out, "Time!" and a student responded, "One minute."

This was more than furniture rearrangement; this was complete dismantlement of the lecture hall. Mitchell Alegre, professor of management at Niagara University, was the force behind the move. He has developed a whole new way to teach a college course, and it involves a circle. He refers to it as a learning community - a place where students get to know each other and take an active role in their learning.

In the learning community, students do not sit in submission to their professor; rather, they take control. Alegre is determined to have his students know about management and how to manage. Students worked, and continue to work, together as an organization to do simple tasks of moving furniture, and more complex tasks of working for a client.

In one section of the course, students work for the Francis Center - a Niagara Falls-based not-for-profit that helps underprivileged children in second and third grade get proper education. In another, students' work for NU Goes Green, a campus club devoted to bettering the environment.

Students signed up for management, and that is what they got.

This is Alegre's plan: Bring the real world into the classroom.

He designed this course to counteract a complaint he hears too often from employers. That complaint, as Alegre phrased it, is "grads don't know how to do anything."

"Let's say that you took a course on tennis," Alegre said. "You attended classes where you listened to lectures on tennis, viewed PowerPoint slides and videos, heard guest speakers talk about their experiences of playing tennis; you read a tennis textbook, wrote papers on tennis, took exams. As a good student, you earned a top grade for the course. You then go to the tennis coach on campus, show your course transcript with your excellent grade and say you want to be on the tennis team.

"Think you will get on the team? I don't think so. The coach wants someone who can play tennis."

Alegre said, "Each spring, college graduates go into the job market and display their college transcripts to prospective employers and say, 'Look at my high GPA. Hire me!' Those grads may know something about management - though it is doubtful they retained much content from their courses - but are ignorant of the realities of working with people within a management context."

He explained it was student-led presentations that persuaded him to break away from the traditional lecture format.

"Two students made an impassioned argument about what is wrong with the education system. They persuaded me," Alegre said.

His course is a communal effort to success. Students are meant to "care about each other, and support the learning of all the community members," Alegre said. A student cannot succeed fully without his or her counterparts - just as a business cannot succeed without proper management.

Kyra Rieker, a Niagara University junior marketing major, said, "Professor Alegre's style is something fresh to me and something I learn better from than typical lecture style. He helped me find my strengths in my personality and leadership skills."

"Professor Alegre's teaching style is very laid back!" she said.

Godwin said she enjoys going to Alegre's class "due to the way he teaches his classes," and "would highly recommend other professors, if possible, to do something similar."

Godwin and Rieker were in agreement the content is not hindered, but rather explained in greater detail. They said they've learned about management and how to manage in equal measure.

Alegre has taken a risk in completely changing the way he teaches. Students are thrown into a drastically different environment. Such a change could send students running for the hills - and for some, it does. But, for the majority, they welcome the change with open arms.

"To learn, we must venture outside of what we know into what we do not know," Alegre said. "Learning is facilitated by an environment where people can take risks, fail, and not be ridiculed."