Above and Beyond: Beloved Island doctor saved by GIFC

Dr. Edward A. Rayhill discovered the truth of the old saying "what goes around comes around" when paramedics from the Grand Island Fire Co. arrived at his door on Oct. 6.

The veteran physician, 86, knew he was having a heart attack, and like other Island residents who need emergency services, knew who to call.

Rayhill is known simply as "Ted" by his friends and family, and that includes the Grand Island Fire Co. There even the youngest members know that the paramedic program grew into what it is today thanks to Rayhill's assistance.

Through Nov. 1, the fire company has responded to 1,392 calls, of which 998 were EMS and 373 were fire calls. A few others were what are termed "officer calls" where an individual officer checks on a situation to see if help is needed.

"I think Grand Island is very fortunate to have such an experienced and dedicated group right here on the island," said Rayhill, a family physician here for more than 40 years before retiring. "They've saved more lives than I have." 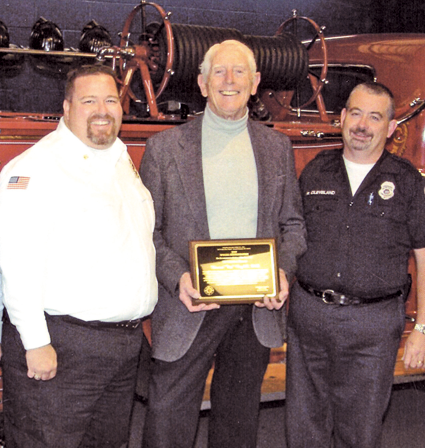 The volunteer fire company was formed in 1938 by residents concerned about the Island's relative isolation in terms of receiving quick assistance in case of a fire.

Back in the early 1970s, there was a particularly nasty car accident on the Island. Rayhill was called to help those injured and found fire department members at the scene not knowing what to do because they weren't trained in first aid.

"Ted took it upon himself to get the ball rolling," said current Fire Chief Matt Osinski, who recently spoke about the company's past history with Norm Mrkall Sr., who was chief when Rayhill decided to help upgrade the fire company's training.

Mrkall told Osinski that he still remembers Rayhill sitting on an upended milk crate at the hall, holding a stethoscope and a blood pressure cuff, and telling the members that they didn't need to be doctors to use them. Rayhill helped members Lance Kohn and Gail Lazenby form the original first aid unit.

Rayhill put his medical license on the line to prod the state to approve the Island's paramedic service, said Osinski, who also is a Buffalo career firefighter. Osinski said it is believed that Grand Island was the first volunteer agency to offer paramedic-level service in this area and was among the first in the state.

Those early paramedics were pushing the envelope to provide the service. "They were not going to take no for an answer even though they were told by a lot of people that it was never going to work," Osinski said.

Nowadays, the unit has 16 state-certified paramedics, 44 basic emergency medical technicians, four active doctors, five doctors who are life members, including Rayhill, and three fully equipped advanced life support vehicles. Some other fire departments started paramedic units about the same time Grand Island did, but many of them have since dropped their care to the basic level due to the time and cost involved for training and equipment.

"It's been an incredible commitment from our members," Osinski said. "Obviously, it's paid dividends, not only to Ted, but to a lot of people the fire company has helped over the years."

When the call came in about 1 p.m. Oct. 6 that Rayhill was having chest pains and trouble breathing, Deputy Chief Chris Soluri was on location within about two minutes, driving his paramedic-equipped vehicle. He initiated care and was joined quickly by day captain and past fire chief Kevin Koch with member Skip Mrkall, followed by Ray Pauley driving another rescue vehicle. A 12-lead cardiac monitor was attached to Rayhill (it provides a much better picture of the heart for doctors than a normal four-lead monitor) and nitroglycerin was administered.

Twin City Ambulance also was dispatched and arrived at the scene within 10 minutes.

"Dealing with one of our own, as Dr. Rayhill is, was a pretty stressful situation for our guys," Osinski said.

Rayhill ended up at Buffalo General where a neurologist removed a large blood clot from an artery.

Rayhill and his wife of 62 years, Joanne, can't say enough in praise of the response from what they call "our boys" on the Island on which they've lived 57 years.

Joanne, for whom they also came to the rescue when she had a heart attack in 2002, said members of the fire company stayed with her while her husband was in surgery.

The two met when she was only 15 and he crashed her brother's wedding. Her father was a physician and played a part in Rayhill's "kind of a craving" to work with and care for other people after serving two years in the Navy. The Rayhills were married after she graduated from college while he was in medical school.

Today, they're back to trading teasing quips (He: "You're more beautiful than you were then." She: "He has a lot of malarkey."), completing each other's sentences, plus bragging about and enjoying their four children, eight grandchildren and four great-grandchildren.

And, he's still tops with the Grand Island Fire Co. Osinski is planning to bring Rayhill to the firehall for the advanced cardiac life support class on Nov. 28.