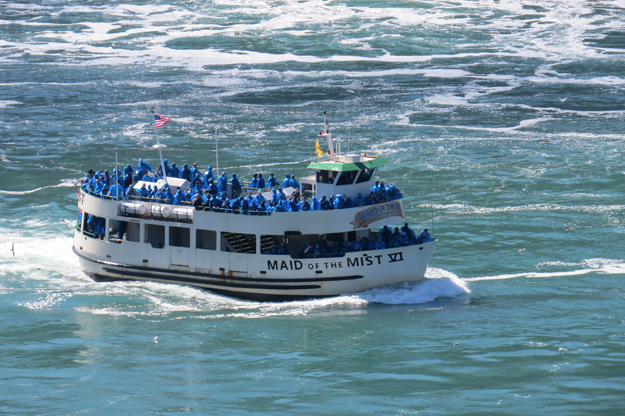 The Maid of the Mist

'Niagara Now' the place to be

Skyrocketing number of visitors in 2015

Hotels saw fuller occupancy and attractions are reporting record numbers. According to a release from the Maid of the Mist Corp., more than 1.4 million passengers from around the world boarded the boats during the 2015 season, which concluded later this year on Nov. 8. The company saw a 17 percent increase year-over-year. In the past two years, ridership is up 30 percent.

The iconic Maid of the Mist is accessible only in Niagara Falls, New York, and, despite a strong American dollar in Canada, the attraction was on sale at 30 percent off, and still had a record-breaking year.

Down the road at Rainbow Air Inc., ridership was also at an all-time high.

"We normally do between 475-500 flying hours a season; this year we did well over 600-plus hours," said Pat Proctor, vice president of Rainbow Air Helicopters.

In the epicenter of it at all is the Niagara USA Official Visitor Center, at 10 Rainbow Blvd., Niagara Falls, where the amount of traffic accounted for by staff in visitor services topped 100,000. That's a 161 percent increase over last year, according to Lana Perlman, director of visitor services for Niagara Tourism & Convention Corp. Guests made their way through the doors in search of information about what to do and see in Niagara USA.

In order to accommodate this new influx of traffic to the county, it's only fitting that additional inventory be on the market. Early last spring, the Wingate by Wyndham Niagara Falls opened on Rainbow Boulevard and repeatedly reported full occupancy this past summer.

The Fairfield Inn and Suites on Rainbow Boulevard is well-under construction and the Merani Hotel Group is fully rehabilitating the Fallside property - a compliment to the deconstruction of the Robert Moses Parkway adjacent to the site. The former Moore Business Forms building at John Daly and Buffalo Avenue also has turned into a construction site for a proposed Courtyard by Marriott.

We all wait with baited breath for the Hamister Group project to begin on Old Falls Street and anticipate the start of Wonder Falls, also on this main thoroughfare.

This tourism renaissance even extends outside of the downtown corridor. Niagara Falls Boulevard is seeing development, including a new Hampton Inn behind Bob Evans. Looking toward 2016, La Quinta Inn & Suites will offer 66 rooms to visitors. It was recently reported Driftwood Suites would build four townhouses where a go-cart attraction currently exists, also on Niagara Falls Boulevard.

Headed north toward Lake Ontario, Bruce and Lisa Erck, owners of The Fly Inn Lodge in Burt, saw their property at full capacity every weekend from May through October, which they said has been the case over the past three years. Guests who tour the Niagara Wine Trail USA, fishermen, business travelers, tourists and out-of-town friends and families enjoy staying at this unique property.

Michelle Blackley Glynn manages global media relations for the Niagara Tourism & Convention Corp. She is also an adjunct instructor at Niagara University and the host of "Niagara Now" on LCTV. Follow her on Twitter @shellblackley.