Renovations have been made to the entranceway of the Carnegie Art Center, 240 Goundry St., North Tonawanda.

Carnegie Art Center is back, invites WNY to join in the arts

The Carnegie Art Center has a history in North Tonawanda as a space where the arts have thrived, serving as an outlet for local, national and even international artists to show their work.

Along with work to revitalize the structural integrity of the Carnegie, other efforts have been made to ensure the center's future would be continually established as an arts entity, as well.

"Up until the early '70s, it (the Carnegie Art Center) was a library and then the City of North Tonawanda built a library over on Meadow Drive," said Cindi O'Mara, a member of the artist advisory committee for the Carnegie Art Center. "In the meantime, this became an art center with a number of different changes, but it was always an art center. Over the past, say, 20 years, it was primarily a place to put up some strong exhibitions."

"It has also been a place for students of our schools to display and become familiar with other artists and to encourage them to pursue their interests and talents," North Tonawanda Mayor Arthur G. Pappas said.

Arts education programs and classes have been provided through the Carnegie, making it an important resource for budding artists.

"The whole purpose (of supporting the Carnegie Art Center) is to keep it as a cultural center, to promote the talents that this community has," Pappas said. "We have singers, we have musicians, we have poets, writers, (visual) artists themselves, and this is a good venue for them."

The last event at the Carnegie Arts Center was held about a year ago, before the renovation process began, explained Barbara Hughes of Wheatfield, vice president of the Tonawandas' Council on the Arts Inc., whose members provide strategic planning for the organization. "We knew that we couldn't schedule anything at that point, because we were anticipating the work that was going to be done. So we took that opportunity to really look at the organization and reorganize it as a community arts entity."

"We have many, many talented people in our community and surrounding areas and I thought it (The Carnegie Art Center) should be kept as a cultural center, something that would help bring out the arts in our community as opposed to the building sitting vacant and turned into something ... beneath its dignity," Pappas said.

To help support the Carnegie, Pappas and city officials have been involved with promoting major artistic entities in the community since shortly after he came into office.

"We have brought together the boards of the Riviera Theatre, the Carrousel Museum and now the Carnegie Center. They are now periodically meeting together to help promote each other and to bring out the arts much more than they have been in our community and even in Niagara County," Pappas said.

In addition to working with these groups, "We (the members of the Tonawandas' Council on the Arts Inc.) created the artist advisory committee," Hughes said. "They give us recommendations of the exhibits ... things that we can do to sustain the organization, because that's really what we want to be able to do."

Joyce Hill, another member of the artist advisory committee, was one of the local artists who held an exhibition at the Carnegie.

"Cindi O'Mara asked me to be on the advisory board as a longtime artist being involved with the community ... so I said yes, and we are basically helping to support the gallery anywhere we can and get it going again for all the many artists in Buffalo that really want to be here and exhibit. It's such a great space," Hill said.

Renovations to maintain the valued space offered by the Carnegie Art Center include the installation of handicap-accessible bathrooms, refurbishment of classroom space, general structural repairs and more. These updates were made possible after the City of North Tonawanda was awarded a grant of $343,000 in October 2013 from the New York State Office of Community Renewal to make improvements to the Carnegie Art Center.

"This building (erected in 1903) is on the historic registry. We are the stewards of this building, so we are constantly ... trying to seek grants and just trying to maintain the building. With a building of this age, it is constant," Hughes said.

O'Mara explained that, with renovations wrapping up, the Carnegie's team of volunteer artists and supporters "came up with a fundraiser to help us get back on track."

The Carnegie Art Center will hold the Art off the Wall exhibition and fundraiser at 6:30 p.m. Thursday Dec. 3. The event features original artwork available for purchase at $20 apiece. All works will be hung in the gallery for attendees to view and shop.

Members of the Western New York community have submitted hundreds of 5-by-7 artwork pieces.

"There has been such an enthusiastic group of artists who have been coming in and donating their part - people will be able to find all sorts of medium," Hughes said.

All submissions required the artist's signature to be written on the back of the work. As a result, shoppers will not know who the creator is until after making their purchase.

"You may get a very nice piece of art from a famous artist, or you may get something that you really will treasure. So it really doesn't matter," O'Mara said. "That was the whole premise, and it's a way to get the community involved, too. So it's going to be really pretty awesome."

All proceeds from purchases made at the Art off the Wall event will serve as donations toward "programming, more exhibitions, classes for young people and adults," O'Mara said. "We used to have dancing here, music, kids classes, all sorts of activities, so we'll be bringing all this back on as we go, and that's what the fundraiser will be."

Admission for Art off the Wall is free for those who come at 6:30 p.m. However, attendees have the option to partake in an early viewing for first-choice purchasing at 5 p.m. for a $10 donation at the door. A complementary drink and hors d'oeuvres are provided with this donation, as well.

Both the Tonawandas' Council on the Arts Inc., and artist advisory committee for the Carnegie Art Center are made up of volunteers and members that share a passion for encouraging the presence of the arts in the community.

"Membership really helps support the programming. That really is what it does - that helps us with grant applications to know that we've got support of the community," Hughes said. "We're looking for volunteers, as well, to help us now as we come out of this. We want this building to be alive with people coming and enjoying it. That's what's really important."

Those interested in volunteering with the Carnegie Art Center or in becoming a member can visit www.carnegieartcenter.org. 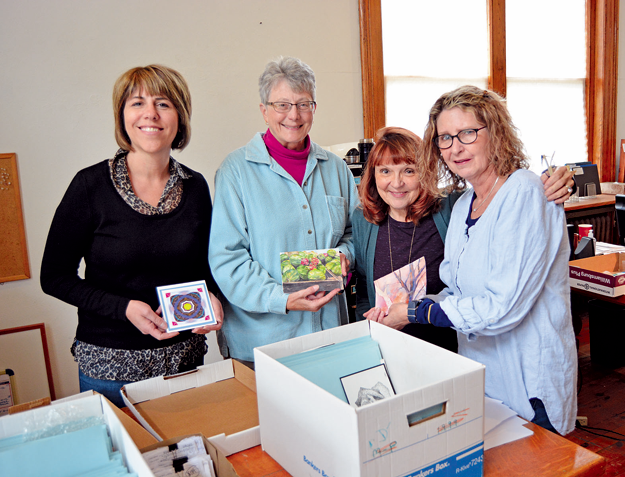 From left: Vice President of the Tonawandas' Council on the Arts Inc. Barbara Hughes, displays submitted artwork for the Art Off the Wall exhibition and fundraiser with local artists Linda Bannas, Joyce Hill and Cindi O'Mara.