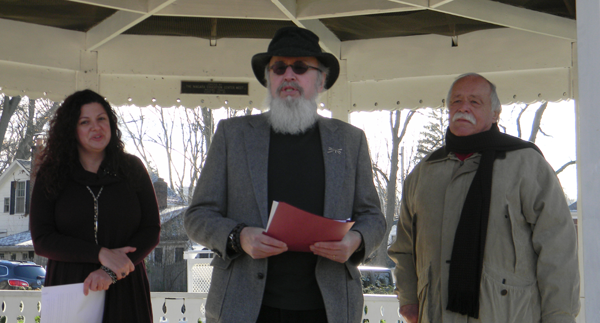 In the spirit of Thanksgiving, members of Residents for Responsible Government gathered Monday at the Hennepin Park Gazebo in Lewiston to express their appreciation for the end of hazardous waste landfilling at CWM Chemical Waste Services LLC in Porter.

The company accepted the final shipment at its Residuals Management Unit landfill on Balmer Road Nov. 12 and is now in a holding pattern as the state's Department of Environmental Conservation and the governor's appointed Siting Board determine the fate of CWM's application permit for a new RMU-2 landfill.

On a sunny, but chilly morning, there was satisfaction and hope among the RRG members, area local officials and those who support a cleaner northern Niagara County now and in the future.

"For the first time in decades, there has been no toxic waste put in the ground in our area. This is what we have all been fighting for all these many years, and the day has come.

"Even though this is a 'Red Letter Day,' we will celebrate when the issue is finally decided, (when) the Siting Board rules in our favor. That's the day. We cannot lose our vigilance. We have to stay the fight; we have contributed the funds that are necessary. Niagara County and Lewiston town have been very great supporters of this financially; we all appreciate that.

"I'm happy that this issue has the proper venue right now with the Siting Board and we'll pray. This is a week of Thanksgiving. ... We appreciate what is happening here for the benefit of our people."

RRG's Tim Henderson pointed out it has been a long time coming - more than four decades of community opposition to the more than 8 million tons of hazardous waste landfilling in Lewiston and Porter.

For northern Niagara, it all started way back in the late 1960s-early-1970s with EPA and DEC permits issued to Chemtrol Chemical Corporation (later SCA Chemical Services) to begin dumping toxic chemical waste in open lagoons in Porter.

CWM took over the 700-acre property in the mid 1980s and has been operating a hazardous waste treatment and landfilling facility there since. It received a DEC permit to open RMU-1 in 1994 and, over the course of 21 years, has landfilled 5 million tons, reaching airspace capacity earlier this month.

CWM is now seeking a DEC permit for a new RMU-2 landfill covering some 44 acres that the company forecasts to operate for the next 30 years. The permit application, filed by CWM in 2003, remains bogged down in a very complex DEC/Siting Board review process.

"When I first started in this struggle, I had dark hair and I was clean shaven," said Henderson, pictured center, a long-time advocate who first organized the area's campaign for a cleaner environment in the early 1990s as founder of Residents Organized for Lewiston Porter's Environment, or ROLE. "It'll give you an idea on how long it's been. This is a happy day for the Lewiston-Porter community. We no longer have to feel down in the dumps."

"RMU-1 has reached its permitted capacity, and CWM may not accept, treat or bury any more hazardous waste. After decades, our beautiful community will be out of the hazardous waste business," he said. "The benefits to our community from the closure of this landfill cannot be understated."

RRG President April Fideli, in her remarks, credited the stanch community opposition that began in the 1990s. It heightened in the early 2000s following a controversial community host agreement granted to CWM by the Town of Porter. It grew to responses on the state level in the form of new equitable hazardous waste siting legislation on affected communities such as Lewiston-Porter and the formation of a governor-appointed DEC Siting Board as part of the DEC permit review process.

"We are here today to say, 'Thank you,' and, to call on CWM to construct the final cap for its last toxic waste landfill as soon as possible," Fideli said. "We are thankful for the steadfast opposition of Niagara County residents against CWM's application to site one of the last toxic waste dump operations in the United States here for the next 30 years."

RRG states there are approximately 17 toxic waste landfills remaining in the U.S., with more closures anticipated in the next 10 years. CWM's Porter hazardous waste landfill has been the only such operating facility in New York and one of a handful in the Northeast.

"CWM submitted its PCB and toxic waste landfill application in 2003. Today, more than 10 years after they initially predicted approval from DEC, CWM is still struggling through a regulatory process with several mandatory requirements it cannot be expected to meet. We will save the discussion of those obstacles for another day," Fideli said. "Today we want to celebrate this milestone and keep the public safe."

"I have been fighting along with everyone here for the same reasons: To put an end to CWM," he said. "It goes back to me as a councilman, when groups like Tim Henderson and RRG came before the (Lewiston) Town Board. They were asking for a high-priced attorney; they felt they could do the job and stop CWM from existing. Through those 20 years when I was a councilman, to when I was a county legislator, I continued to support that, and I continue to support that today as an Assembly person.

Last week, CWM Public Affairs spokesperson Lori Caso told the Sentinel CWM operations have not ceased and "We do not anticipate a time when operations will end here."

"We are awaiting the decision of (Siting Board Administrative Law Judge Daniel O'Connell) from the Issues Conference. After that, the process continues with the Siting Board," she said.

Ceretto said he was encouraged for a hopeful decision from the governor's Siting Board and the DEC.

"There is something changing - it's Gov. Cuomo ... he's taken a position (with fracking and on other environmental issues). ... He's got a concern about the environment with his leadership; I think there's a change in the state; I think (it's apparent with) the effects that you're seeing.

"There is still no decision on CWM with their expansion, there's a delay right now, even to a point where Lee Simonson is on that Siting Board. That speaks wonders. There's a person right in this community that's been outspoken again CWM, that sits right on that board, that's from the community, that understands the issues. That's an appointment that's coming basically from the governor. It shows locally that there's a voice in this community. It starts with the leadership of Gov. Cuomo, and it flows down to the legislators, the local elected officials.

"I have a good feeling, that this is the end of CWM."