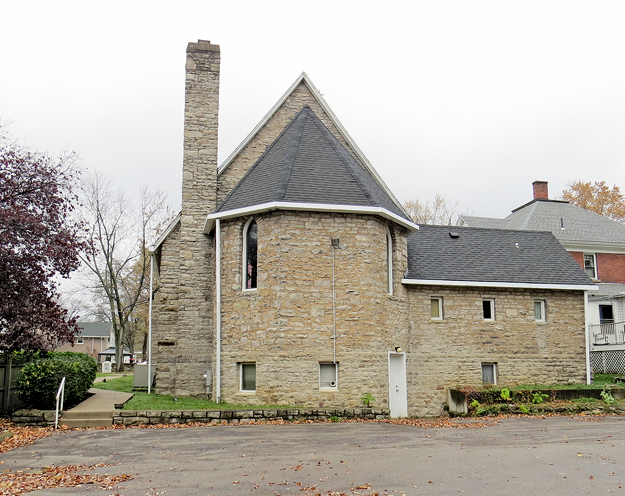 The future of the church on Plain Street is unclear now that a proposed sale is off.

Recent plans presented to renovate the church/theater on Plain Street in Lewiston have been put on hold. The Sentinel learned Thursday a deal to purchase the 114-year-old building fell through midweek.

"Our lawyer went to pick up the contract from the owner; we had met all of the conditions - the price, everything through all of this time," Claudia Marasco said. "When (our) lawyer called the owner's lawyer and said that he would like to get the contract ... he was just told that the owner has decided not to sell, and will give no reason why."

Marasco and partners Linda Radford and Carol Calato intended to purchase the property and convert it into a gathering place for jazz or cabaret-style music, family parties and small events. The Lewiston residents introduced their proposal to the village's Planning Board Nov. 9.

The idea was described in last weekend's Sentinel. Since then, "We've been hearing from a lot of people since the article was in the paper, and we've heard only the most complimentary statements from people," Marasco said.

"I have not had any (negative) encounter with anyone," she added.

"You think people were excited about just reading about it? Oh my gosh. When we talked to people, they are just over the moon about this," Marasco explained.

Public sentiment changed drastically, she said, upon news the project would not move forward.

"The expression from people ... it's an actual gasp for air," Marasco said. "Like, 'What? What? How? What?' It's just like they're very stunned. They're very shocked by it."

Marasco said a sale was pending. The three partners began working to acquire the building in July.

"We've done a lot of legwork and put in a lot of time," she said.

Members of the Village Board favored the idea of refurbishing and reopening the building at 409 Plain St., which was the original site of St. Peter R.C. Church (circa 1901). Artpark & Company and Niagara University most recently used the venue for theater productions.

"I think you've got three women who are really going to put their heart and soul into this, and keep a historic building from falling into ruin," Trustee Vic Eydt said at Monday's monthly board meeting.

"The outside, of course, is spectacular," Marasco said. "The inside, it needs work. And we know that. And that's why we wanted to take on this historic preservation, because we still believe strongly that she needs to be taken care of. And I'm not saying that the owner is in any way negligent. I'm just saying we'd love to have the opportunity to have the arts and music and whatever venues people needed in our community. And have the community be able to go into that beautiful building again.

"And we had a great vision and a superb architect. It would have been done very, very well. And the owners, I think would have, if given the chance for us, would have been very proud of what we would have accomplished."

Marasco expressed disappointment, but said, "We wish them no ill will. No bad feelings. It's just that we were quite stunned, as was the lawyer, and it's going to take us a while. Because it's like a bit of a grieving process. We were emotionally very attached, and we did not see this coming."