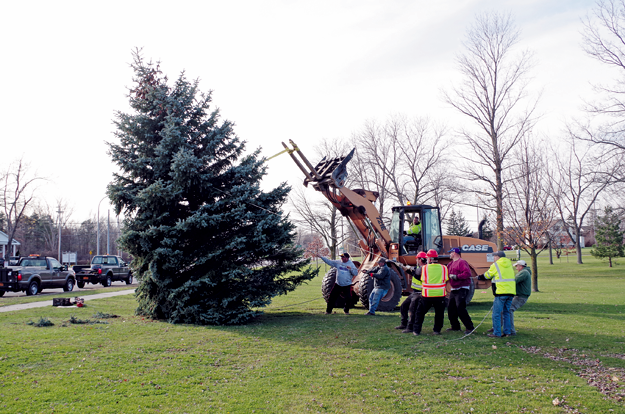 In a symbolic start of the holiday season, Town of Grand Island Highway Department personnel set up a 30-foot blue spruce in the Town Commons Tuesday.

Cindy and Kevin Hagen, the latter an employee in the Highway Department, donated the tree from their property, said Deputy Highway Superintendent Dick Crawford, who supervised the work. He said the tree was trucked from East River Road free of charge by LDC Construction, a corporate sponsor of Saturday's Light Up the Boulevard event. The tree will be lit Saturday as part of the fourth annual Light Up the Boulevard and Electric Light Parade and Festival.

Light Up the Boulevard

The fourth annual Grand Island Light Up the Boulevard Electric Light Parade and Festival, a joint venture between the Grand Island Chamber of Commerce and the Town of Grand Island, will take place Saturday, Nov. 21, in the town center.

For more details, call the chamber office at 773-3651, or go online to www.gichamber.org.

•Tree-lighting after the parade