Nathan McMurray won the Town of Grand Island supervisor's race after a canvas of votes Wednesday.

The two-vote lead McMurray held over incumbent Mary Cooke on election night Nov. 3 extended to 14 votes after counting of absentee and affidavit ballots Tuesday and a canvass of votes Wednesday at the Erie County Board of Elections in Buffalo.

"I'm very excited. But I am also humbled and thankful for the opportunity to serve," said McMurray Thursday via email from Ireland, where he was at a business conference. "I want to thank the current supervisor for all of her years of service and wish her and her family the best. I also want everyone on Grand Island to know that I recognize that this was a tight election. I will do everything in my power to not disappoint those who voted for me, and to win over those who did not. But whether you are a supporter or not, I will do my best to listen to and represent all of Grand Island in a manner that strengthens us, binds us closer together, and makes us proud."

Cooke, who was seeking a second term as supervisor, said Thursday she was at the Board of Elections for the counting Wednesday, a process that took three hours.

"This was quite an exercise yesterday," Cooke said of the counting process undertaken Wednesday. "Obviously I'm disappointed in the results and I would have preferred not to have it be so close that we had to go down there and do that, but I certainly appreciated the opportunity to see the process in action."

"I'm disappointed because I ran to win, but my biggest frustration is the campaign that was run," Cooke said. "The campaign run against the team I was on was negative and very personal and filled with half-truths and personal attacks, and that's in my opinion wrong. And so that's extremely frustrating."

"All of the very vicious attacks of me, other teammates on the ticket and town staff are gone," she said of votemcmurray.com.

"It's been an honor and a privilege to serve and I certainly am disappointed in the election results, but I also know that life will carry on and I'm looking forward to -- I don't know exactly what -- looking forward to the future," Cooke said about her plans. "There's going to be all sorts of opportunities that I haven't been able to do because of the time crunch, so that's an attraction. But I also have a lot of interest in the town and will continue to work on the projects that I did before I was supervisor and have great interest in." 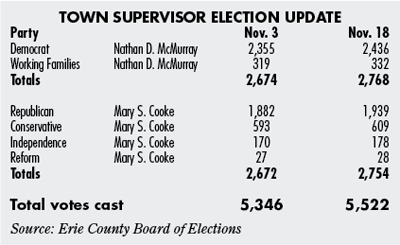