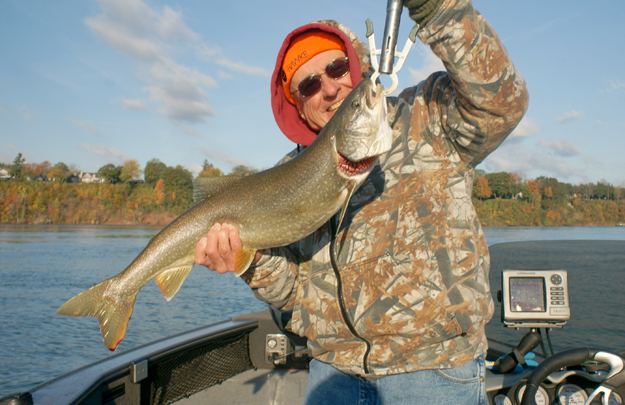 The lake trout season had just closed, so this fish was released back into the water.

In a few days I would fish the Niagara River with full-time fishing guide Chris Cinelli. The Niagara River is a wild, world-class fishery drawing people from all over the world. Anticipation of the experience-of-a-lifetime created the hope of success; I would not be disappointed!

This fishery is open 365 days a year and anglers can choose which species they wish to catch.

"During May, June, July and August, walleye are popular and, during June through November, small mouth bass enjoy a peak season. From November through May, steelhead, lake trout and brown trout are popular," Cinelli said as the 21-foot Lund boat drifted down stream.

"Lund boats are the Cadillac of fishing boats; they are stable and I run (one) 365 days per year. This is my fourth Lund boat!" he said.

The falls were formed when glaciers receded during the last ice age, known as the Wisconsin Glaciation period. Water from the newly formed Great Lakes carved a path through the Niagara Escarpment en route to the Atlantic Ocean. More than 6 million cubic feet of water falls over the crest line every minute in high flow and almost 4 million cubic feet on an average.

The boundary line was originally drawn through Horseshoe Falls in 1819, however it has been in dispute due to natural erosion and construction. The falls generate hydroelectricity with over a million gallons of water per second flowing over the 180-foot high cliff. The falls are one of the natural wonders of the world with a vertical drop of 165 feet. When vertical height and flow rate are measured, Horseshoe Falls are the most powerful waterfall in North America.

Autumn was an ideal time to visit the falls. The foliage exploded in an array of colors, including burgundy, blends of orange, yellow, reds and browns. The area received national recognition when the Huffington Post named Niagara Falls fourth on its list of top destinations for experiencing fall colors in the United States. USA Today ranked the area in the top 10 places to view the colors.

Although I had visited Niagara Falls, New York, in years past, I had not intimately experienced her - until now!

Cinelli and I boated up river to fish for steelhead and lake trout. The magic of the moment caught me as I gazed at the multicolored trees along the banks of the Niagara River.

Suddenly, the rod tip bent double, a fish was on and the dance began. The line continued to peel from the reel.

As the fish surfaced for the first time, Cinelli announced, "It's a steelhead!"

"Let the fish take the line. Lift the rod tip up and reel on the way down," he advised.

The fish surfaced again, but was too fresh for netting. It dove again in an attempt to free itself.

"That time he saw me," Cinelli added, as line was stripped from the reel. Finally, the fish was boated.

The successful lure was a quick fish, which replicated a wounded bait fish and was made by Lure Jensen. The main line was 10 pound with 8-pound flora carbon on the leader.

"The quick fish resembles a wounded bait fish and, as the sun came up, the silver-blue colors flickers in the sunlight," attracting the hungry fish, Cinelli said.

"Steelhead need to (be) over 21 inches, while the Lake Trout Season just ended, in order to protect the naturally reproducing trout," Cinelli explained.

The next fish was larger and fought with persistence. Eventually, however, a lake trout was boated. Photos were frozen in the moment before releasing the fish into the wild river.

The Niagara River draws people from all over the world. The fishing adventure of a lifetime awaits, offering steelhead, lake trout, salmon, small mouth bass, walleye, Muskie and sturgeon.

•Did you know that:

Tourism is the second-largest industry in Niagara County? The first is agriculture.

The thunder waters of Niagara Falls divide a river above and below? The connection between the two Great Lakes: Erie and Ontario.

Olcott Beach was named the "Ultimate Fishing Town" in 2012 by World Fishing Network?

Niagara Falls State Park is the oldest state park in the U.S., celebrating its 130th birthday in 2015? The park draws more than 8 million visitors from all over the world each year. 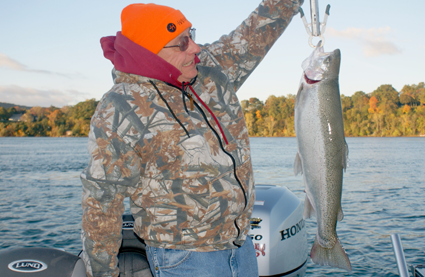 A steelhead from the Niagara River put up a fight unlike that of Great Lakes fish.