Approximately 150 members and friends of the Grand Island Historical Society were treated to an oral history of the Great Depression and World War II from the perspective of the president of the United States, with actor Albert McFadyen portraying Franklin Delano Roosevelt Nov. 5 at Historic Trinity.

McFadyen, who first portrayed Roosevelt in a production of "Annie" in the late 1990s, said, "That's when I found my FDR. I performed that role at Villa Maria and at the Lancaster Opera House."

Roosevelt was the first person with a significant physical disability to be elected president. He contracted polio in 1921 at the age of 39. With the support of his wife, Eleanor, he continued his political career and was elected president in 1932, defeating incumbent Herbert Hoover. 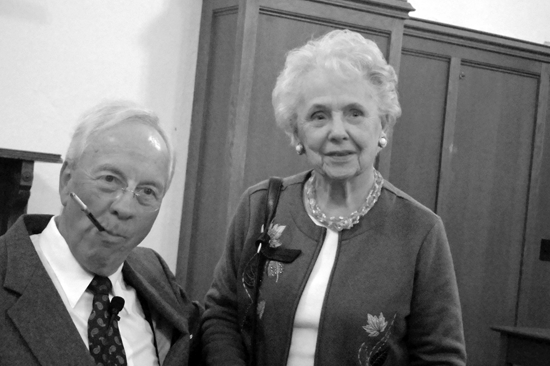 Albert McFadyen, as President Franklin D. Roosevelt, and Shirley Luther, who lived through the Great Depression and World War on the Island, read a fictitious letter from a "12-year-old Shirley Luther," a student at Sidway School, who asked President Roosevelt to remember the forgotten man. She said that her dad had lost his job at Carborundum and that the family had to pay the rent or be evicted. Although the letter was fictitious, Luther said that her family did endure hard times during the Great Depression. (Photo by Alice E. Gerard)

Roosevelt began relating his story with the 1932 Democratic National Convention, when he talked about a repeal of the 18th amendment (prohibition). "Americans like their beer," Roosevelt said to a cheering audience. After being elected in a landslide, Roosevelt was sworn in on a cold, dismal day in 1933. During his inaugural address, FDR said, "Millions are unemployed, homeless, and hungry." People were living in Hoovervilles, which were shantytowns constructed by the unemployed and destitute during the early years of the Great Depression. "This great nation will endure. It will survive and prosper. The only thing we have to fear is fear itself," FDR said.

As Roosevelt, McFadyen shared songs that were popular during the era. He talked about his favorite music and about people's reaction to his singing, which, apparently, Roosevelt actually did, according to McFadyen.

FDR sang "Brother, Can You Spare a Dime" (lyrics by Yip Harburg and music by Jay Gorney). The song, which was written in 1930 for the musical "Americana," expressed the anger of people who fought in World War I, built railroads and skyscrapers and grew the food at having been cast aside when their work was finished.

Roosevelt said that he received many letters from citizens from dire straits, asking for help. "The letters brought tears to our eyes," FDR said. "We couldn't help everyone."

Roosevelt told the American people through speeches and fireside chats on the radio that he was offering Americans a new deal and new hope.

Roosevelt and his administration worked to ease the nation's severe economic problems. They started programs, such as the Works Progress Administration and the National Recovery Act and the Civilian Conservation Corps. Among the projects completed by the Civilian Conservation Corps., under the direction of the U.S. Army, was Beaver Island State Park's Casino-Bathhouse, which burned down in 1992.

The president said that life was not always grim during the 1930s. The American people were entertained by movies that took them away from their "daily cares and despair to a magical place." In 1939, Hollywood produced movies at a "fabulous rate," including "Gone with the Wind," "Gunga Din," and "The Wizard of Oz." Roosevelt led a spirited chorus of "Mairzy Doats," a novelty song written by Milton Drake in 1943.

Dangers lurked overseas. "Things were getting dark," Roosevelt said. Japan attacked China in 1932. Nazi Germany occupied the Rhineland on March 7, 1936, and Austria and Czechoslovakia in 1938.When Germany took over Poland in September 1939, war broke out in Europe. Roosevelt talked of his antipathy to war: "I hate war. There will be no blackout of peace in the United States."

There was, however, a blackout of peace after the Empire of Japan bombed Pearl Harbor on Dec. 7, 1941. Roosevelt said he heard about the attack, while listening to the radio. The announcement of the attack interrupted a performance of Glenn Miller's "Moonlight Serenade." On the USS Arizona, 1,177 sailors, many still asleep on their bunks, were killed. Roosevelt said that Dec. 7 was "a date which will live in infamy." The attack was "unprovoked and dastardly." The United States declared war on Japan and, shortly afterward, Nazi Germany declared war on the United States. Roosevelt talked about the battles in the Pacific and in Europe. He sang World War II songs, including "I'll Be Home for Christmas," recorded by Bing Crosby in 1943.

At home, there was food rationing, scrap drives, gas rationing, restricted travel and victory gardens. Women helped the war effort by taking the industrial jobs vacated by the men who were serving in the military. "We could not have won World War II without the women of the United States," Roosevelt said. FDR was the first president to appoint a woman to a cabinet post. That woman, Frances Perkins, became secretary of labor.

In February 1945, Roosevelt went to Yalta, Russia, to confer with Winston Churchill and Josef Stalin. He died of a cerebral hemorrhage April 12, 1945, in Warm Springs, Georgia.

One interesting tidbit about Roosevelt was that, as governor of New York state, he had visited Grand Island in 1920, after being invited by Robert Moses. Roosevelt had toured the locations of potential bridges to the mainland. At the time, there were no bridges, just ferries. He also visited Buckhorn and Beaver Island.

Nestark described the response to McFadyen's portrayal of Franklin Delano Roosevelt as "overwhelming. The program couldn't have gone better. We will consider doing (this type of program) again next November. It was one of our better outreach programs. This encourages people to become new members. It also encourages people coming to the museum (River Lea) so that they can see the beauty of the museum and why we love it so much."

In addition to playing Roosevelt, McFadyen has been seen as Rudolph Reisenweber in "Hello, Dolly" and Father Seamus McMurphy in "Finnegan's Farewell." He recently played the role of a mad scientist doctor who created zombies in a locally produced zombie apocalypse movie titled "Stand Off." The movie played on November 11 at the Eastern Hills Cinema.