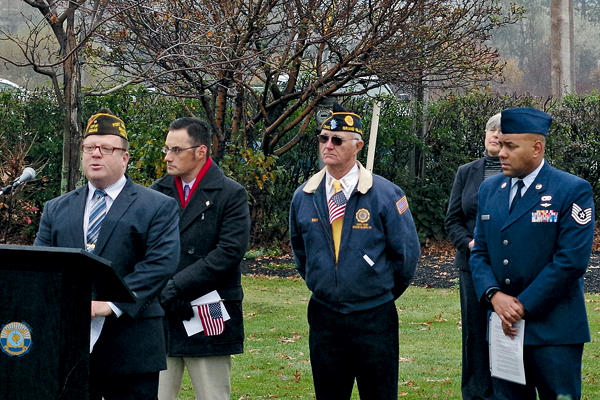 During Wednesday's annual town ceremony, held this year at DeGlopper Park, veterans announced the impending acquisition of property adjacent to the park that would allow additions and improvements to be determined with community input.

Mike Mehltretter, on behalf of the Grand Island American Legion Post No. 1346 and the VFW Post 9249, said "all the pieces are in place" for expanding the park to the adjacent parcel that was once home to a gas station between the park and Adrian's Custard and Beef. Turnover of the property is expected within 30 days, Mehltretter said.

A preliminary schematic of a design for the park was set up along Grand Island Boulevard at the park.

The new design would further recognize not only Charles DeGlopper, "but also the other veterans and service members throughout the Island over the years," Mehltretter said. "So many, so many, have contributed so much to the lifestyle that we enjoy on a daily basis."

Erik Anderson, chairman of the Charles N. DeGlopper Memorial Expansion Committee, said the process to expand the park picked up steam a month and a half ago. Discussions have taken place among the Grand Island Moose Lodge 180, the VFW and American Legion. The park, at the intersection of Baseline Road and Grand Island Boulevard, would undergo expansion that could include:

•Addition of a tank/military equipment.

•Adjacent to the flagpoles, the addition of a 13-foot by 30-foot granite monument wall engraved with the names of Grand Island servicemen.

•Pavers surrounding the wall. Family members of veterans may purchase one of the 30,000 pavers and have it engraved with their loved one's name.

A working group to plan for the expansion includes members of the local Boy Scout troops, the military service clubs, and the Grand Island Moose Lodge. The project manager is Dan Drexelius of Double D Construction.

Input on the plans is welcome, said Anderson, who is also the governor of the Grand Island Moose Lodge 180 on Grand Island Boulevard. He said the all-volunteer committee will meet at the lodge, 2524 Grand Island Blvd., at 7 p.m. Dec. 14 to discuss the expansion, which he called a community project.

"We're trying to get as many groups involved that want to be involved," Anderson said. "We want people to come and listen to the meetings, give us ideas, give us thoughts, ask questions."

One purpose of the park expansion would allow for a greater educational component regarding the Island native for whom the park is named. He said a lot of people don't know the story of Charles DeGlopper, who died during the D-Day invasion in World War II and later received the Congressional Medal of Honor.

"We want it not to just be a place for the veterans to come, but we want it to be a learning experience for kids, for people to be able to see family member's name on the wall," Anderson said, adding the park would be a place where "people can come and reflect, sit down and look and say, 'there are people in the country that are like this, that give the ultimate sacrifice.' "

"If you want to have a say for something special in your community, now is the time," Mehltretter said.

Donations to the project should be made payable to: Charles N. DeGlopper Memorial VFW Post 9249 (write on the memo line "DeGlopper Expansion"). Mail to the VFW at 2121 Grand Island Blvd., Grand Island, NY 14072.