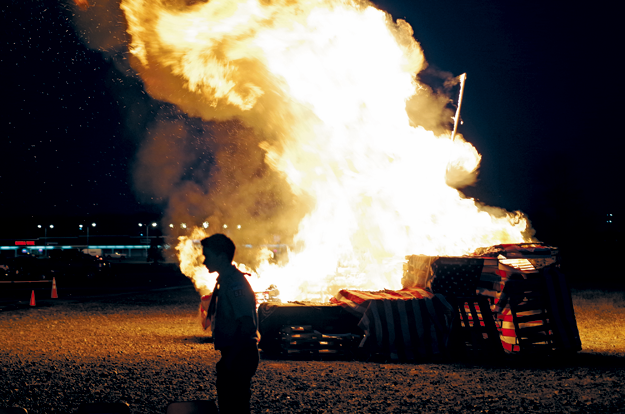 Hundreds of American flags are retired into ashes during the Watchfire ceremony in Martin's Fantasy Island Wednesday. (Photos by Larry Austin)

A new Veterans Day tradition on the Island began Wednesday with more than 100 attendees witnessing hundreds of flags retired to the flames.

The first Watchfire event, following in the footsteps of a similar event in Syracuse, took place at dusk in Martin's Fantasy Island. The event served to both retire unserviceable American flags and honor veterans.

William Soos made organization of the Watchfire part of his Eagle Scout project with Troop 510 out of Trinity United Methodist Church. He had accumulated surplus flags while conducting a Stars of Our Troops project, during which he sent embroidered stars from retired flags to service members.

Wednesday's event mirrored one held in Syracuse. Patrick Soos explained that his wife and sons witnessed the Syracuse Watchfire while on a trip to see his brother, John.

"The Vietnam vets of that area have been hosting a Watchfire for almost 30 years. Seven thousand people attend the Watchfire there, and the size of the fire is about 20 tons. It's bigger than a house. And they'll spend all day in recognizing the veterans while retiring flags at the same time," Patrick Soos said. He said he hopes other communities in Western New York will join future Watchfires. 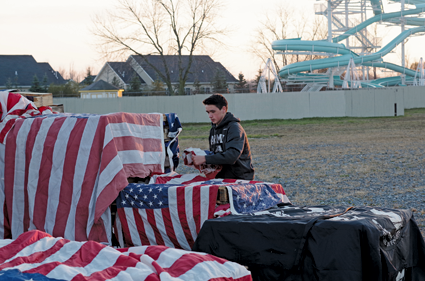 "It's pretty inspiring," Williams Soos said of the Watchfire in Central New York, which he estimated is 15 times the size of the Grand Island edition. "You don't think of Veterans Day as a really huge holiday, but after seeing everybody in Syracuse coming and paying their respects by retiring their flags, I thought it was just amazing."

Like his father, he said he hopes the Island will support a Western New York edition.

The Watchfire mimicked the military tradition that following a battle or long march a large fire is set so those lost or missing could locate and rejoin their comrades.

"Using that time-honored model symbolically, we use the warmth and light of the Watchfire to guide everyone to join us in reflection of those comrades who have gone before us and made our nation strong through their service and sacrifice," Patrick Soos said.

Veterans in attendance Wednesday were recognized at the ceremony, which included a color guard and playing of taps. 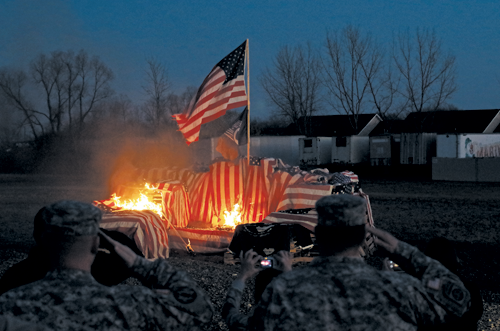