Veterans who currently reside or have once resided in the Town of Niagara are welcome to register for the event free-of-charge by calling the town's recreation office at 716-297-5243. Additional guests can purchase tickets for $10.

Town of Niagara Supervisor Lee Wallace, with the support of the Town Board, spearheaded the idea of the Veterans Appreciation Dinner.

"I just believe that the veterans need to be recognized," Wallace said. "It's time to recognize them for the sacrifices that they've made."

The Town of Niagara Industrial Development Agency provided the funds that were ultimately designated toward the dinner.

In response to Wallace and the Town Board's decision to present the Veterans Appreciation Dinner, Town of Niagara IDA Chairman and World War II veteran Calvin Richards said he was "very honored."

"We enjoy the freedoms we enjoy because of what they (the veterans) sacrificed, and so it's the least we can do," Wallace said.

"I think Mr. Wallace came up with a great idea ... to remember all the veterans, all the men and women," Richards said. "It was an honor to serve my country ... and it's just an honor to feel appreciated."

Future plans for a veterans memorial to be located in Veterans Memorial Community Park will be discussed at the dinner, providing local veterans with some insight on what the town is working toward in their honor.

"They'll have a short program about the memorial and what we plan on doing down the road," Wallace said. "I'm hoping it will gain them some pride. ... We want to honor them."

Although the memorial has not yet been approved and the overall concept is still in the design stages, veterans will be able to see a rendering of what the town is planning to create.

"What we're planning on doing is putting eventually a nice memorial up there with a remembrance walkway where every year we'll enshrine people into the walkway," Wallace said. "We won't be doing that this year, but we're going to lay the groundwork for it through the dinner."

"It's something long overdue; it's something everyone remembers one day a year - Veterans Day - and then after that it kind of disappears," said Mark Dembitsky, hall committee chairman at the Town of Niagara Active Hose Co. "This will be something that, every time somebody comes in and out of the park, they'll be able to see it, they'll be able to enjoy it and remember."

Fittingly, Dembitsky helped coordinate the Veterans Appreciation Dinner as he completed 28 years of military service - eight as a firefighter and 20 as a flight engineer - at the 914th Airlift Wing at Niagara Falls Air Reserve Station. Throughout the years, he also served as a volunteer fireman in the Town of Niagara.

"Hopefully, we can make this an annual event," Dembitsky said. "It doesn't matter what branch of service, act of duty, reserve, retired guard, marine ... anybody that served."

Information on topics such as health care benefits also will be provided at the event by the Niagara County Veterans Association. A representative will be available to answer any questions and a table of resources will be available.

The event will be catered by Gagster's Restaurant of Niagara Falls, which is known for its classic American cuisine. "It won't be hot dogs and hamburgers, I can tell you that," Dembitsky said with a laugh. 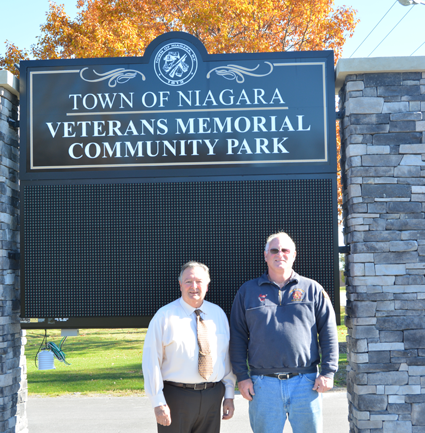