Panepinto began a series of monthly stops at schools in his 60th Senate District with a tour of the Grand Island Central School District's addition that integrates education in science, technology, engineering and mathematics.

The building, part of the ongoing $51 million capital project, opened in September 2014.

"I'm frankly blown away," Panepinto said when asked of his first impression of the building. He received a tour of rooms in the wing from tech teachers Eric Cohoon, Carl Koppmann, Jonathan Shelley and Shawn Sweet. "It's not my technology class or my dad's technology class."

"We've integrated high-tech equipment that has computer and electronic applications into what used to be stigmatized as sort of the vocational track in school. And I look at this as an opportunity to enter into the new economy, because not every kid is going to be a businessman or a businesswoman or a professor or a teacher, and this gives them an opportunity to understand different tracks of careers in life that are good-paying, that are fulfilling, and that we need in our economy," Panepinto said.

He and members of his staff also met with Superintendent of Schools Dr. Teresa Lawrence, Assistant Superintendent Robert McDow and administrators Dan Quartley, Mike Carter, Corey Gray, and John Fitzpatrick Wednesday in the district offices before taking a tour of the STEM wing.

Carter told Panepinto the kind of students in tech are "academically focused," but also like to work with their hands at the same time, so they differ from the BOCES career students who study programs in welding or cosmetology.

Lawrence and Carter said the district offers different types of programs that complement rather than compete with those offered by BOCES.

"We have a huge number of kids that still go to BOCES," Quartley added.

Panepinto said following his tour he can promote the GI tech system in two ways.

"First of all, we can make sure that there's funding available on the state level to promote these kinds of programs," he said. "That's No. 1. And No. 2, is talk about the positive impact that the educators of Grand Island have on their students' lives. There's too much today of pointing at administrators and teachers of not doing enough. And this is an example of them doing so much."

He called the STEM wing "a manifestation of the commitment of the educators in the Grand Island district, which has to be promoted and used as a shining beacon for other districts."

Panepinto learned first-hand that there is never a dull day in tech. Administrators told Panepinto the GIHS tech program has to be seen to be believed.

"Trying to describe what those guys are doing down there is pretty hard to do until you see it," Quartley said. "Because when you look at what they're actually producing down there, it's shocking."

McDow concurred, calling the program one of the most startling things he saw when he came to Grand Island from another district.

He said GICSD has one of the largest BOCES programs around, but then another 100 students studying technology every day.

The technology program, as well as programming in business education, illustrates the district's commitment to expanding opportunities for students.

"We're just trying to do everything to make as robust a program as possible," Lawrence told Panepinto. "How do we grow without breaking the bank, how do we honor the public interest and public dollar while completely and totally optimizing the opportunity for students." 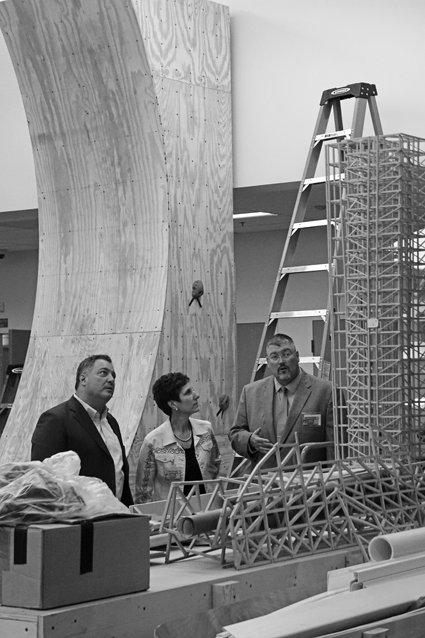