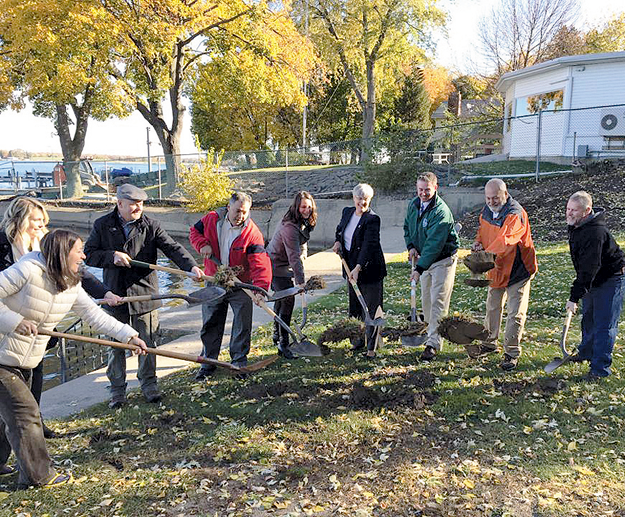 Ground was broken at the Sandy Beach Park Club on Monday for a project that will provide a facelift for the beach. The concrete bulkhead wall will be removed, and a living shoreline, with native plants, sand and other biological materials, such as logs, will be installed. A living shoreline can employ rocks and boulders placed in the water, tall grasses, and flowering plants.

The groundbreaking ceremony was attended by representatives from the Town of Grand Island, the town's Conservation Advisory Board, the Greenway Commission, the Greenway Ecological Standing Committee, Buffalo Niagara Riverkeeper, the New York State Department of Environmental Conservation and the Sandy Beach Park Club.

The goals of the restoration project are to remove hardened surfaces, such as bulkheads or riprap. Riprap is large, loose stones. The natural slope from the shore to the river is restored, and native plants are put in. These native plants would include tall grasses and perennials, as well as shrubbery. Common perennials in this area include black-eyed Susans, coneflowers and joe-pye weed.

Trees are often included in a living shoreline. They would be trees that tolerate wet roots well, such as swamp white oak, pin oak and willow. The deep roots of the native plants help to reduce soil erosion.

The benefits of the living shoreline, according to Buffalo Niagara Riverkeeper, include providing an attractive natural appearance to the shore, improvement of marine habitats and fish spawning areas, reduced erosion, and improvement of water quality.

A living shoreline is more likely than a hardened shoreline to filter out water pollutants.

Jill Jedlicka, executive director of Buffalo Niagara Riverkeeper, said the project will improve the habitat of such fish as the emerald shiner and the lake sturgeon.

According to the National Oceanic and Atmospheric Administration, a hardened shoreline can actually increase the rate of erosion. Water slams into the hard surface and washes over the bulkhead. The ground beneath the bulkhead begins to wash away.

"Grand Island is the heart of the Greenway," she said. "We have 23 miles of shoreline. Anything that will improve the shoreline is great for Grand Island. I wholeheartedly support this project."

People are encouraged to watch the project as it develops. "It will be helpful for people to see its progress," Cooke said.

Cooke noted she was impressed by the wide variety of organizations that were either working on or supporting the restoration project.

"That kind of cooperation bodes well for a successful project," Cooke said. "We are using resources in a good way to get things done."

Construction of the living shoreline will begin in early December and will be complete by the spring of 2016. The Sandy Beach restoration project will be the first of four or five shoreline restoration projects Buffalo Niagara Riverkeeper plans to complete along the Niagara River. Riverkeeper's long-term goal is to establish an ongoing living shorelines program in Western New York. 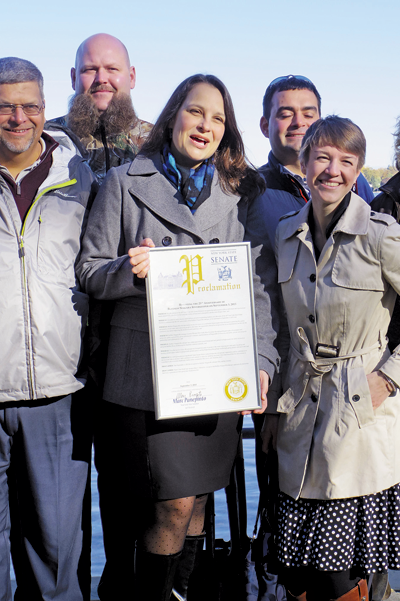