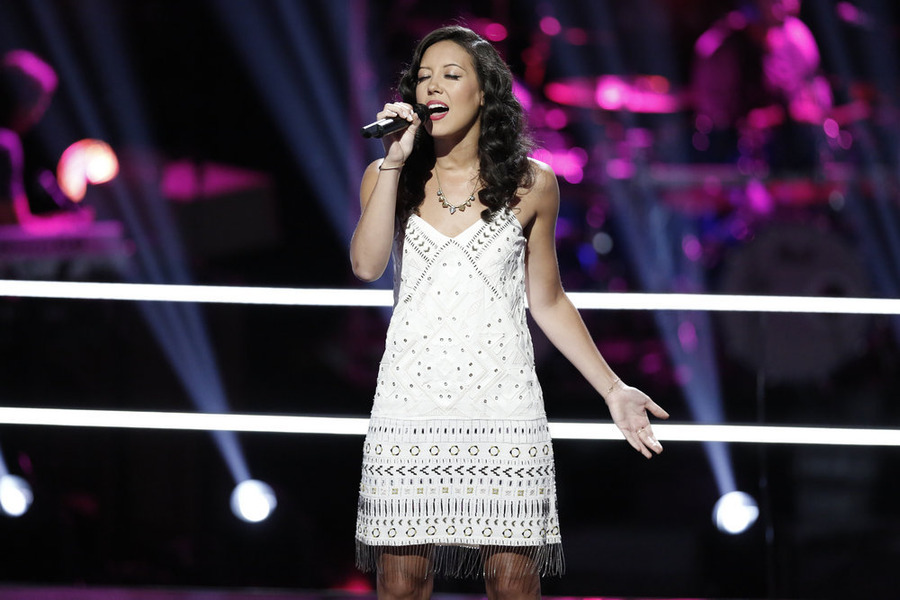 Season after season, singers on NBC's "The Voice" claim there is nothing harder than the "Battle Rounds." The competition's second stage pits two artists in a duet-duel, wherein each must find harmony while showcasing superiority to advance to the third stage, the "Knockouts."

What makes this stage so difficult is that it's unnatural for artists to compete in such a manner. No one goes to the local bar and challenges the person on stage to a winner-takes-all-loser-goes-home musical battle.

Moreover, how does one find vocal unity while trying to show singing supremacy?

Of course, this is a competition, and this round aptly prepares each participant for performing live, finding a way to sing different songs in different styles, and working for America's vote.

While each singer faces the "Battle Rounds" inherent challenges, some face additional obstacles. 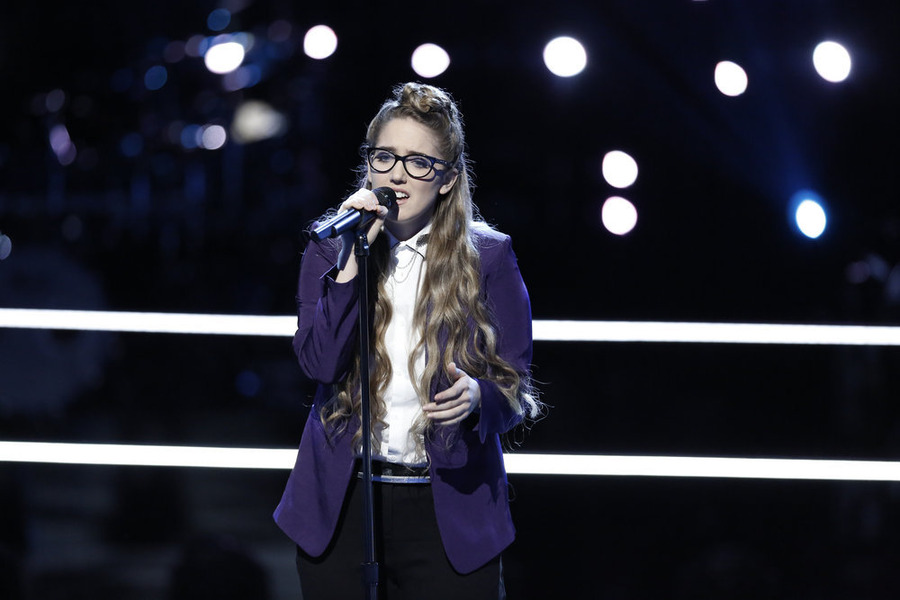 For Korin Bukowski and Blind Joe, their task was convincing the coaches they're more than a feel-good backstory - that they have talent sufficient to win "The Voice."

Korin overcame bullying and naysayers to earn a chair turn from Gwen Stefani and compliments from Adam Levine, Pharrell and Blake Shelton at her blind audition. In her "Battle Round," Korin faced off against Chase Kerby. They performed Regina Spektor's "Samson."

"Korin, the thing that you got, that's amazing, is this ability to kind of sail through this vocal and be super emotional and still perfectly kind of on pitch. It's very captivating," Adam said.

"I was mesmerized by that performance," Blake said.

"For me, music is about emotions, and there's nothing more emotional than what I just heard," Gwen said. "I die for that performance."

"I think what I like about Korin's voice is that she actually does have power behind it, and she's not just a regular girl," Gwen added. "She has style and I just look forward to being around that coolness."

Korin told BTS, "I've had a lot of growth since the blinds up until the 'Battles.' And I was happy they chose that specific song - Gwen chose that song - because it showed a lot of versatility to my voice that I was hoping I could show off more. And I always like a song that tells a story and conveys some sort of emotion, so that was good for me.

"And it was really also great to have a partner, because I learned a lot through my partner, Chase Kerby, of how to bring emotion to a song and how to bring your own style to a song. And yes, I just drew a lot from blinds to 'Battles' in accordance to style. I just felt I could bring something different to the song, because it was a lot softer than my blind audition song." 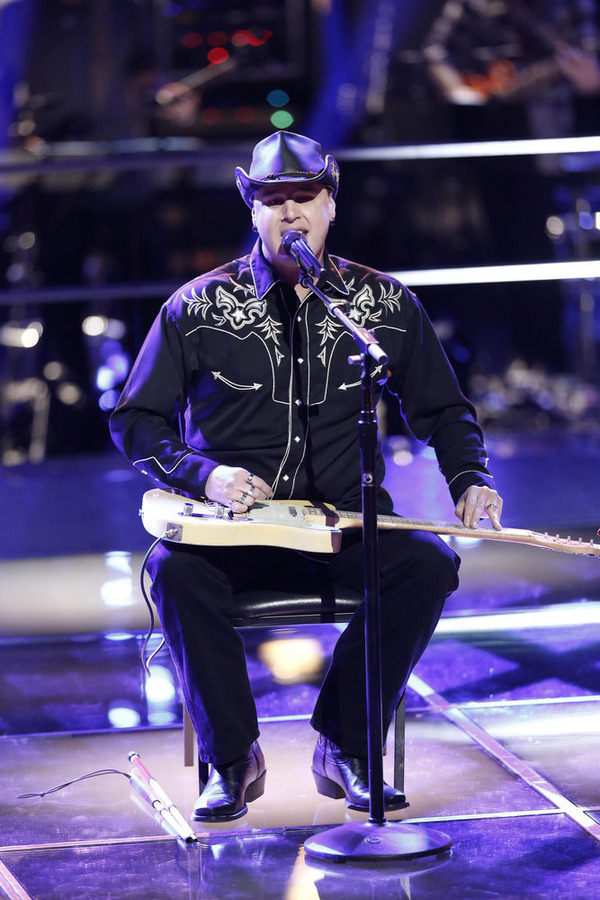 For Blind Joe, the challenge was proving he's more than his blindness. Sure, it's remarkable he can perform a slide guitar, but it's even more amazing to see him excel - and command a stage as well as any of this season's competitors.

"I didn't expect you to be as soulful as you were," Pharrell told Blind Joe.

"It's so incredible how we all are given our own gifts in life, and yours was to sing and play that guitar the way you do so uniquely," Gwen said.

Blind Joe battled Blaine Mitchell in a Bob Seger/"Old Time Rock and Roll" showdown. Not only did Blind Joe excel musically, but he "wouldn't be quiet in between all of (Blaine's) lines," Blake said, as the coaches laughed. "He's like, 'Say it again! Say it again!' ... But it was fun."

Blake said Blind Joe is "really special" and said he looked forward to working with him in the "Knockouts."

In between the audition and the "Battle Rounds," "I don't know necessarily that they talk more about how talented I am; it's just kind of more of what I got from the blind auditions, which was that it's a raw talent that I have going on," Blind Joe told BTS. "And I really, really appreciate hearing that.

"I think as far as growth, I was definitely more confident in the 'Battle Rounds' than I was in the blind audition, because I had - we had Blake working with us. That was really awesome. And then, of course, working with Blaine Mitchell, who was just such an extremely talented dude. And being able to feed off that solid energy that he has really helped me a lot.

"And it was just a great experience and we went into it thinking we both - no matter what happens - want to stay and we really poured our heart and soul into that performance. And I think it showed, and I'm really happy with it." 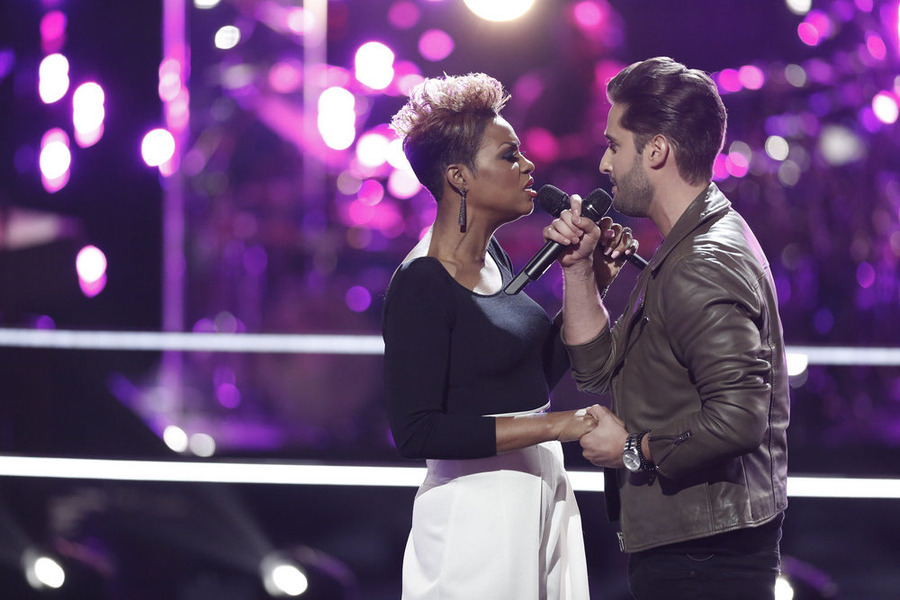 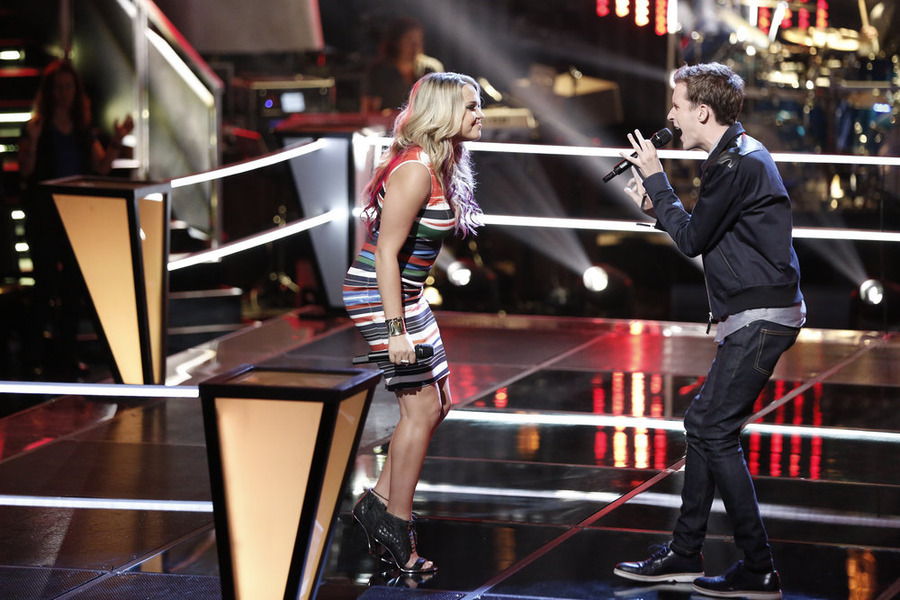 Four-chair-turns Viktor Király and Evan McKeel had to prove they weren't a one-night sensation - that they could equal or surpass the success they found in the blind auditions.

"One wouldn't assume someone from Hungary would sound like that - and it's amazing, and I think you're awesome," Pharrell told Viktor.

"You have such a beautiful voice," Gwen added.

Adam complimented the pairing's ability to connect. He said his decision was difficult, but, "Viktor singing the way he does it soulful and powerful - it's far too interesting to pass up."

Viktor told BTS his approach to the second performance of the season was simple: Forget the past.

"To be totally honest with you, I have - usually what I do is I go to a level," Viktor told BTS. "So, for example, I passed blind auditions with four chairs, which was absolutely amazing. But then I quickly try to forget that fact so it doesn't bother me in the future. I try to go back to zero and work myself up again. And this is exactly what I did when I started 'Battle' rehearsals with Cassandra.

"And also to be totally honest, when I heard - I think 'Battle Rounds' was the first time I actually heard Cassandra really sing and I got a little bit scared, to be honest, because she's absolutely amazing. She's a super-talented singer and I was a little bit afraid, because I didn't know if I could stand up to her standards of singing.

"But I did everything I could in my power to make the best out of the situation, and it seems like my hard work paid off."

Evan, meanwhile, partnered with Riley Biederer for Stevie Wonder's "Higher Ground." Though he wowed the four coaches when he sang some Stevie at his blind audition, he took this song to, well, even higher ground.

"I really enjoy watching you perform," she said.

"Stevie Wonder had this unbelievable voice that was also very high," Adam explained. "Beyond the fact that, Evan, you pulled it off, you did it so unbelievably well."

"Evan, I mean, you destroyed that performance," Blake said. "It was so good."

Like Viktor, Evan said he couldn't take past success as a guarantee of future advancement.

"I felt like the underdog in my blind audition. I was just fighting. I saw for the first two-thirds of that song I was fighting to even get on someone's team. 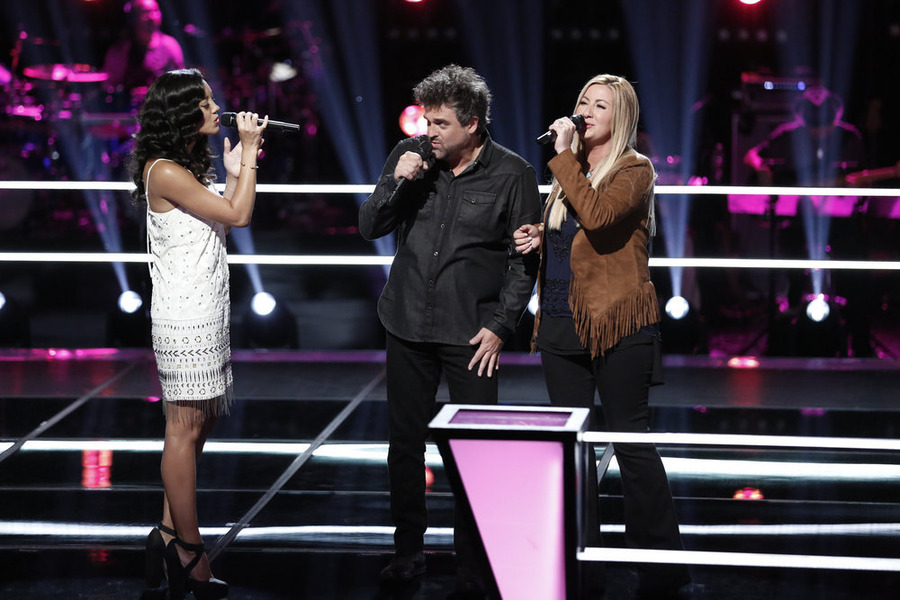 Amy Vachal had to compete against not one, but two talented singers, in the form of duo Jubal & Amanda.

Adam pointed out such a pairing could be awkward. Not only are Jubal & Amanda a duo, but they recently became engaged. Amy had an uphill "Battle," but she pressed past the challenge and established herself as a serious contender on "The Voice."

"You have a whole different thing, Amy, because your voice is so delicate and airy," Gwen said. "Her on her own ... she's a star."

"You were shining up there on your own as brightly as these two were together," Adam said.

"Amy, the most hurtful rejection I have ever had on this show is when you didn't pick me in the blind audition," Blake said.

"I just don't know how you move forward without Amy," he added.

"Amy, there's a delicate way about you and your approach to songs," Pharrell said. "I could only imagine people listening to your voice after having a really tough day. You just make everything feel like it's going to be all right. You're amazing."

"There's something really rare about Amy's whole approach, and I just felt like there's so much more to do with her," he added.

Speaking of her game plan heading into the "Battle," Amy said, "My mentality changed throughout, from the start of finding out that I was singing against not one, but two people for this duet - singing a duet with a duet. At first I was like - I was excited by it, because I'm still getting used to this whole 'Battle' mentality, that there's a winner and a loser at the end of each of these rounds.

"So at first I was really excited, and then once we started digging into it I realized just how challenging it actually was going to be, especially because not only our - there's two of them and one of me, but we come from very different backgrounds and our styles are very different.

"But I eventually came to embrace the challenge, and I think we all realize that this is an opportunity. It was a little bit weird that we were paired together. It was an opportunity to make something unique and new. So ultimately I'm grateful that we had this unique challenge."

"The Voice" continues Monday at 8 p.m. and Tuesday at 9 p.m. on NBC. For more, visit www.nbc.com/the-voice.