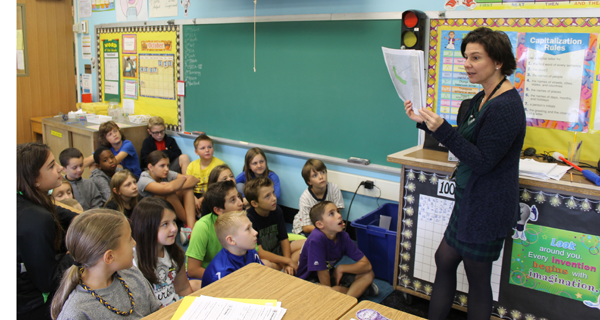 Teacher Tricia McDonald reads her new book to her fourth-grade class at Kaegebein Elementary School. "Wiggle, Squiggle, Squirm," a book for young children, was published this past summer. (Photos by Karen Carr Keefe)

Teacher Tricia McDonald has added author and playwright to her resume, and her fourth-grade students at Kaegebein Elementary are reaping the benefits as they learn to become authors, themselves.

Earlier this month, McDonald read her own book, "Wiggle, Squiggle, Squirm," to her class. The kids sat on the floor in front of McDonald and watched as each turn of the page revealed the twists and turns of a tale about Willy, a lost worm whose quest to get back home becomes a journey of faith. McDonald even did her own colorful illustrations for the book, published this past summer by Lighthouse Publishers.

To bring out her students' creative side, McDonald designates a "Thinker of the Week" as part of this year's theme "Thinking is Critical." One assignment is to take home the class pet monkey - a stuffed animal named Tasapio - for the weekend, then write about his adventures in the class journal. Tasapio gets his name from the first letters in each word of the phrase "Take A Smile And Pass It On."

McDonald was the first "Thinker" and role model to set the stage for her future authors, and her show-and-tell was about her book. "It gives me credibility, too, when I'm teaching them writing," she explained.

A teacher at Kaegebein for 22 years and a Grand Island resident, McDonald loves her profession, but is nurturing her other interest, as well.

"I have always wanted to write children's books," McDonald said. "I write plays every year for the kids to perform."

She also writes poems each year for her husband and their children, Ryan, 16, and Allison, 14.

"Everybody keeps telling me I need to get my plays published, and I keep saying, 'No, I need
to write a book and get it published.' " She thought once she retired, she'd write kids' books. "But then I took a class for how to get published," she said.

She wrote the first version of "Wiggle, Squiggle, Squirm" as a short story for that class, but she never sent it in to a publisher. And she kept writing. "I had all these stories, but I never did anything with them, because you need to take that final step, and I never did," she said. "I actually wrote two other books that I'm trying to get published - and this one."

She remembered her story about Willy the worm when a friend's son was diagnosed with leukemia. "So I just started thinking about God, and how He plans and He does things differently than what we have planned." She dug out her story and revised it, then sent it to her teacher. She adapted the story when her teacher said that Willy the worm needed to solve his own problem.

McDonald's son was the original inspiration for the story. She said that when he was very little, he used to pick up worms and ask them, "Do you want to fly?" - and throw them. "And that's where the whole story came from," she said. "So I couldn't take the boy out of the story, because that was the whole point of it." She brought God into the story, and her character ended up solving his problem by praying and believing.

After the story was finished, she called a Christian publisher and sent it to them. They agreed on an arrangement in which she paid them a sum to publish the book and she gets a percentage from book sales. She owns the copyright, so if another publisher wants to pick it up, it is hers to sell.

She said she didn't intend to illustrate it because her teachers had advised against it unless she was really good. "I'm artistic. I didn't think I was artistic enough to illustrate a book. But then when they sent me the illustrations, I was not happy with them and said, 'I really could do better.' " They agreed that she could do the illustrations. "That was kind of a neat little bonus that I did both."

As a published author, she teaches her students to use "bold beginnings" and "exciting endings," something that figures in the plays she writes for the class, as well. One of her favorite among the plays she's written is "A Bully's Tale," a spoof on Dickens' "A Christmas Carol." In her version, a boy's dreams feature a school principal of the past, present and future whose lessons help him change his bullying ways. The idea for the play came from the students in one of their class circle meetings, where they plan their learning activities.

McDonald said the theme of "Wiggle, Squiggle, Squirm" reflects how she approaches life and problem-solving. She is a parishioner of St. Stephen R.C. Church on the Island and has taught religious education classes. She started her teaching career at St. Andrew's Country Day School in Tonawanda. "I really enjoyed teaching religion to little people, and so when I got hired at Kaegebein, I actually told God if I get a job in a public school, I will still teach religion, and so I did."

She taught religious ed, or CCD as it is known, at her home church in Tonawanda, then at St. Rose of Lima in Buffalo after she was married. McDonald and her husband moved to Grand Island and started a family, then she resumed teaching religion when her son was old enough to take CCD. She now teaches home groups for both her son and her daughter and plans to continue until their confirmation. "I believe in God and I believe that's a big piece of who you are."

McDonald said when she writes a play, character education and making good choices are often the main themes. When she read her book to the class, she wanted to let them know she respects the fact that not everyone has the same beliefs "I did preface it with 'God is mentioned in it,' but that doesn't necessarily mean that that's something you have to do. This is just a story and it reflects my views."

The book is meant for young children and would be ideal as a read-aloud book from parent to child, she said.

McDonald donated a copy of her book to the Kaegebein library. She said the book fits in with a private school setting and she is not sure if public schools elsewhere would tend to keep a copy in their libraries.

McDonald said the librarian at St. Stephen School was very excited that she was going to be able to read it. She quoted her as saying: "I'm going to read this to all the kids and tell them that I know you."

The highest compliment, she said, was when her dad read the story to the young grandkids, and they clamored, "Read it again, read it again!"

McDonald said she has other books in the development stage, but she plans to continue teaching while pursuing a career that may ultimately flourish after she retires. "It's a dream for me, and I hope it's the start of a publishing career."

You can find the book on Amazon at www.amazon.com/Wiggle-Squiggle-Squirm-Tricia-McDonald/dp/1514831953. It also will be advertised on Lighthouse Publisher's website soon, she said.