Grand Islanders in the cast of the Theatre in the Mist musical production of "Hairspray," which will take place at the Niagara Falls High School Performing Arts Center Oct. 23 to 31, are from left, Catie Merletti, Sarah Swagler, Emily Pici and Jill Anderson. (Photo by Chris Swagler)

Theatre in the Mist's 'Hairspray' coming to Falls

Baltimore. Issues include acceptance, bullying, integration. But it's not today's news; it's 1962.

Theatre in the Mist will open its run of the Tony Award-winning musical "Hairspray" on Oct. 23, at Niagara Falls High School.

"It's very timely," said Joey Bucheker, "Hairspray" director and choreographer. "'Hairspray" is not only fun and enjoyable for all ages, it also has a good message.

As Tracy tells Edna in the "Welcome to the '60s" song in the play, "Things are changing, Momma."

Many of the younger members of the multiracial, American and Canadian cast didn't realize how much, Bucheker said, and it's become a topic for discussion.

"This generation doesn't see racism the same way," he said. "It's nice to see progress."

Jill Anderson of Grand Island returns to Theatre in the Mist to play Tracy's best friend, Penny, who is white, but dating a black youth named Seaweed.

"In the '60s, that's very controversial," the Grand Island High School senior said. "It's very interesting and almost scary to see how much segregation there really was. ... It's so amazing to see how far we've come in that battle for equality."

Gabriella Corsaro of Youngstown, a 2010 graduate of Lewiston-Porter High School and student at Niagara County Community College, plays the gym teacher and is in the ensemble in her first outing with Theatre in the Mist.

"(Bucheker) told us to watch the beginning of 'Selma' to understand what African-American people had to go through," she said.

Most young people today are used to interacting with other races in their schools and even might have someone of another race in their family.

"Everything is changing, but some people still hold grudges," Bieber said, explaining why problems still exist.

Bucheker is proud of the cast and crew put together for "Hairspray."

He followed the show's tradition of having a male play the female part of Edna. The three finalists for the role were all amazing, each giving a different interpretation to the role. In the end, he chose Adam Wall of Kenmore, a graduate of MUD (Makeup Designery) in Los Angeles and most known in this area for costume designing, not acting.

"He's over 6 feet tall and very, very funny," Bucheker said. "He was Edna, there's no question."

Another person that surprised Bucheker was Bieber, a member of the Niagara-Wheatfield Class of 2009 and NCCC theater graduate. Bieber has been a part of Theatre in the Mist for years, starting with "Joseph and the Amazing Technicolor Dreamcoat" and continuing through last year's "Fiddler on the Roof."

Bucheker said he knew Bieber as extremely talented and versatile, but at first couldn't see him as the romantic lead.

"He came in to audition and he was Link. That moment took my breath away. I didn't expect him to do that," Bucheker said.

For Tracy, he chose Sara Kovacis, a graduate of the Niagara University Theatre Department. When Theatre in the Mist took "Nunsense II" to the TANYS (Theatre Association of New York State) Festival several years ago, Kovacis won as outstanding performer overall.

Also, others who auditioned for the part of Tracy were very skinny little girls, Bucheker said.

"It's a show for a heavier girl. I refused to take a skinny girl and pad her up," he said, adding that he teases her that she needs to keep eating because she is losing weight due to all the dancing in the show.

Other Grand Island residents in the show include Sarah Swagler, Catherine Merletti and Emily Pici.

Among those from Niagara County are the father and daughter acting team of Christopher and Madalyn Teal from Lewiston. Others from the Lewiston, Youngstown, Ransomville, Lockport area include Caitlyn Stephenson, Grace Breen, Ian Brunner, Isabella Guerrucci and Zachary Beyer.

Normally based at the small Stella Niagara theater in Lewiston, Theatre in the Mist, in recent years, has adopted the tradition of starting its season with a big stage production at the Performing Arts Center at Niagara Falls High School, 4455 Porter Road, Niagara Falls.
Tickets are $18 for adults; $15 for seniors/students/industry; $8 for children. Special group rates are available. For tickets, go to www.theatreinthemist.org or call 1-877-856-0694. 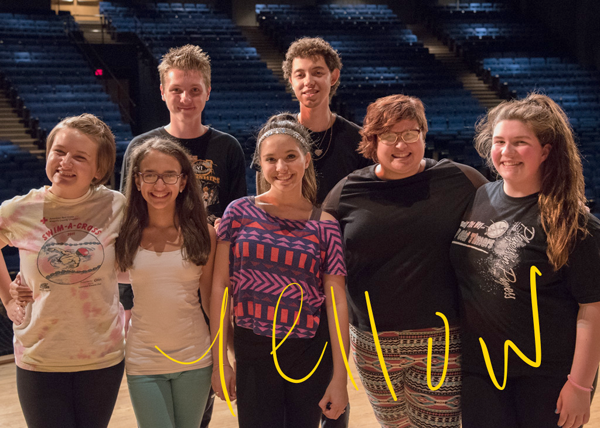