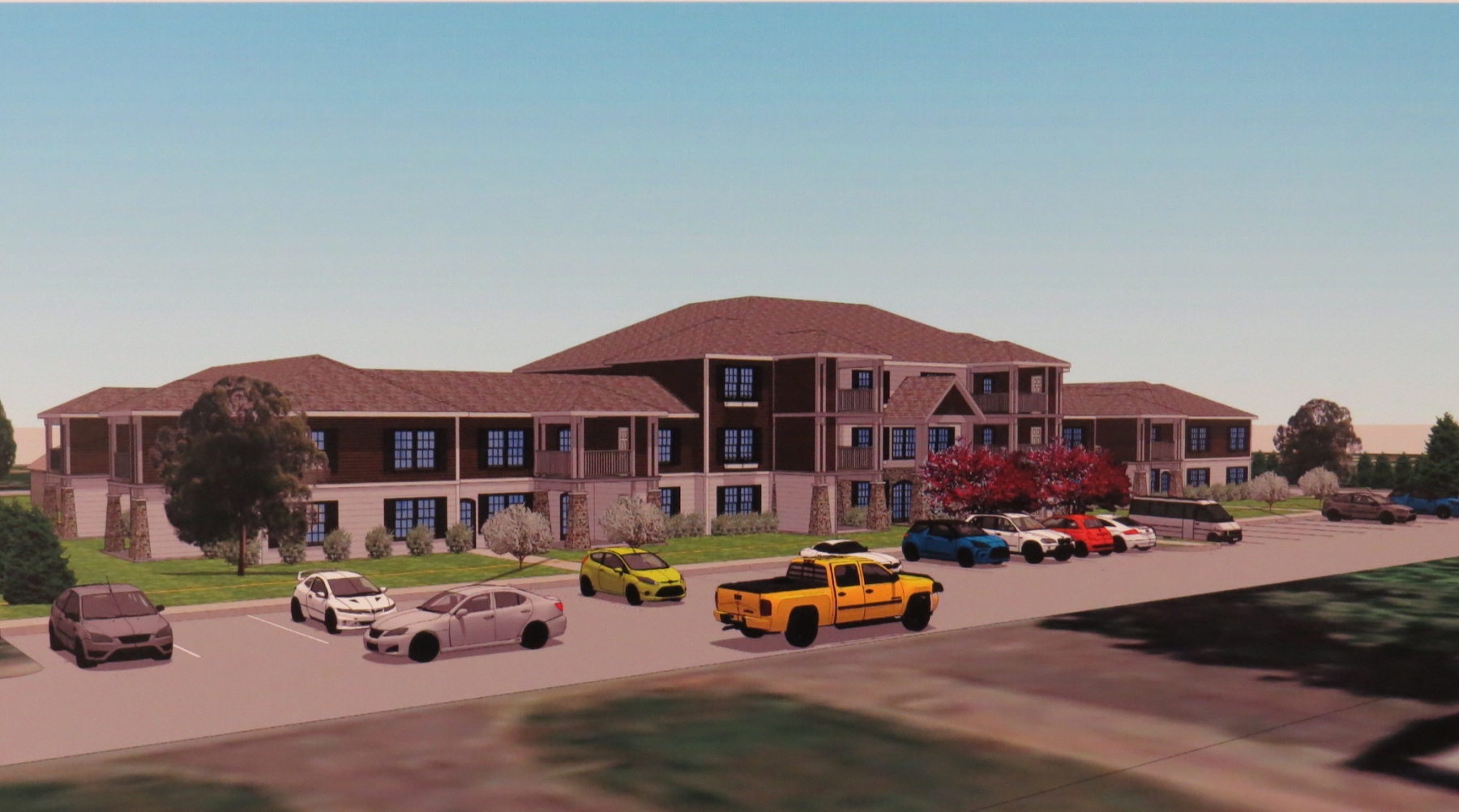 Pictured is Jimmy Jerge's vision for the former Fairchild Manor. This is an artist's rendering of the property at 765 Fairchild Place, as shown from the Onondaga Street side.

Orchard Park developer Jimmy Jerge could've quit while he was ahead. Having received favorable comments in February from the Village of Lewiston Planning Board, he was in the driver's seat with regard to tearing down the former Fairchild Manor nursing home and building rental properties in its place.

But the concept wasn't right, he said Monday, and that's why Jerge returned with a new idea - a plan, he said, that would benefit the Fairchild Place and Onondaga Street neighborhoods.

He still intends to tear the building down, but, whereas the last proposal called for a 36-unit apartment complex, as well as five lots of single-family or duplex units, his current bid is for a 28-unit apartment structure and six patio homes.

"I think there wasn't as much concentration on the density (with the previous design)," Jerge said after the Planning Board meeting. "The density was an issue, because I think we were trying to put too much in the box. It just wasn't going to work."

Engineer R. Christopher Wood of Carmina Wood Morris PC detailed the new concept for the Planning Board and about a dozen residents in attendance.

"What we're proposing on Onondaga Street is a three-story apartment building," he said. "On Fairchild (Place), we're proposing a single-story attached patio home unit building that would be six units. Each of the units would have its own garage and a parking space in front of each garage.

"And then also as part of the project, we're proposing to have 16 garages - two buildings of eight - and those would be dedicated for the multistory apartment building." (All vehicles would enter on Fairchild and exit on Onondaga.)

Moreover, "Onondaga Street, right now, is paved right out to the street," Wood said. "What we're proposing to do is leave that pavement and kind of restripe and reorient the parking, so it's ... better defined - as opposed to just a free-for-all. ... And also for the multistory apartment building on Onondaga, we're proposing a few on-site parking spaces."

At this point, all units are rentals, with seniors the intended inhabitants. Price will be market rate.

"We actually have a lot of thought into this," Jerge said. "We spent a lot of time trying to return Fairchild back into the residential street that the neighbors were asking about. I think we actually put together an attractive apartment building that's something, when we're all done, we're all going to be proud of."

"When we first came up here, we actually were listening to the neighbors and everybody said, 'Hey, I want to turn Fairchild (Place) back to a neighborhood street,' " Jerge explained. "So, the Planning Board and the Village Board has actually assisted us on trying to come up with a plan that we thought would be more beneficial, really, to turning that street back into residences."

"Again, we're here wanting to tell you these are conceptual plans. We've worked hard on them. But if there's something more that you'd like to hear or see, (let us know)," he added.

So how does this project fit into the village code?

"We think we've met the majority of the requirements," Jerge said. "There's a height issue (on the multistory building) that we'll be asking for a variance from the Zoning Board. It's 35 feet is the maximum. We're 40 feet. ... And there's some setback issues on the side lots."

The project is required to have 68 parking spaces. It offers 63 - which includes 26 Onondaga Street spaces situated on municipal right of way.

"The parking, what they call for is two (spaces) per unit, and Chris and I, we work in a lot of different other communities, that's really excessive - especially for seniors that we're trying to target here as my audience," Jerge said.

In lieu of a playground, Wood said the plan calls for an indoor community room inside the multistory building.

Additionally, the land would be 47 percent green and "We're going to try to keep the trees the best we can on Fairchild," Jerge said.

Pending approval, he noted his goal is to demolish the existing building as soon as possible to allow for spring construction. Jerge said the total build should take about nine or 10 months, with the multistory structure constructed first.

"Before we say, 'Yes, we're going to accept your plan as a submission,' those three things have to happen."

Plus, Machelor told residents there would be a formal public hearing before any plan is accepted.

Jerge said, "There's no one racing to start this construction. ... We want to make sure (it's right)."