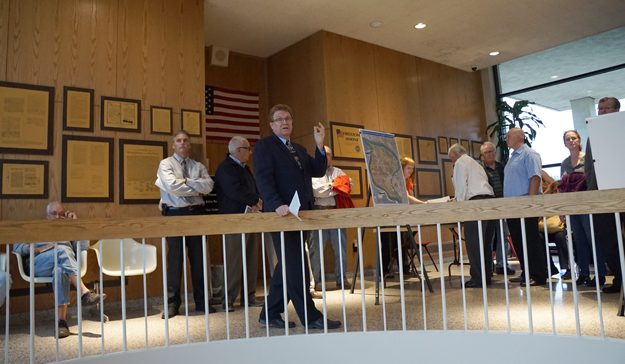 Dozens of residents, mostly from the West River Road area, attended what was intended to be a information-gathering meeting for the proposed West River Greenway connector trail, but which turned into a question-and-answer session. The meeting took place Tuesday in the upstairs lobby of Grand Island Town Hall.

Cooke said the meeting was designed to gather information that would help decide where exactly the path should go. Comment forms were available at the meeting for residents to fill out and return. Cooke said the form is posted online atwww.gigov.com. Comments must be received by Oct. 16.

Thomas called it a "preliminary meeting for the design process of this particular transportation enhancement connector between the northern end of Grand Island along the West River Parkway all the way to the southern end."

About an hour into the gathering it diverted into an impromptu presentation by O'Brien followed by questions from the residents fielded by Thomas.

O'Brien said the proposed trail would stretch approximately 8 miles on park-owned land connecting a stub at Buckhorn Island State Park on the north end to Beaver Island State Park at the south end. The trail would allow for future connection to the town's Nike Base Park on Whitehaven Road. It would link overlooks, access points and parking areas currently along the river. Proposed enhancements would include way-finding signage, improvements to parking areas, and additions of bike racks and benches.

The project's construction budget is $1,875,000 obtained from a Federal Highway Administration grant. Construction could begin in the autumn of 2016 or the spring of 2017.

According to a brochure provided by State Parks, the benefits of the project include:

√ Closing a cap in the Niagara River Greenway Trail to connect Buffalo to Niagara Falls and beyond.

√ Promotion of opportunities for fitness and tourism.

√ Enhancement of public access "along an underutilized segment of the Niagara River shoreline."

√ Linkage of neighborhoods to the river.

√ Usage of nonmotorized modes of transportation.

Thomas described the proposed project as "an important link in our Greenway trail development here in Western New York and Erie County and here on Grand Island. It's an important link to tie bike trails and other recreational assets of this particular Town of Grand Island to the park facilities as well along the entire spine of the West River. It's an important link that's been missing for a long time. When the parkway was built, it didn't have these particular enhancements for nonvehicular access, and we're looking at building those now. We need your input. Tonight's about casting a wide net. It's about getting your specific concerns, your ideas, all of that on paper to us this evening."

He addressed the crowd specifically, most of whom lived on or near West River Road, saying, "Those of you who live across the street from where this is, it's important to us how you feel about this as well. What ideas you have about ways this can be made better, safer, whatever, we want to hear about that, but understand we're moving forward with the design and that's why we're here this evening, to collect your input."

The proposed project didn't sound so preliminary to resident Liz Lutnick, who said she attended a previous meeting on the plan where she said Islanders were told they would have a say in the location of the path.

"It sounds like you're a done deal going along the river, which in my understanding at that original meeting was you approved the concept but not where it would go, and (we) and Grand Islanders would have a choice and some input and say as to what would benefit us as to where it should go," Lutnick said.

"We're still evaluating," Thomas replied, adding, "It will be on park land." Lutnick asked why it had to be on park land, and Thomas said because State Parks applied for the grant.

Other questions from residents concerned:

•Usage. Has the state done an analysis of vehicular and bicycle usage, or lack of it, on the parkway.

•Maintenance. Jim Mazza of West River Road asked who would maintain the path, to which Thomas replied it would be worked out between State Parks and the Department of Transportation, the latter which maintains the area now, much to the disappointment of residents along West River. The meeting took place just hours after the DOT cut the grass along the parkway that residents had not already cut themselves. Mazza said the DOT maintains the road as a highway, not a parkway.

•Access. Thomas said safety for path users is a concern to State Parks and would be addressed with the design. Resident Mike McDonough said a bike path between the parkway and the river would require guardrails. "You're going to have to put a guardrail up in a majority at least of the area because you're just going to be too close to the traffic otherwise, and if that happens I think you create a barrier that excludes more people than it includes," McDonough said, listing duck hunters, fishermen, kayakers, and divers as frequent users of the river that a guardrail would block. "I don't think the tradeoff is worth it."

•Location. Ken Lewis, a retiree from West River Road who worked for State Parks, suggested an alternative of running the path down the center of the median between the parkway and West River Road. "I know they're going to put it somewhere. I know they're going to spend the money. Put it right down the center. You're not bothering anybody. There's no traffic," he said.

•Amenities. A woman who identified herself as a cyclist and daily park user supported the project and asked for access to restrooms that are open all the time along the trail, which she said would be a great asset to the community and a great way to introduce people to the Island. The town lacks a way to get across the Island safely, she said.