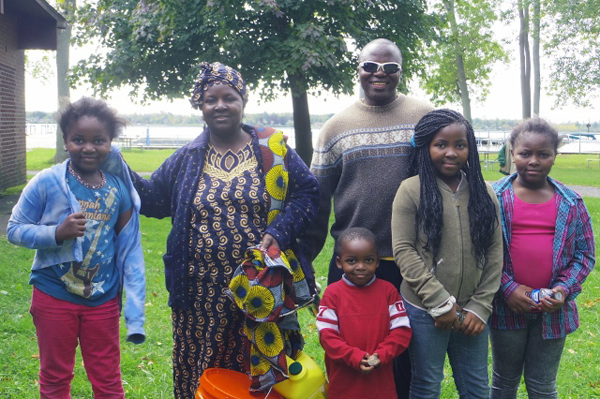 Marie Edonyemya walked down a boat dock and filled a large bucket with water from the Niagara River, with the help of her husband, Byaombe Shabani. In front of a large group at the start of the Oct. 4 CROP walk at Beaver Island State Park, Edonyemya wrapped her head with colorful material, then Byaombe lifted the bucket and placed it on his wife's head.

Edonyemya said that she felt good about walking 3.6 miles with the heavy bucket of water on her head to demonstrate what daily life is like for people in her native Congo.

"I am very excited about doing that. That was the life my people are living today. The jugs (that women carry) are very heavy." 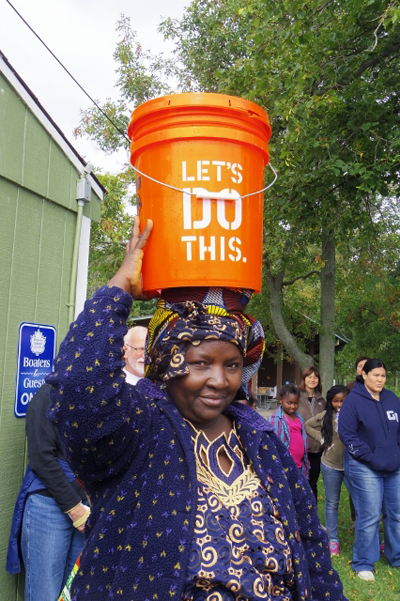 Marie Edonyemya offered a visual demonstration of life in many parts of Africa and Asia, where women regularly walk long distances, carrying the water on their heads that their families need for cooking and drinking. Edonyemya and her husband, Byaombe Shabani, are from the Congo and have lived in Buffalo for six years.

She explained that the water that the women carry on their heads is collected from rivers and is used for drinking and cooking. People go to the river to bathe or wash their clothes.

Edonyemya and Shabani brought four of their seven children with them to the walk: Joy, 11, Debora, 9, Dorcas, 7, and Roger, 3. The family has lived in Buffalo for six years. Shabani works for a company that produces absorbing oxygen.

"I feel very excited to do the walk because that's the life that we lived for years and years. People are walking to help hungry people," Shabani said.

According to Carol Alt, who walks for Riverside-Salem Environmental United Church of Christ/Disciples of Christ, Edonyemya's demonstration was "a really good symbol. Much of the world's population carries jugs on their head to get water."

R.J. Wynne, a volunteer with Boy Scout Troop 630, said that seeing a woman carrying a heavy bucket of water on her head was "a great experience for the boys." It "demonstrated for the boys today the issues facing people around the world, such as access to clean water. To talk about it is one thing. To see it is another." Wynne said that 17 Boy Scouts, between the ages of 12 and 16, participated in the CROP Walk.

Wynne said that participating in the CROP Walk "helps Scouts become more aware of each person's responsibility in the world."

The Boy Scouts are working to earn their citizenship in the world merit badge. To become Eagle Scouts, they have to earn 21 merit badges and complete a service project.

Wynne said that he has participated in the CROP Walk for years and is a member of the planning committee.

"It is nice to get the message out to new walkers. We had a nice turnout on Sunday," Wynne said.

Paul Robinson, who served as acting chair of the CROP Walk, said, "We've had Boy Scouts walk with us before, but this was the first time that an entire Boy Scout troop participated in the CROP Walk." He said that seeing Edonyemya carry water on her head was "new for everyone. It connected us with the people whom we are seeking to help in a way that we've never done before."

Robinson stepped down as chair in 2014 and was replaced by Cathy Rieley-Goddard, who serves as co-pastor of Riverside-Salem United Church of Christ/Disciples of Christ with her husband, Jon Rieley-Goddard. The couple is currently on the El Camino de Santiago (The Way of St. James) pilgrimage, a 500-mile walk that starts in the French Pyrenees and ends in Santiago de Compostela, Spain.

Robinson said that having a large turnout at the CROP Walk is really important, even more important than the fundraising.

"Millions of dollars are needed to combat hunger. The amount of money we raise is a drop in the bucket. We want people's hearts to be touched and moved. We are looking for people to care about their brothers and sisters around the world who are suffering." 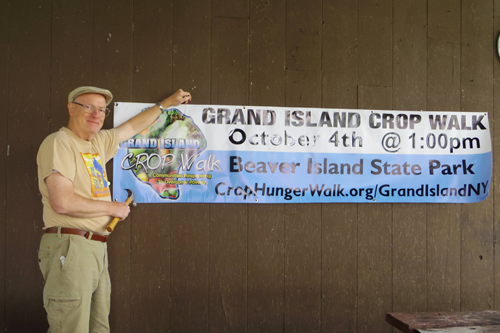 Paul Robinson with the banner. 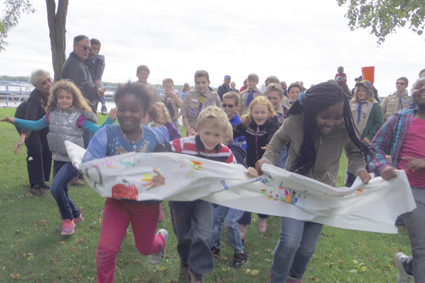 Children break through a paper banner to start the 2015 CROP Walk.