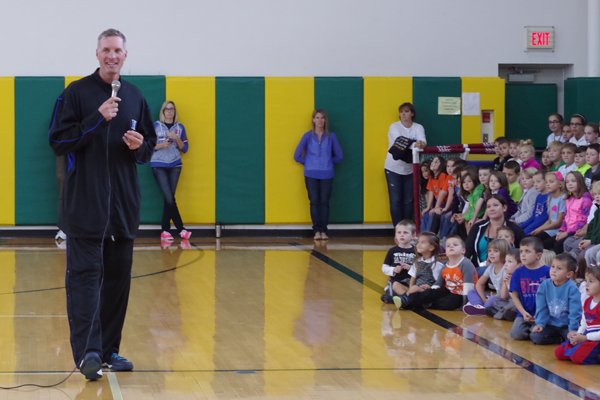 St. Stephen School hosted the Nichols School alumnus for several sold-out basketball clinic sessions for boys, girls and coaches Oct. 2, 3 and 4. Laettner said he loves schools like St. Stephen, calling it "my type of situation, my type of atmosphere. ... This is what I'm from."

Laettner told the students at the school during a Friday afternoon assembly that he grew up 40 minutes south of Buffalo and attended a similar school.

"I went to a school just like St. Stephen's," Laettner told the student assembly. "My school was called Most Precious Blood, and my father was the basketball and baseball coach at the school, and my mother was also a teacher when I was really young at the school."

Laettner said the teaching aspect of his Christian Laettner Basketball Academy appeals to him.

"I love everything about it, and that's why I've been doing my academy for five years," he said. "And I love connecting with schools like this."

The emphasis for the weekend was all basketball, all the time, focusing on fundamentals.

"With the real young kids, I'll be teaching them the most basic things: getting good at catching, passing, dribbling and layups, those four things," Laettner said. "If a young player can get good at those four things, that means they're improving. Then the older kids, we'll work on some higher level stuff."

Laettner could draw coaching influences from some of the best local coaches as well as the giants in the history of the game. He played for his father in grade school, and then played for coach Jim Kramer at the Nichols School before he played at Duke for coach Mike Krzyzewski, winning NCAA basketball championships in 1991 and 1992. He played on the Dream Team at the 1992 Summer Olympics in Barcelona, coached by Chuck Daly.

Laettner had advice for novice players who aspire to play the game at a high level.