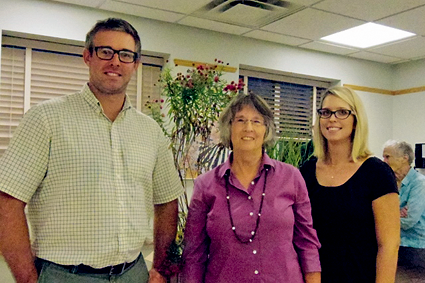 DePriest and Emily Sadowski, natural resource planner for Buffalo-Niagara Riverkeeper, spoke at a Sept. 29 presentation for homeowners on healthy creek beds, held at the Grand Island Memorial Library. It was sponsored by the Grand Island Conservation Advisory Board, with approximately 30 people attending.

The living shoreline is one which features plants that are native to the region. One example of a living shoreline can be found at Town Commons, where a no-mow zone was established near Woods Creek, adjacent to Baseline Road.

"It is really beautiful," DePriest said. "The living shoreline can look clean and does not have to be a mess."

•pH (a term to indicate alkalinity or acidity)

•Conductivity (a poor rating would indicate the presence of inorganic dissolved solids, such as chloride, nitrate, and phosphate ions)

•Turbidity (the amount of suspended material in the water).

Some areas in the watershed, such as the Tonawanda Creek, were "heavily impacted by land use and development," said DePriest. Overdevelopment is not an issue on Grand Island.

"Grand Island is a huge oasis of relatively intact landscape," DePriest said, adding that, "as the Niagara River recovers ecologically, Grand Island will be an important source for plants, wildlife," and other natural resources.

The main problems in Grand Island's creeks were turbidity and conductivity. "The silt and clay bottom of the creeks naturally add turbidity to the water, making the water clarity low," Sadowski said.

According to Sadowski, the cause for conductivity problems has to do with runoff of both fertilizers and storm water. DePriest said that the water tends to degrade when "landowners treat streams as a place to dump yard waste," which includes grass clippings from lawns that have been treated with high-nutrient fertilizers. Also, DePriest pointed out that landscaping companies often dump "huge piles of grass at the water's edge."

"Compost waste upland, not in a stream or a ditch," DePriest said.

The land along the stream is called the "riparian zone." That land can be protected by the addition of a natural transition from the upland property to the shoreline. This includes establishing a no-mow zone near the water's edge, Sadowski said. She explained that, when the grass is grown to the edge of the water, soil erosion is more likely to occur than with a no-mow zone. If native plants, such as tall grasses, perennials, and shrubs, are planted by the water, the deeper root systems of these plants are more likely to reduce the risk of erosion. The natural transition is also beneficial to turtles and frogs, which, at different stages of their lives, need both water and upland habitats.

If there are dead trees or overgrown vegetation in the creek, homeowners have the option of removing these things. "You don't need permits to remove obstructions from the creek," DePriest said.

Removing obstructions in creeks can also help the creeks' fish. According to Sadowski, fish swim into tributaries to spawn, away from the fast-moving river water. "The fish need calmer conditions for their eggs to survive." Buffalo-Niagara Riverkeeper has identified a number of barriers to fish movement. These include culverts that are too high or improperly installed, as well as vegetational barriers. Homeowners can readily remove excessive vegetation.

DePriest said that benefits of a living shoreline includes the minimization of "chemical inputs from upland fertilizers (used on lawns). Shrubs and trees act to cool and shade the water, which "keeps things alive." Plants that could go into a living shoreline include purple coneflowers, whored tickseed, butterfly milkweed, Joe Pye weed, New England Astor, and fall phlox. DePriest pointed out that living shorelines on creek beds also help property values to increase, an added bonus for homeowners.

There are things that homeowners can do immediately to create a living shoreline.

"Stop mowing to the shoreline. Give the native vegetation room to grow," DePriest said. He added people can plant basket willows and shrub willows along the creek.

"This can be done with cuttings. Just install branches, approximately two feet in length, in the ground. The technical term for that is 'willow live and stake.'"

The homeowner should allow the living shoreline as much space as possible. DePriest suggested at least 30 to 40 feet, although at least 100 feet would for a no-mow zone would be preferable. Another technique for improving creek health would be to place large rocks and logs in the water strategically to divert water flow. Large boulders can be used to secure creek banks.

Neighbors and other groups can work together on planting native species.

He suggested that homeowners, especially those who see a living shoreline as "messy," find a new way to see messiness. DePriest quoted Henry David Thoreau, who said, "Wildness is the preservation of the world."

"If you are used to having a well-manicured lawn, challenge yourself to start viewing our stream corridors as something beautiful. Have an open mind. Let a little wildness into your yard by the creek," DePriest said. 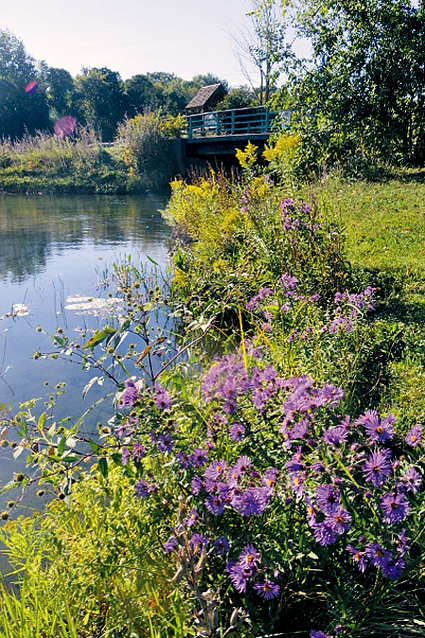 A living shoreline like this one as seen along the marsh in Buckhorn Island State Park can improve water quality on Grand Island.