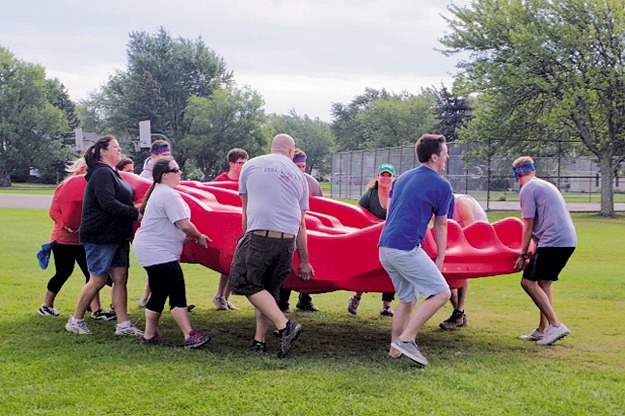 Kaegebein gets its new playground

Kim Cich, who founded the Kaegebein Playground Committee, surveyed the approximately 50 volunteers who were building the new playground on Sept. 19 and said, "I am very grateful. For generations to come, this playground will be enjoyed by many in the community. I also feel very blessed by the community coming together."

After the playground equipment was delivered, David Brand, chair of the Kaegebein Playground Committee, said that he was hoping for 30 volunteers to help construct the playground on each of three days: Sept. 18, 19 and 20. About the unexpectedly large turnout of volunteers on Sept. 19, Brand said, "It's an absolute joy and excitement and an absolute sense of community." Because of the large turnout of volunteers, the project was completed in two days, instead of the expected three days.

Cich said that, 13 years ago, replacing the dilapidated playground at Kaegebein Elementary School was "a vision and a dream." She said that, five years ago, she went to then-town Supervisor Peter McMahon with a petition asking for a new playground, as the old one was "in desperate need of being replaced.

"Due to budgetary reasons, the town was unable to help. So then, I reached out to the Huth Road (Elementary School) playground committee to learn more about fundraising and how they accomplished what they did with their playground."

Cich said that she spoke with Kaegebein Principal Mary Haggerty about forming a committee. A few years later, however, Cich moved to Amherst. "I had to walk away" from chairing the committee), although she continued to assist as much as she could. "(The playground) never left my heart." She said that she was very happy to be part of the construction of the playground. Cich, the mother of two sons, David, age 19, and Gavin, age 10, said, "This teaches kids about perseverance. Never give up your hope or your faith that this could happen." Gavin, a fifth-grader at Kaegebein, said that the new playground "means that you never give up on your dreams. They can happen someday."

Jody Chadima said that her children are the same age as Cich's children. "My oldest, June Ann, is now 19," Chadima said. "When she was in third grade, in 2005, she started a petition. She went around her street and got parents to sign a petition for a new playground. How could I not be part of this? My daughter tried to start it on her own. The playground equipment was delivered on her 19th birthday. She came home from Keuka College to be a part of it."

Chadima's younger daughter, Juliet, is a fourth-grader at Kaegebein. "She will be able to play on that playground."

Cyndi Booker, a second-grade teacher at Kaegebein, said, "What a great turnout. How lucky are we to have a dedicated group from the community and the school to create an opportunity for the kids to have some physical activity. This helps to foster cooperation and teamwork. I am so excited to see so many different people here."

A teacher at Kaegebein for more than 27 years, Booker said that she was looking forward to taking her students during school hours to the playground and to taking her grandchildren there on weekends.

Max Pikula, who teaches fifth grade special education, said, "I am excited. It's about time."

Dick Crawford, the town's deputy highway superintendent and a Kaegebein alumnus, said, "I've been on the committee almost from the start. It's a great addition for all of the kids of Grand Island to have a school and a community playground. Hats off to the kids, parents, the PTA and all of the community volunteers for rallying together to raise money and, most importantly, for installing the playground for the children to enjoy."

Haggerty said, "I am so excited. I cried on Thursday when we dedicated the playground. It's a wonderful demonstration of how Grand Island appreciates and provides for its children. This is a lovely, positive result of hard work and dedication." 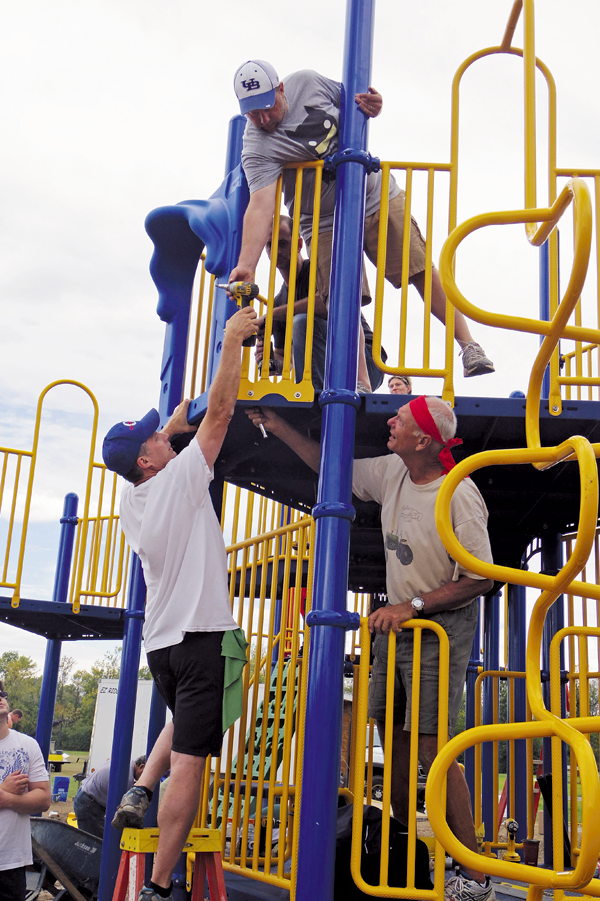 Volunteers worked to create a new playground for the children at Kaegebein Elementary School. (Photos by Alice E. Gerard)