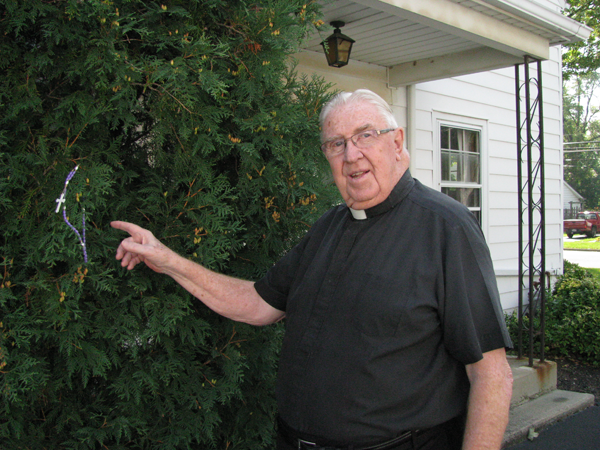 Monsignor J. Thomas Moran is shown at his residence in Youngstown pointing out the rosary on the bush outside his home. It's an old tradition to pray this way for good weather for an event.

While some local Catholics are making the trek to join the crowds at one of the cities where Pope Francis will be speaking this week, many are making plans to attend a smaller, homier event.

While the pope is meeting officials and saying Mass in Philadelphia on Sunday afternoon, the 35th annual Rosary Crusade for World Peace will be underway at Our Lady of Fatima Shrine in the Town of Lewiston. The crusade is scheduled from 2:30 to 4 p.m., and a special apostolic blessing on behalf of the pope is expected to be part of the ceremony.

Monsignor J. Thomas Moran, now pastor of St. Bernard's Church in Youngstown, began the Rosary Crusade after he was appointed pastor of Our Lady of the Rosary Church in Niagara Falls in the late 1970s. The prayer event used to be held in the city's former Lackey Plaza. When that site was no longer an option, he moved the crusade to the shrine. Moran is an affiliate of the Barnabite Fathers there.

Moran explained one of the main purposes of the crusade is "to inspire greater devotion to our Blessed Mother."

At age 83, Moran is still leading the crusade as moderator and plans to be back again next year. If not, he believes, "in some way or another, it will continue," because the crusade has developed a faithful following of people of all ages.

The crusade's chairperson, Dolores Laurrie, of Holy Family of Jesus, Mary and Joseph parish in Niagara Falls, credited Moran's dedication and devotion for keeping the crusade going all these years.

He even looks after the weather. A rosary was already hanging on a bush outside his residence last weekend. Moran, who grew up in Lockport, remembers Italian families putting rosaries on their bushes as they prayed for good weather for events like wedding receptions, which, in those days, were usually held outside.

Since much of the Rosary Crusade is outside on the shrine grounds at 1023 Swann Road, Moran decided it wouldn't hurt to adopt the custom.

The crusade, sponsored by the Niagara Council of Catholic Women of the Diocese of Buffalo, starts with an outdoor rosary procession. Complimentary rosaries will be distributed to all who attend. Four decades of the rosary will be recited outside while local children strew rose petals on the path, before the procession moves inside the basilica for the fifth decade and the crowning of the statue of Mary, Laurrie said.

The Rev. Jeffrey Nowak, parochial vicar at St. Vincent de Paul parish (a combination of Prince of Peace Church in Niagara Falls and St. Leo's in Town of Niagara) will be the homilist. Also expected to participate are Niagara University students, Niagara University ROTC, Knights of Columbus Council 14622 and the St. Peter R.C. School Bell Choir. A blessing of children and benediction of the Blessed Sacrament also are part of the event to which everyone is invited.

The Breier family from Divine Mercy Parish in Niagara Falls was asked to participate in the crowning this year. The Grand Island residents include parents Nicole and Bill Breier and their children: Emma, 8; Madison, 6; Landen, 3; and Chase, 1. 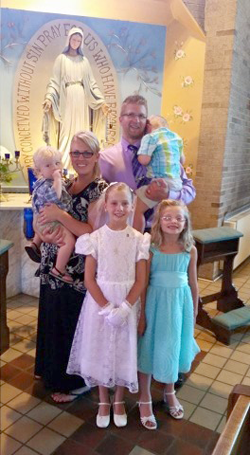 Last year, Nicole said, she was asked to bring her group of Little Flowers from Divine Mercy (girls ages 5 to 15) to toss the rose petals. This year, her daughters, or at least Emma, will do the actual crowning. The family frequently visits the shrine, which, like its counterpart in Fatima, Portugal, is dedicated to Our Lady of Fatima, who appeared in 1917 to three Portuguese children. One of the requests she made to the children was that people say the rosary for peace.

"We have a pretty strong devotion to the Blessed Mother," Nicole Breier said. "We try to say the rosary every night as a family."

The prayers work. Nicole stopped at Our Lady of La Leche in St. Augustine, Florida, on a recent family vacation to say some prayers to be a "good mom." At the time, she didn't know she was pregnant. Her past two pregnancies caused severe morning sickness. The new little Breier, due at Christmastime, is not causing any problems, she said.

Meanwhile, Moran is following national news on the pope's visit. Pope Francis and his predecessor, Pope Benedict, are the only two popes Moran hasn't had a private audience with or seen in person since he went to Rome to complete four years of theological studies at the North American College, followed by ordination in 1957. His appointment in 1964 as secretary to Bishop Pius A. Benincasa of Buffalo brought more papal contact and he has returned to Rome on a number of occasions over the years.

However, he wasn't tempted to head out with others seeking to catch a glimpse of Pope Francis on his U.S. visit. With the crowds and all the added post-9/11 security, it would be way too much walking for him, he said.

Besides, he has a crusade to attend.