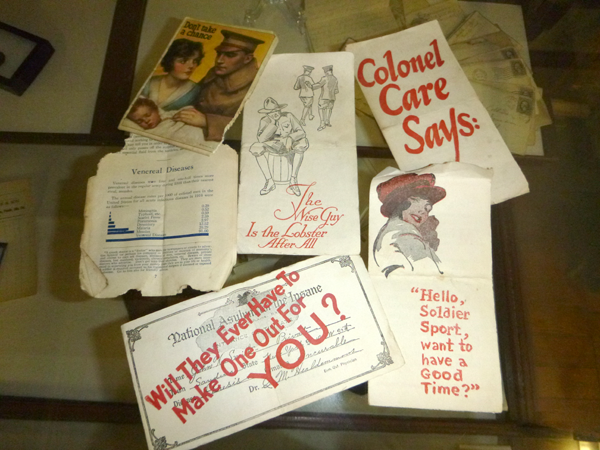 The Cambria Historical Museum recently underwent an extensive renovation, thanks in part to town historian Brooke Morse and deputy town historian Gail Reinbird. The museum, located in the former town hall, features exhibits on many aspects of local history. (Photos by Jill Keppeler)

Pieces of the Past: Cambria Historical Museum

For those focusing on local history in the Town of Cambria, there's an awful lot of ground (and years) to cover.

"This was the town hall at one time, this building," said Gail Reinbird, deputy town historian and vice president of the historical society, giving a recent tour around the museum. "The Town of Cambria was established in 1808. We are the original township in Niagara County. We actually are in the dead center of the county."

The historical museum is located on Lower Mountain Road, at the corner of Cambria Wilson Road. It opened in 1974, several years after the formation of the historical society, and recently underwent a renovation at the hands of town historian Brooke Morse, Reinbird and others.

Morse said the society had been down to just "a handful of people keeping it going," and had been stagnant for a few years. A Cambria native, she is the granddaughter of Vernett Genter, the town's first historian.

"She pushed for the town to get a town historian and she was the one who pushed for a historical society too, and put that together in the '70s," Morse said. "Cambria was definitely her thing." 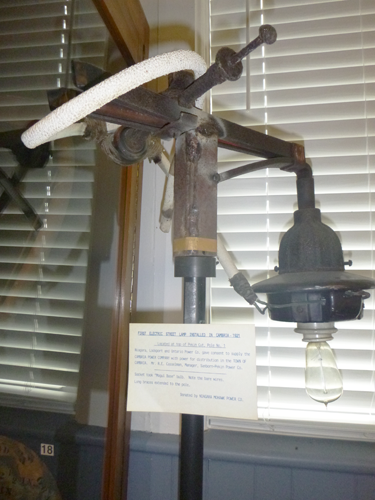 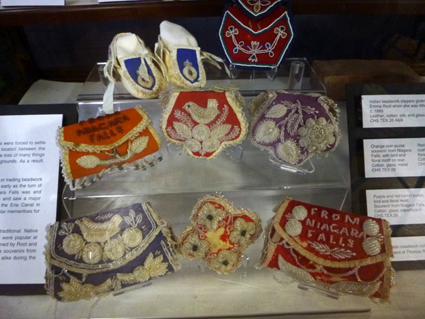 Today, the museum is organized into a variety of exhibits dealing with many different aspects of the town and its history. A pioneer display showcases hand-carved dolls and a board from the log cabin that is probably the oldest house in the county, Reinbird said.

"A lot of those early, early families, they're still around," she said.

Another display showcases the history of nearby Camp Windy Meadows, and with it, the Girl Scouts, with Scout sheet music, books and uniforms and photos of the site (which still welcomes Scouts each year). Nearby stands the first electric street lamp in Cambria, from 1920, and a farm implements display that Reinbird said is popular with visiting schoolchildren.

"It's kind of fun," she said. "The kids will come in and you'll have them guess what these things were used for. They come up with the wildest things."

Other displays deal with churches and community organizations, such as fire departments, and local wineries. Yet another case holds a variety of smaller displays, such as examples of intricate Tuscarora beadwork; information on Jonathan R. Bass of Cambria, who toured with sideshows during the 1880s as "The Living Ossified Man;" and a display on Lafler's General Store, which was located on North Ridge Road.

One of Reinbird's favorites is "If Walls Could Talk," a collection of items found within the walls of older Cambria homes. It includes letters, trinkets, a chipped-but-still-smiling old Pinocchio doll ... and pamphlets on venereal disease from the World War I era, aimed at soldiers.

A flirtatious woman winks from the cover of one, above the words, "Hello, Soldier Sport, want to have a good time?" Another bears the legend "The Wise Guy is the Lobster After All" (which no one has been able to quite figure out). Yet another contains advice such as: "Don't try to be a rabbit when God intended you to be a man" and "How could you look the flag in the face if you were dirty with gonorrhea?" 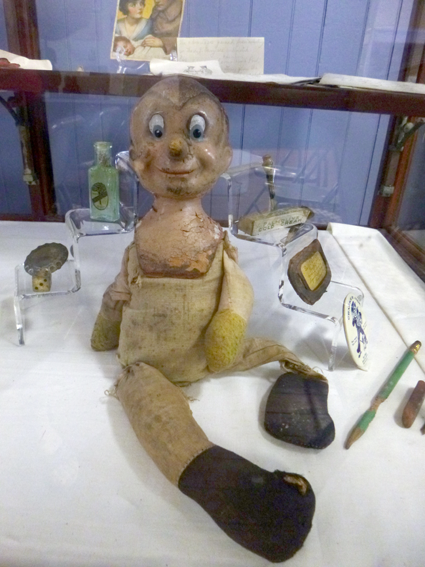 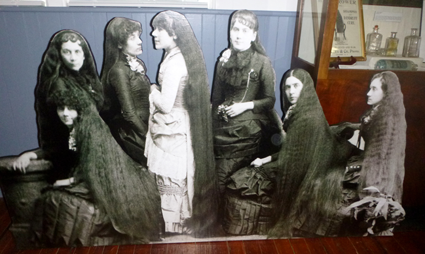 Six of Cambria's most famous residents, the Sutherland sisters, also have their display, including a large cutout of the siblings, hair tonic bottles, photos and a trunk belonging to Isabella Sutherland Castlemaine. Sarah, Victoria, Isabella, Grace, Naomi, Mary and Dora were born in Cambria between 1846 and 1864.

The siblings started performing as musicians, but audiences were more interested in their hair ... a collective 37 feet, or so legend holds. Their performances - and long locks - made them international celebrities.

"Their father, being an entrepreneurial sort, came up with this hair tonic ... and made a lot of money," Reinbird said. The sisters build an extravagant mansion in Cambria, but it burned down years ago ... and the siblings, for the most part, died in poverty.

A display pays homage to local abolitionists Martha and Thomas Root, whose former home in Pekin is where Reinbird now resides. Thomas Root, who lived from 1817 to 1903, was a former town supervisor, deacon and justice of the peace for 40 years.

Reinbird described how a plugged sink in the "rambling farm house" led to the discovery of a hidden room and from there, the home's identity as a likely stop on the Underground Railroad.

She has corresponded with the Roots' great granddaughter, Helen Schieffer, gaining information on how Thomas Root worked with Lyman A. Spaulding of Lockport to arrange for the men, woman and children who'd escaped slavery to make it to the border crossing and over into St. Catharines, Ontario, and freedom.

"They had a compatriot at the bridge. We don't know who that was," she said.

Another exhibit showcases Nathan Ziba Peterson, a native of Cambria who was killed in action at age 22 at the Battle of Cold Harbor in Virginia.

"We had this little tintype (photo)," Reinbird said, pointing it out in the case. "It'd hung around for years and years. No one knew who this guy was. Then someone donated a book. His photo was in the book."

The case also includes a violin and bow that belonged to Peterson and an 1853 copy of "Twelve Years a Slave" owned by Peterson's father.

Morse will give a talk about Peterson and his history during the annual Heritage Days celebration planned for Sept. 26 at the museum. The event, which will take place from 11 a.m. to 4 p.m., will also include music, food, craft demonstrations and a bake sale.

Morse said museums such as Cambria's are invaluable to their communities.

"From what I've seen over the years, the most important value is for people rediscovering where their families came from, where their people came from," she said. "These little historical museums and town historical societies have resources you aren't going to find online.

"There's nothing better than going to where your ancestors lived and discovering it for yourself. It gives a whole new meaning to discovering your past." 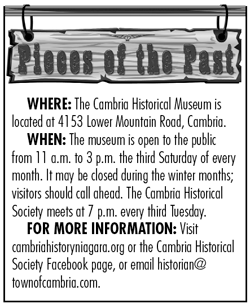 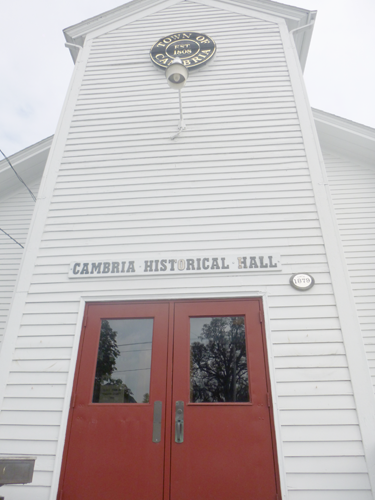