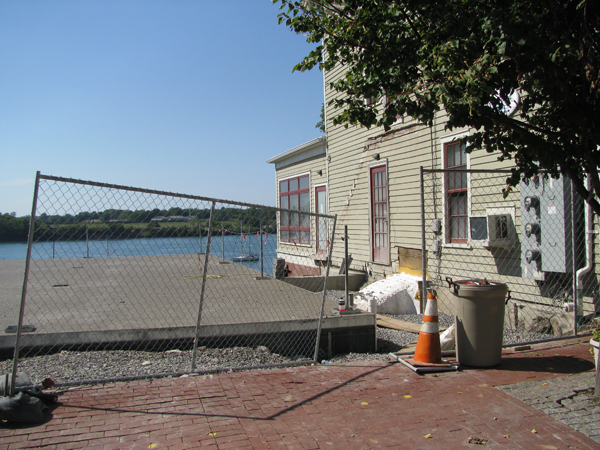 Anyone driving through Youngstown's Main Street business section recently has seen construction fences and vehicles on the river side of the street.

The project at The Riverview building, owned by Rick Lohr and Sue MacNaughton, is bigger than it looks.

Emergency construction was needed on the parking lot after the past two winters made the rear riverbank deteriorate.

"The parking lot was about 50 years old. It broke loose due to the extremely cold temperatures in February and had to be dug out," Lohr said.

"We wanted to get something positive out of a bad situation," MacNaughton said, so they decided to add room to the fitness center in order to provide services people have been requesting, such as massage therapy and a Pilates program.

Eventually, the space under the parking lot deck also will include a small apartment facing the river, Lohr said.

Another part of the project is the addition of a standby power system at the bottom of the hill near Water Street. Power outages can be a frequent problem in the village, especially in the winter. This project will provide power, when necessary, for the three adjoining buildings, including The Riverview, that face the Niagara River.

Meanwhile, the fully enclosed fitness center remains in operation during construction. Pat Lindsay is the popular co-manager. The up-to-date fitness equipment faces a wall of windows overlooking the beautiful Niagara River. Those using the equipment now also can watch through the windows the construction and landscaping being done in the rear of the parking lot. Big doors on the far inside wall of the fitness area block any interference from the construction under the lot.

"All of the work is being performed by local contractors, including Bob MacVie, Mike Costello and Gerald Thomason," Lohr said.

The facelift at The Riverview also has prompted MacNaughton, who previously operated The Dory store on Main Street, to rejoin the Niagara River Region Chamber of Commerce. 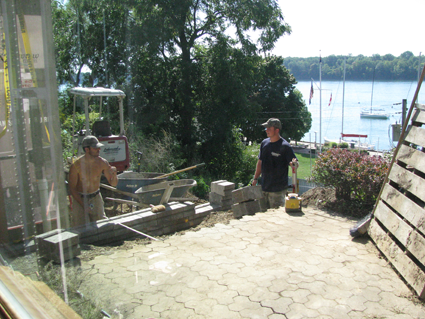 Work is continuing on the new parking lot next to The Riverview building on Main Street in Youngstown. It can't be seen from the street, but under the raised parking lot deck will be an addition to the fitness center. Those using exercise equipment inside Riverview Fitness still enjoy a view of activity on the Niagara River from the wall of windows. This week, they could also watch work being done by Lakewood Landscaping at the rear of the parking lot construction.

Shown are Matthew Costello of Youngstown and Mitch Daggett of Lewiston. (Photos by Susan Mikula Campbell)