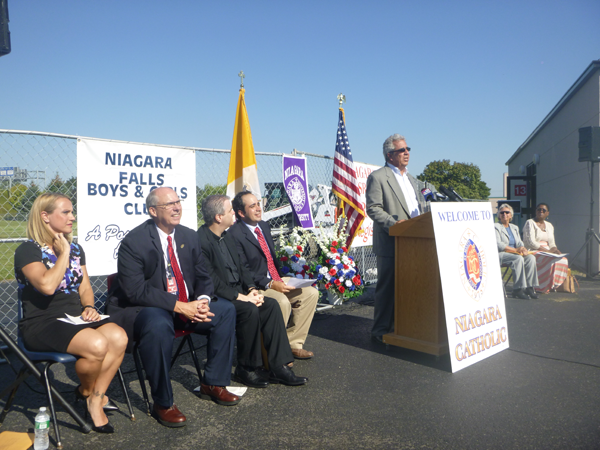 Gary Hall, president and CEO of Waste Technology Services of Lewiston and president of The Niagara board of trustees, speaks Thursday at the groundbreaking ceremony for The Niagara community center behind Niagara Catholic Junior-Senior High School in Niagara Falls.

When he was a child, Gary Hall spent a lot of time playing with his friends at parks, schools and other facilities in Niagara Falls, taking advantage of the Boys & Girls Club on 17th Street and other programs. But there wasn't a dedicated recreation site for them to attend.

"There wasn't really a place for us back then," said Hall, president and CEO of Waste Technology Services of Lewiston, who was born and raised in Niagara Falls.

Hall wanted to change that.

On Thursday, one of Hall's dreams came to fruition, as ground was broken for The Niagara community center behind Niagara Catholic Junior-Senior High School on 66th Street in Niagara Falls. 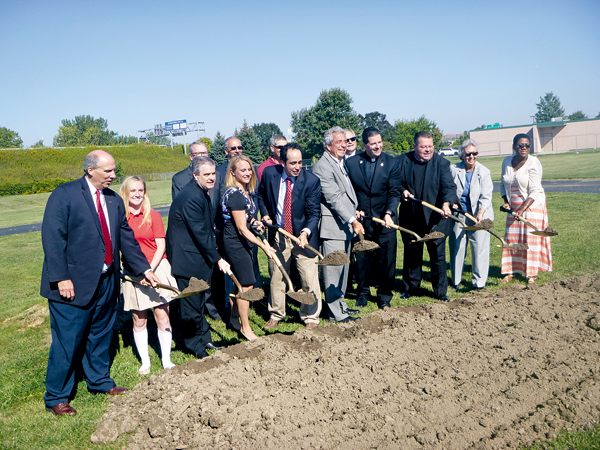 The center, described as a 20,000-square-foot multi-use athletic and recreation facility for the community, not just the school, will cost a projected $2 million and be completed by next summer. It's a project of the Niagara Partner Network, which is composed of Niagara Catholic, the Niagara Falls Boys & Girls Club and Niagara University. The facility will have indoor and outdoor space for sports such as soccer, tennis, basketball, volleyball and lacrosse, as well as cheerleading, and classroom and community space for arts and education.

At the groundbreaking event, various local dignitaries lauded Hall and the partnership members as Niagara Catholic students watched during a brief reprieve from classes.

Ronald Buggs, president and principal of the school, thanked Hall, who serves as the president of The Niagara board of trustees.

"Your vision, determination and support will have a positive impact on the youth of Niagara Falls and the Niagara region for many, many years to come," he said, also recognizing the other members of the partnership. "The collaboration and the support that we provide this project, and each other, has been and will continue to be profound, especially for the younger people that we serve."

Sister Carol Cimino, superintendent of schools for the Diocese of Buffalo, said the facility will be a symbol of solidarity with the city and a "new age of hospitality" as the community is invited to the facility.

"As the City of Niagara Falls grows, so will Niagara Catholic High School," she said. "... I'm so proud to be here at a school that has pride in its past and faith in its future."

The Rev. James Maher, president of Niagara University, noted that Hall was once one of the young people for whom the center was intended "a few years ago," he joked.

"He was a young person who visited the Boys Club of Niagara Falls and benefited from mentoring, from sport, from learning and from the relationships that were formed," Maher said. "And so to the young people here today -- what Mr. Hall is trying to do is create that future for you. ... So take advantage of the opportunity that's been placed before you, and claim your future."

Hall himself called the road to the center "an unbelievable journey." He credited a number of businesses that have helped bring the project to this point, including Cannon Design, Buffalo Geothermal Heating and Cooling and others.

"This has been a dream of mine from many, many years," he said. "I can't wait until we're able to open the doors and allow the children of our community to come in and really enjoy the things that we're trying to accomplish." 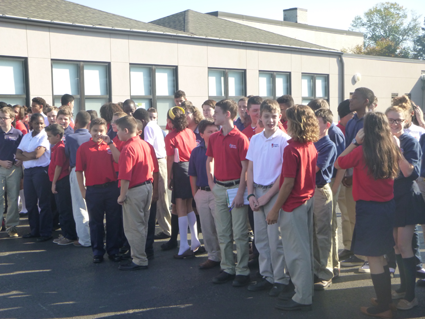 Students watched the various dignitaries gather to throw a ceremonial first shovel of dirt. Marissa Campbell, a senior from Niagara Falls who is the Niagara Catholic student council president, got to help take that official first step.

"I love Niagara Catholic so much, and this is going make me love it even more," she said of the center. "I have a younger sister and younger brother here, so even after I leave, I'm going to be able to come back and enjoy it. It makes me want to be even more involved as an alumna."

A pair of younger students just couldn't wait to try out the athletic facilities.

"I'm just ready to get on the soccer field," said Joseph Phillips, a ninth-grader from Niagara Falls.

"I just want to play basketball," he said.

A few years back, Hall proposed to build a $2 million recreation center for the Village of Lewiston, but after an outcry from residents who didn't approve of the sites proposed for the project, he pulled the idea.

Hall said he didn't want to upset the residents who objected to the center.

"It didn't work out then. But you never know what could happen in the future," he said, looking at the future site of The Niagara. "This could be the first of many." 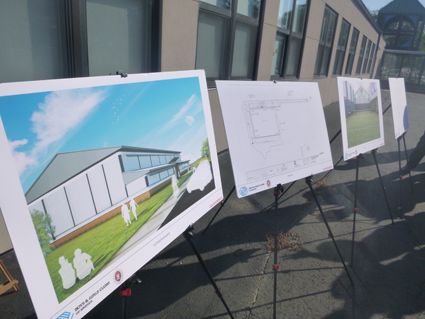 Plans and artist rendering are shown for The Niagara community center.