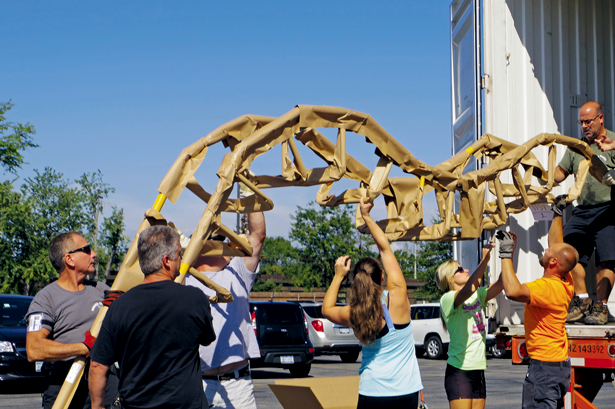 Volunteers unload pieces of equipment for the new playground at Kaegebein Elementary School on Sept. 11. (Photos by Alice E. Gerard)

•Taken from the Sept. 18 Island Dispatch

Approximately 20 volunteers unloaded numerous pieces of equipment from a large trailer Sept. 11 at Kaegebein Elementary School in the final stages of a long effort to upgrade the school's playground.

Plans are to build the playground today, Saturday, and Sunday. Work begins at 8 a.m. today and Saturday and at noon Sunday. David Brand, chair of the Kaegebein Playground Committee, said 30 individuals are needed each day to complete the task. Volunteers are invited to stay and help for as long as they are able, whether it be for 15 minutes or for an entire day. 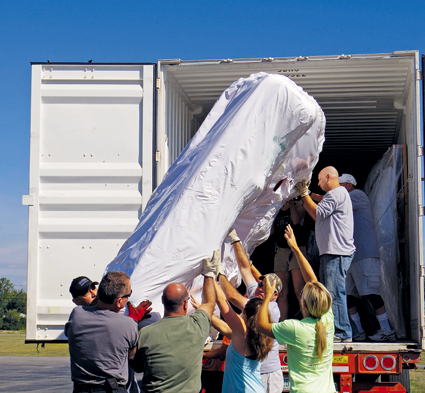 "We can put volunteers to good use on Friday, Saturday and Sunday," said Mary Haggerty, principal of Kaegebein Elementary School. "We're very grateful to the community."

"Every hand can be used," Brand added. He said jobs for volunteers range from "counting bolts to moving big pieces."

Brand said that one of the boosts to fundraising was a deal made by Kaegebein PTA president Cyndy Montana with the PTA. "That was a real shot in the arm."

According to Montana, the PTA donated $7,000 to the project after deciding that a new playground was "very important for kids."

"This donation gave the project momentum. We finished (the fundraising) in the last six months with donations from the public and with tons of work by volunteers,"

Another donation that meant a lot to the committee came from a Kaegebein student, who donated her birthday money for the playground. "She is an amazing little girl," Brand said.

Montana, who has a daughter and a son attending Kaegebein, said, "Now we are going to have a playground that we can be proud of. It creates a positive environment, and it gives our children an outlet."

Haggerty said, "I'm just so excited. This has been my vision since I came to the school in the 2009-10 school year: Students would have a new safe playground. I am so proud of the staff for helping out. It is typical of this community to come together to make it a great place for kids. We're very grateful to the community."

Brand said that the playground project is important to him because, when his children were small, "I drove by Kaegebein to take the kids to playgrounds at Huth Road and at Sidway."

Montana said that the former playground at the school was "old, dilapidated, and broken down. It was a hangout for teenagers who weren't necessarily doing positive things."

"This is the area that needs a playground the most," Brand said.

Haggerty said that many people have helped make the dream of a new playground into a reality. These include parents and community members, as well as teachers, custodians and aides. Montana said that people who had key roles in making the playground a reality include Brand, Jillian Woods, Katie Dunnigan and Jodie Chadima. "They worked very hard," Montana said.

Montana, who is originally from Canada, said, "Grand Island is my forever home. I want to help the community and make it the best it can be."

Brand said that Grand Island is a "great community" with a big heart. "That's why I love Grand Island. I've lived on the Island for 44 years."

Brand noted the Brick Oven is donating pizza for the volunteers Saturday and Sunday. The committee will provide fruit, coffee and doughnuts in the morning. 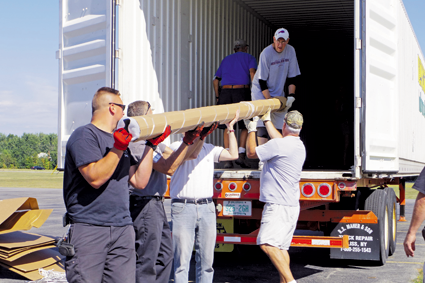