In drawings submitted Thursday to the Village of Lewiston, portions of Ellicott Development's proposed plaza have changed significantly. The northern building, No. 3, is now a two-story unit. The third floor is gone and, instead of 26 apartment units spread over two floors, the sketch calls for 13 two-bedroom dwellings on the second floor.

The Village of Lewiston Planning Board invites residents to comment on Ellicott Development's proposal to build a plaza on the north side of Center Street. A public hearing will be held at 6:30 p.m. Monday inside the Red Brick Municipal Building gymnasium, 145 N. Fourth St.

The five-member commission met Aug. 10 to review the plan and didn't intend to receive public comment. Still, residents made their opinions known, as they voiced disapproval of Ellicott's intent to erect three buildings (including the now-two-story drugstore/apartment complex and a fast food restaurant with a drive-thru) on Center Street and 4.1 acres of mainly forestland.

Planning Board Chairman Norm Machelor promised residents they would have a future time to talk.

"We're going to listen, and we're going to allow the public to ask questions (on Monday)," he said this week.

Machelor said he expected three amenities not present Aug. 10: a microphone, a projector screen to show audience members current proposal sketches, and Ellicott CEO William Paladino, who couldn't attend the previous meeting. This is his plan.

"We're going to get more comments than we got before; we're going to have it in a more structured way," Machelor said.

The chairman said he hoped to have the plans in hand before Thursday.

"I don't see there's any way that we can accept the first submission on the 14th without the stormwater plan being finished. ... It's going to be a purely informational meeting," Machelor said. 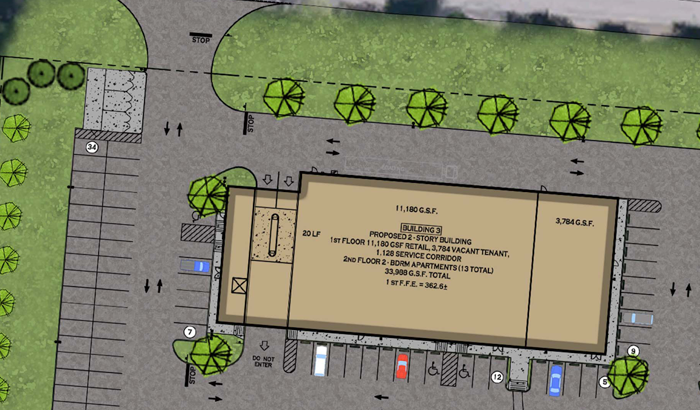 A portion of the latest rendering.