•Taken from the Sept. 11 Island Dispatch

Gus Macker himself was pleased with Grand Island's first hosting of the Gus Macker 3-on-3 Tournament.

Scott "Gus" McNeal, who founded the eponymous 3-on-3 basketball tournament in his parent's Lowell, Michigan, driveway in 1974, gave plaudits to the event that took place Aug. 28 and 29 on Grand Island, as well as to the event's organizer.

"We had a great time helping manage the Grand Island Gus Macker Tournament," said the event's founder this week. "I thought the first Grand Island event went well. I'm hoping that the local community residents were happy with our first visit."

McNeal came to the Island in May for a press conference when event promoter Corey McGowan announced the tournament, which had taken place in Buffalo and Darien Lake in previous local editions over 23 years. The games moved to Grand Island Boulevard on the Island between Whitehaven and Baseline roads and drew more than 282 teams in 23 age divisions. McNeal said in May it was "a goal of Gus Macker to find a long-term solution for a tournament in the Buffalo area, and Grand Island should be a great fit."

He came to the Island again for the tourney, which drew more than 1,000 players and many more spectators.

"The initial goal was to show how our event fits in a small-town atmosphere. We are proud of the family festival feel that makes our current event
successful," McNeal told the Dispatch. "I think your community helped out with volunteering, especially the high school students, which was a big help with Corey McGowan's team." 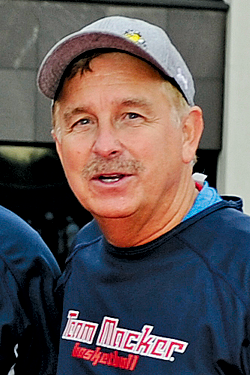 McNeal praised the organizer, who jumped in to take over the tourney when no other local organizer was willing or able to tackle the job. McGowan has conducted such productions as the Taste of Grand Island, which will return Oct. 3.

"Corey did a fine job with his first Gus Macker event. Our system usually takes much longer to become accustomed to - he only had five months to organize this project," McNeal said. "I love his enthusiasm and experience with the event business and his passion for Grand Island."

The Grand Island Town Board will meet in a work session to hold a review of the Gus Macker event at 9 a.m. Tuesday, Sept. 15, in Town Hall.