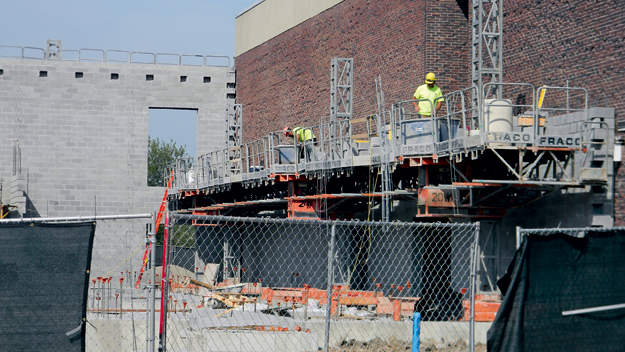 A look at the new fitness center under construction on the west end of Lewiston-Porter High School. (Photos by Terry Duffy)

Auer: Lew-Port will be ready

"Is it finished? Absolutely not.

"Is it ready to have kids come through the buildings? We're really close to that. We have to. We don't have a choice."

So explained Lewiston Porter Principal Andrew Auer Friday morning about the status of Lewiston-Porter High School. The complex is in the midst of a nearly $26 million district capital improvement project and, with school ready to begin on Sept. 9, rumors have been floating throughout the district that Lewiston-Porter would not be ready to handle the masses come Wednesday.

During an impromptu tour, Auer explained that, while disruption does exist, the high school will, indeed, be functioning. 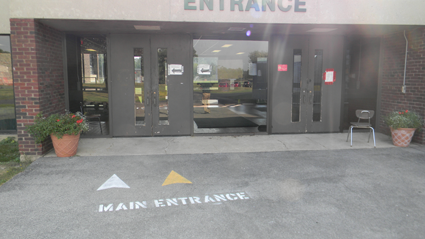 Students will enter via the former gym entrance into the hallway separating the high school and gym/new fitness center areas under construction, with what Auer described as an egress or emergency exit to be located adjacent to the high school office.

The former entrance to the high school, located near the auditorium, is now blocked off and fenced, a situation Auer said would continue for some time.

"The front entrance is expected to be blocked off through construction, probably through December," he said.

In the meantime, Lewiston will be up and functioning.

"Our crews will be working through the weekend to get all the wires tucked up and tied up (and ceilings up)," Auer said. "The floors will be cleaned, it's going to be ready."

Auer said the 400 wing near the high school's auditorium, where art, technology, chorus and music are found, will be operating as usual. The auditorium will likewise still be open. "The auditorium is still in play; they're not scheduled to do the auditorium until February, March.

Auer said the gym, while torn up, would likewise still be functioning. "We'll still have the ability to use the gym. The upstairs of the gym is being remodeled now; the old locker rooms are all torn apart, so we have alternative places for kids to change."

"Phys-ed teachers have adjusted the curriculum, to make sure that we are not going to put kids in a position where they're going to need to (do additional changes for classes)," he said.

As far as any competitions in the gym complex between Lew-Port and other schools, Auer likewise said they would continue, despite the construction.

"At this point, the plan is to absolutely continue having those events (volleyball, basketball, etc.)," he said, adding the bleachers would still be used for the time being. "Right now, the plan is for this to remain open."

But for the pool, it's "totally out, there is no pool," Auer said. Lew-Port students will go to Niagara University for swim classes and team meets. 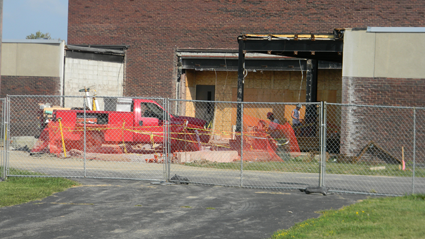 The former high school entrance, near the auditorium is blocked off.

Lew-Port football will use the field house as before, with locker rooms in the complex being used for alternative changing areas for students as needed.

"We have two alternate areas for them to use for changing, showers, etc.," Auer said.

Auer reiterated that, despite rumors students could be facing the prospect of classroom trailers, Lew-Port will be ready come Wednesday.

"Our classrooms have been adjusted, we're not going to need to do any of that," he said, adding "There are many areas of the high school that are not even affected."

And Auer said the high school cafeteria would be up and operating as usual.

"Come Wednesday at lunchtime, kids will be there, we'll be ready to go," he said. 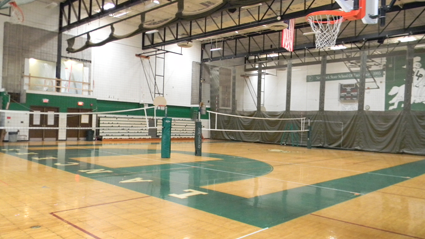 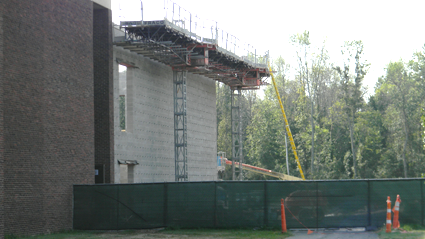 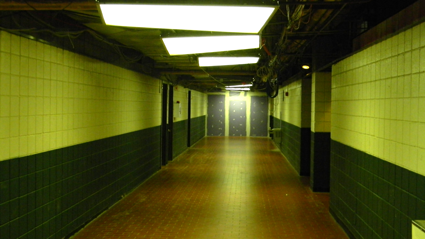