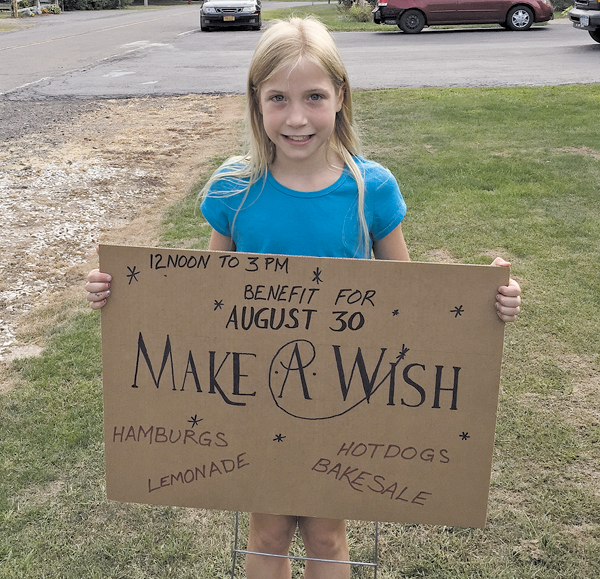 Samantha Tierney, shown, and her grandmother, Cheryl Reed of the Town of Niagara, raised nearly $1,000 Sunday for the Make-A-Wish Radio-Thon. (Contributed photo.)

Cheryl Reed of the Town of Niagara wanted to teach her 8-year-old granddaughter about helping others.

As it turns out, that wish came true in a big way.

On Sunday, a fundraiser for Make-A-Wish at her Rhode Island Avenue home brought in $943, Reed said. The money will be donated to the 21st annual Make-A-Wish Radio-Thon, which will take place Sept. 17 and 18.

"It was a good time. It was a great cause," Reed said. "We just had an unbelievable day.

"I can't believe it. I never thought we would raise that much."

Reed and her granddaughter, Samantha Tierney, sold lemonade, crafts, baked goods and candles to light for $1 ... so people could then blow them out and make a wish. They planned the event for about a year.

Reed and Tierney still hope to hit $1,000 in donations. They have until Sept. 16 to do so. They intend to make the fundraiser an annual event, benefiting a different charity every year.

"I'm trying to teach her how to help people out," Reed said of her granddaughter. "She was excited. I don't think she expected to raise that much, either. It was an experience for her.

"She's a great kid, and I'm trying to teach her to do good, to help other people."

Samantha, 8, is a student at Colonial Village Elementary School in the Niagara-Wheatfield School District. She said she enjoyed the experience.

"We were selling stuff for people who are sick and they have a wish granted for wherever they want to go," she explained. "There's a lot I liked about doing it."

The 97 Rock Make-A-Wish Radio-Thon has been taking place in Western New York for 21 years. Last year's event raised more than $250,000.

Make-A-Wish Western New York grants more than 150 wishes a year to children who have been diagnosed with life-threatening medical conditions and who live in the 17 counties surrounding the Buffalo and Rochester areas. For more information, visit wny.wish.org.

Samantha Tierney, shown, and her grandmother, Cheryl Reed of the Town of Niagara, raised nearly $1,000 Sunday for the Make-A-Wish Radio-Thon. (Contributed photo.)