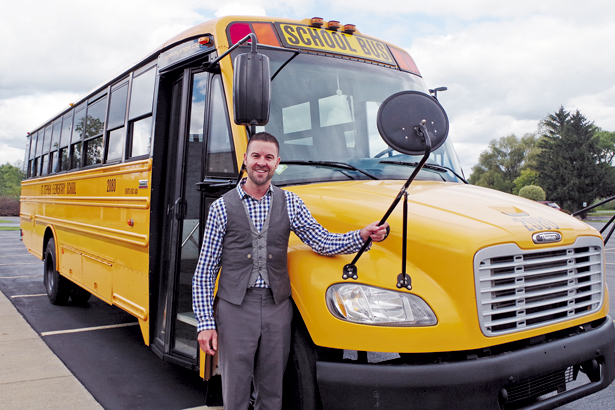 St. Stephen School Principal Scott Gruenauer and the St. Stephen R.C. Church parish will introduce their first school bus for the school at a ceremony today. (Photo by Larry Austin)

St. Stephen School will debut its first school bus, which officials say will allow the school to enhance both curriculum and enrollment.

The school at 2080 Baseline Road will hold a ceremony about 1 p.m. today to introduce a 60-seat school bus meant to transport students from Niagara Falls. Families from Niagara Falls will be on hand to see the new bus, and the Rev. Paul Nogaro of St. Stephen R.C. Church will perform a blessing.

St. Stephen School Principal Scott Gruenauer said the bus was bought used from a company in Dansville and delivered Wednesday. This is the first bus the school has ever bought, he said, adding he is unaware of any Catholic elementary schools in the area that have their own bus.

"I've been working on it about two years," Gruenauer said of buying a bus for the school. "It took that long to get everybody on board with me. It was a long process. It was a battle."

The parish paid for the bus, at a cost of just under $20,000, through fundraising by the Home School Association at St. Stephen School.

"We have just so many dedicated volunteers that put in so much time. That's exactly why we're able to do it," Gruenauer said.

St. Stephen School relies on the Grand Island Central School District to transport Island students to the Baseline Road campus, but the state mandate that compels the public school district to transport students to private schools within a 25-mile range doesn't apply to city school districts, Gruenauer said. Even though from Niagara Falls to Baseline Road is about five miles, Cataract City students who wanted to attend St. Stephen had to find their own transportation. This year, they can hop on board the St. Stephen express.

"It's been huge for that because I have probably six or seven students already this year that are only with the bus. That's the only way they could get here, which essentially at $3,000 apiece, seven kids, that pays for the bus in one year," Gruenauer said.

He said the parish could have bought a smaller bus, but the bigger bus will come in handy for field trips, as well, now that the school has implemented a STREAM program, an acronym for science, technology, religion, engineering, arts and math.

"And (it) being a 60-passenger, I can take two to three grades, so it's going to get a lot of use for sure," Gruenauer said. "It's really going to enhance our STREAM program, field trips and busing for the Falls families."

Gruenauer has a driver ready to go, but both he and others at the school plan on getting their commercial driver's licenses as well.

The bus will extend the practical reach of the school's recruitment possibilities, thereby enhancing enrollment.

One pickup point for Niagara Falls families might be at St. John de LaSalle Parish on Buffalo Avenue, where some of these families reside. The bus will serve as a mobile recruiter for St. Stephen.

"They have a preschool, but they don't have anything above that," Gruenauer said of the school at St. John de LaSalle. "So they'll see this bus rolling in and out of there every single day."

St. Stephen School is nearly at its enrollment capacity, Gruenauer said, and the bus will help ensure the school stays that way.

"This will be a lifeline to keep us where we need to be," Gruenauer said.

Buying the bus was up in the air until a month ago, he said.

Economics and state laws limited the school's options when trying to address its transportation needs. Paying $40,000 a year to lease a bus for one pickup and drop-off point was too expensive, and state laws and insurance regulations prevented the school from buying a stretch van for $30,000.

"It took a while to find one in this condition," he said. It looks brand new, and plans are to paint it a different color than standard-issue yellow. Because the bus isn't picking up passengers on the street, but instead transporting to and from designated points, the school can change the color from yellow.

St. Stephen is in the vanguard when it comes to addressing its transportation problems. Because buying a bus for a school like St. Stephen is rare, information on how to do it was scant, Gruenauer said.

"There are a lot of people asking me how I did it, and now they want to do it," he said.