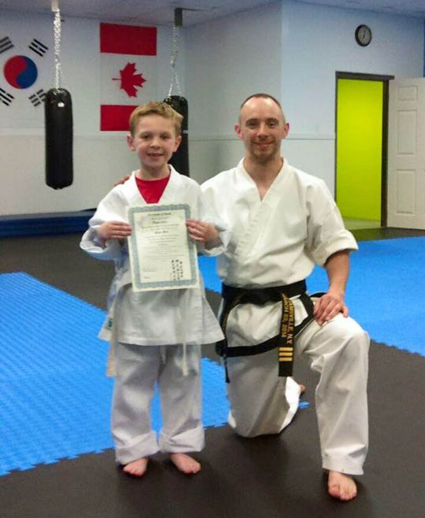 For David Prenatt, martial arts gave him everything.

Now, he wants to give back.

Prenatt is the owner of Nitro Martial Arts, which is now open at 2720 Niagara Falls Blvd. in Wheatfield, in the same building as Project Future WNY. It's the next step in a life that's been involved in the martial arts for about 19 years, first in taekwondo (in which he now is a third-degree black belt) and expanding to Shotokan karate and more.

"I pretty much owe everything to martial arts. It's given me everything," Prenatt said. "Twenty-nine years old is kind of a crossroads. What do I want to do with the rest of my life?

"Martial arts kept me on a straight and narrow path. I feel that's something I can contribute and give back to the local community here."

Prenatt, who has trained with masters Gorino and Khechen in the Buffalo area, met his wife, Jacquie (now a first-degree black belt who works with younger kids at the studio) through martial arts. They have a 2-year-old daughter and a 10-month-old son.

Prenatt had worked with the Rev. Bob Heisner, director of Project Future WNY, over the years and is also interested in the community aspect of martial arts.

Heisner said Prenatt is "a tremendous asset" and that his skills are "off the charts."

"He's excellent with teaching children, especially young children, and that is something I wanted to shore up as I get older," he said.

Prenatt started doing renovations on the location in January, with a soft opening in April and a grand opening celebration and open house planned for Oct. 3.

Nitro Martial Arts works with students as young as 3 or 4 years old as part of the Tiny Tigers program, up to 6- to 13-year-old juniors and the adult program for those 14 and older.

Prenatt also provides the chance to compete in sport karate (he takes part in 24 tournaments a year), kickboxing and self-defense classes and Fuel Fitness, which he described as "modified Crossfit" with traditional martial arts.

Heisner, who has run Project Future for about 25 years, said Prenatt's studio fits well with his organization.

Project Future WNY was formed to be "a community outreach organization that would impact our community and primarily work with youth, young people," he said.

"That's how we got the name, Project Future. ... How in the world do you have a future without reaching and equipping young people?"

"It's space we already had ... we wanted to fill it with somebody who's dedicated like him," Heisner said of Prenatt.