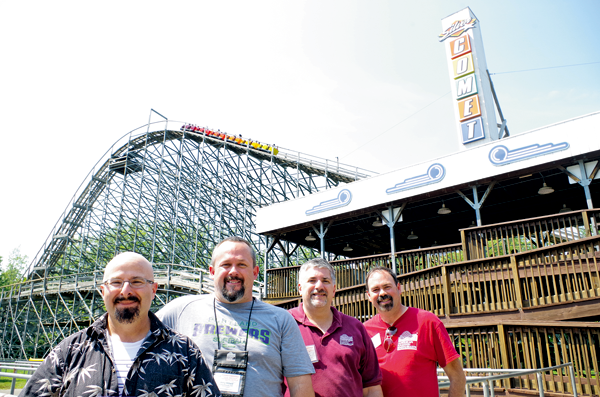 •Taken from the Aug. 21 Island Dispatch

The Grand Island amusement park hosted a national conference of members of the American Coaster Enthusiasts, known as ACE, who gave high marks to the park and to its wooden roller coaster, the Silver Comet.

Dozens of ACE members made Martin's Fantasy Island the third stop on a three-day tour of Upstate New York parks and roller coasters. ACE members started their weekend conference at Darien Lake Friday, traveled to Sea Breeze in Rochester Saturday to ride the 95-year-old Jack Rabbit wooden coaster, and concluded at Martin's Fantasy Island Sunday. At each stop, the ACE members enjoyed exclusive ride time on the coasters and took in seminars and question and answer discussions with park representatives and industry experts.

"We're just geeky enough to get off on that kind of stuff," said ACE executive committee member Tim Baldwin.

ACE Vice President David Lipnicky said ACE holds more than 60 events a year across America where they learn about park history, rides and future park plans. Their trips provide them a glimpse of the industry the general public doesn't see. It was Lipnicky's first time visiting Martin's Fantasy Island and riding the Silver Comet.

"But I'm gonna come back," said Lipnicky, a Texan. "I love the woody out here. It is a really great run. The scenery, the landscaping, and then just the natural beauty of the place is really great."

And if anyone knows roller coasters, it's the members of ACE. Lipnicky stopped counting the number of roller coasters he's ridden in his life when he passed 650 about 15 years ago. The ACE members even packed Max's Doggy Coaster, the kids roller coaster named after the grandson of Fantasy Island owner Martin DiPietro. One ACE member from the United Kingdom has ridden 2,500 coaster said Baldwin, who has ridden 1,000 himself. He called the Silver Comet "a classic twister. You're always turning left, turning right, sudden drops. And they've really put a lot of care into it."

"I think they hit your senses more than the other ones because you really feel the rumble of a wooden coaster, where you might not on a smooth steel track," Baldwin said. "You have that vibration. They sometimes have their own smell, the sights, the sound. I like a wooden coaster." 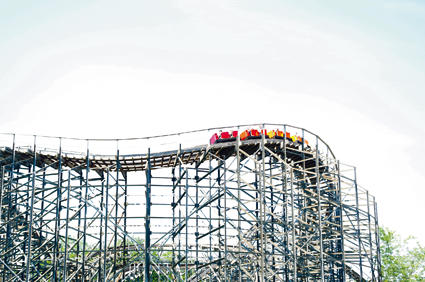 Lipnicky called a wooden coaster "almost like a living organism because the wood will expand and contract with changes in temperature and humidity. So a wooden coaster might be running really slow in the morning, but by nighttime it could be absolutely flying."

The Silver Comet is "very, very smooth," said Steve Berto of California, who has ridden 750 coasters, the first at Coney Island when he was 10. "Especially for a twister of its age. This park really takes care of its coaster."

To ACE members, the success of the Silver Comet is more than just its steel and wood, but the blood, sweat and tears the family-owned park puts into its main attraction.

"We love the big chains, but it's really a neat change of pace to go to a great family park that the locals love," Lipnicky said.

"Their heart is in it," Baldwin said.

DiPietro said his park has hosted groups like ACE for conferences many times before and he appreciates their support and their acknowledgement.

"It makes us feel good. There's a lot of big corporations that have millions and millions of dollars to spend on their roller coasters," DiPietro said, but he noted his family-oriented park has a coaster rated among the top 50 coasters in the country. Roller coasters make parks, he said.