Unbeknownst to them at the time, one company appears to have gone a step further in mitigating shoreline and boat damage.

On Wednesday, Whirlpool Jet Boat Tours President John Kinney said his boats are now slowly navigating the waters in front of the south docks. His Water Street business drew the biggest complaints at Monday's Village Board meeting, which disappointed him, he said, because "our boats troll out of both the Lewiston and Queenston docks, and don't power-up until they are to the south end of the village limits."

South Water Street residents Harry and Suzanne Buckholtz led the charge Monday, rounding up neighbors who agreed with their assertion WJBT boats need to slow down when passing residential docks.

"We would like a wake mitigation going through the Lewiston area - the dockage - and to reduce the risks of safety issues," Suzanne Buckholtz said. "It's difficult to get on your boat when these (jet) boats are going by - and to even sit on it."

She and her husband own and operate 10 docks right next door to WJBT'S Lewiston launch site.

"Our docks - they've been there a long time (since 1972), but it seems this year that the jet boats have become much more aggressive in their passing through the village," Harry Buckholtz said. "I've had to put in two docks this year that have gotten busted up, because the boats that I have there go back and forth and break the docks.

"They've been there 39 years, so they aren't exactly poorly built. They're just getting busted up. Also, I've had to put in (an) extensive amount of bulkhead repairs - probably about $10,000 worth - just to keep the water from going in and eroding all our property underneath the docks. We don't want to have collapses there.

"It's an expensive thing for a very small business. It really can be mitigated by just simply having a little more respect for the village people who have frontage there and docks."

Harry Buckholtz said jet boats - both WJBT and those from Niagara Jet Adventures in Youngstown - leave "very large and destructive" wake a few minutes after passing by. He said reducing the speed limit to 5 mph would "greatly reduce" wake impact, and suggested such a modification for the area between The Silo Restaurant and Artpark.

"All we're trying to do is provide a nice environment," Suzanne Buckholtz said.

Steve and Rebecca Kassay of North Water Street said it's quite difficult to even board a personal boat once a jet boat has passed.

"Even one of these jet boats that is traveling three-quarters of the way across the river from my house, when that wake gets to my place, it's extremely powerful," he said. "The boat (rocks) - up and down three feet - and if you're trying to get on it or off it, you just can't do it. And it destroys the lines going to the boat. And the shoreline is suffering."

"I tried to get onto my boat last year, and I fell between the boat and the dock," she said. "The wake - it came out of nowhere. It was a really dangerous situation."

South Second Street resident Brian Zachary said, "Yesterday (Sunday), we were getting off my boat. And the situation turned dangerous just because it was throwing us so much - and these were the boats that had gone on the far side of the river."

"The boat was tossing and really throwing people around," he added. "And we kind of had to sit and wait. And then trying to pull into the dock space was almost impossible to do."

He said boaters used to have get-togethers and go fishing. Now they struggle to even board their vessels.

"You have to do something about it, because it's destroying the harmony of the water and the way we live down there, stay down there," he said. "We used to enjoy it. We used to have a lot of fun down there. And now we can't even ... relax."

"It's getting out of hand," Thomas added. "This has been going on for many years."

Linda and Joe Impellitier of Perry Court begrudgingly left the Buckholtz docks, they said, because of wake damage.

"I retired in 2008 and immediately moved to Lewiston - the community of our dreams," he said. "We've been here seven years. We've been waiting for a slip in Lewiston for that long. We finally got one this year. ... We didn't know anything about the jet boat wakes.

"We finally got a slip and, six weeks later, I have so much damage to my boat, I just got in it today. I moved it to Wilson - back to the old slip we were at. ... It's just so tattered from these waves." 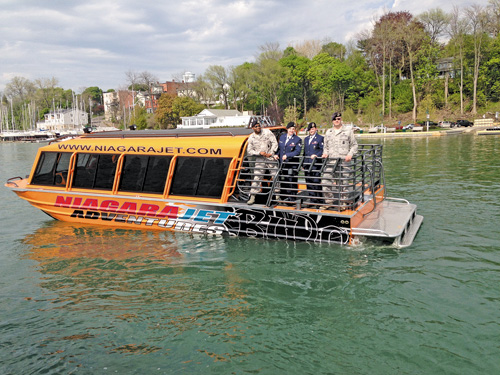 Aaron Dey of Niagara Jet Adventures was in attendance Monday.

"The reason we're here is we want to listen to what some of the concerns are," he said. "We're only a small operation compared to the other guys. ... We have worked it out with Smuggler's Cove. We slow down for them, because it's a floating dock. We've worked it out with fishermen. ... We want to find a way to do the same thing here."

"I'll be happy to go by your property - by your dock - and see what actually happens there," Dey added. "And then whatever we need to do to address it. We've slowed down before, so we can find a way to do it, too."

He noted tour operators are under a time crunch to move people in and out, but "We'll talk. ... We'll figure a way to fix it, so you guys don't have to worry about (our) group."

Kinney was accused of ignoring waterfront residents, but he said his decision to delay his boats from fully powering up was the result of a conversation with Harper and Tryon drives occupant Tom Franklin.

"For the last two weeks, our trips that depart out of Queenston and Lewiston do not operate on plane anywhere north of the Buckholtz property," he said. "Suzanne hasn't even noticed that we changed our operations, and it was based upon my negotiations with Mr. Franklin."

"All of the Whirlpool jet boats operating out of Lewiston and Queenston do not operate on plane in the Lewiston waterfront," he said. "The boats out of Niagara on-the-Lake continue to pass by on plane. Yes, they do. But all of the vessels out of Queenston and Lewiston troll out of our dock - just south of the Buckholtz property - before they power it up."

Franklin said his issue is with jet boats twirling in front of his dock. He said it doesn't make sense for the boats to head north before sharply turning south toward the Niagara rapids.

"When they leave Queenston and Lewiston ... they come down here and they do their whirl," he said. "That gives two more trips by our place from both Lewiston and Queenston. They do the whirl about a quarter of a mile downriver from our house."

Franklin said he's lost 10 feet of bank in the past decade and had an elderly neighbor with a floating dock who, after being thrown over the boat, opted to sell the vessel.

Kinney visited Franklin's property. The homeowner asked if the jet boats could just head south instead of first looping north.

WJBT tested this route on a recent weekend.

"The difference was unbelievable," Franklin said. "Instead of getting hit with every boat twice in a matter of minutes ... those two days it really was a noticeable difference. I had our neighbors over here, and we could see the difference on those two days."

"He's been decent in coming," Franklin said of Kinney, whom he called "a gentleman."

"He's come down right on my dock, and he's looked at the erosion there," Franklin said. "And he has slowed them down, which did make a difference."

Franklin said the boats have resumed circling in front of his property.

He, too, said a lower speed limit "would be the best scenario."

On Thursday morning, the Sentinel spent more than 90 minutes watching WJBT boats launch and return without speeding up in front of the Buckholtz docks. Two slip holders, however, said that demonstration was just for show and wouldn't last into the weekend.

Village of Lewiston Mayor Terry Collesano said Youngstown enacted a speed limit for jet boats and his municipality would look into doing the same thing (though trustees speculated such a decision ultimately would come from New York state).

"We will work in your behalf," he added. "We'll see what we can do - if anything - and we'll follow through."