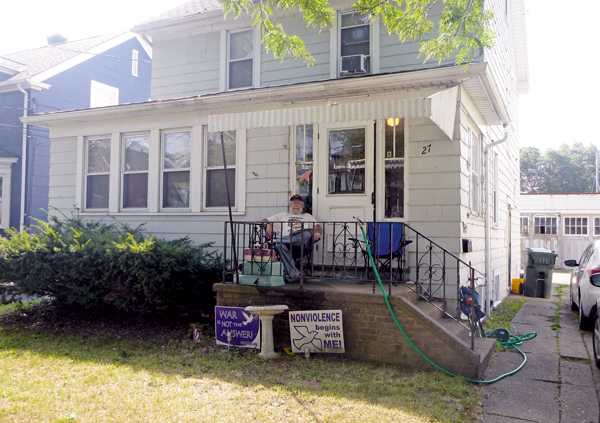 Michael O'Connor sits on the porch at his home on Chipman Place in North Tonawanda. O'Connor's home was selected to be painted as part of Project H.O.P.E. by Jesse Gooch of Wheatfield, owner of Painters Plus. (Photo by Jill Keppeler.)

Michael O'Connor is a survivor.

A host of medical difficulties, many brought on by his service in the U.S. Army in Vietnam, and years as a single father have taken their toll, though, and that makes it tough to keep his home in North Tonawanda spruced up.

And that's where Jesse Gooch of Wheatfield, owner of Painters Plus, comes in.

O'Connor's home at 27 Chipman Place in North Tonawanda has been selected for the fifth annual Project H.O.P.E., in which an area home is selected from submitted entries to be pressure-washed, primed and painted by Gooch, the Painters Plus crew and other volunteers.

The project, which will take place at 9 a.m. Aug. 22 this year, was started by Gooch in 2011. He recalled driving through the city and seeing homes that had peeling paint, and wanted to find a way to help those who didn't have the resources to paint or hire help.

"We've been in business 15 years here, the location we're in," he said. "Our customers have been loyal to us. We've really expanded. I just wanted to think of a way to give back."

The criteria for "Helping Others Paint Exteriors" are that the homeowner involved must be disabled, elderly, suffering financial hardships, or a disabled veteran, Gooch said. O'Connor was selected from three finalists from a variety of entries.

"Vietnam veterans have historically not been well-received in America," he said. "I'm grateful."

Sitting on the porch of his home recently, O'Connor spoke with pride of the his service in the 27th Infantry Regiment, nicknamed the Wolfhounds, and his son, Brendan, who just graduated from SUNY Fredonia.

O'Connor, who has degrees from Canisius College and the University at Buffalo, went into the Army and to Vietnam as part of the ROTC right out of college, serving 1969 to 1970, he said.

However, that service changed his life forever. After returning from the war, O'Connor worked in hospital administration in the area, including at Children's Hospital, lived for a time in Germany, then became a rehabilitation counselor.

He remarried and had a son, but his wife died of cancer when Brendan was just 13 months old, and O'Connor dedicated his time and resources to raising him.

Today, he said, he's 100 percent disabled — a cancer survivor himself, dealing with the effects of Agent Orange exposure in Vietnam, PTSD and a host of other issues such as arthritis, ulcerative colitis and the aftereffects of a stroke.

"I'm probably going to cry when the people come," he said, noting how impressed he is that Gooch's project has been going on for five years.

"That's not just a feel-good thing," he said. "That's a commitment to your community."

Among the volunteers Saturday will be Mayor Arthur Pappas and other North Tonawanda officials. Pappas lauded Gooch and his team for their volunteer efforts.

"This is a great project that helps not only the homeowner, but the entire neighborhood," Pappas said in a statement.

Volunteers should be at O'Connor's home by 9 a.m. Saturday. The paint for the project will be provided by Sherwin Williams of Meadow Drive in North Tonawanda. Good Guys Pizza will donate food and beverages for the volunteers.