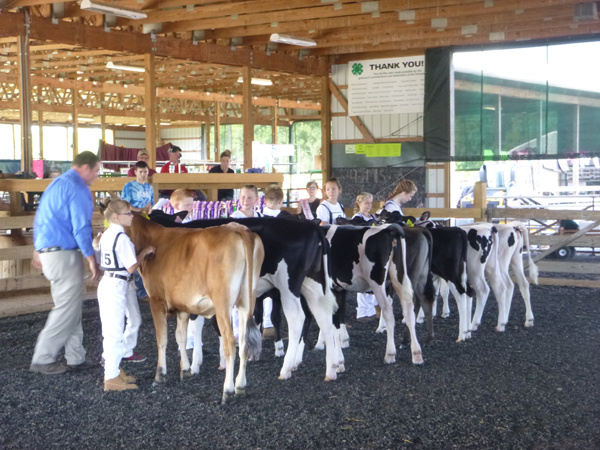 Competitors in the beginner dairy cattle showmanship division line up at the event Friday at the Niagara County Fair.

It was a calm, sunny morning Friday at the Niagara County Fairgrounds - except in the Coliseum, where a flurry of activity was underway.

Young 4-H exhibitors, their friends and family helping, hurried to ready themselves and their animals for the dairy cattle showmanship and show competition - making sure the cattle were clean, trim and calm while the human competitors were dressed in white with their black numbers, all ready to head out to the show ring when their division was called.

Nate Alt, 13, of Appleton was preparing to show Layla, a Jersey cow, in the junior showmanship division. He said he started when he was 5 years old.

"I like showing the animals, and watching over them, and walking them around the ring," he said.

Shelby Nerber of Newfane was ready for her first time in the show ring, presenting Hope, another Jersey, in the beginner showmanship category. She wore her cow earrings for luck.

"I like caring for her and making sure she's OK," Shelby said, "and petting her."

Every year, dozens of young exhibitors take part in the fair at the fairgrounds in Lockport, taking part in events that showcase the animals they've raised and their ability at showing them and the projects (gardening, crafts, baking) on which they've worked. 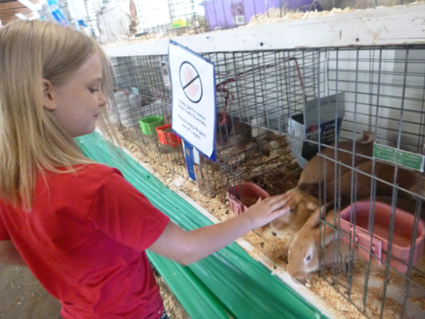 Sophia Radice cares for her rabbits Friday at the Niagara County Fair. The fair runs through Aug. 9.

In the dairy cattle showmanship competition Friday, the beginner exhibitors (those under 14 showing for the first time) watched and waited for more experienced divisions before taking their turn.

The eight young people slowly walked their sometimes recalcitrant cattle (which were, in some cases, nearly as tall as they were - or taller) around the ring under the watchful eye of judge Duncan Bailey, who eventually awarded first place to Sarah Martin, 13, of Middleport, who was showing Sweet Pea.

"Judging from this first beginner class, the future is in very good hands at the Niagara County Fair," Bailey said.

When not showing, the exhibitors are often on hand in the livestock barns to care for their animals and show them off to fair visitors.

In the rabbit barn, Elizabeth Wilcox, 11, of Ransomville, cleaned out her rabbit's cage and tended to his food and water while he explored nearby.

"I like that I can see all types of rabbits, and all types of guinea pigs," Elizabeth said of the fair. "I like seeing the people who are here.

"And I like Philip; he's my rabbit. He likes to see other rabbits, because he's usually home with our guinea pig."

Nearby, Sophia Radice, 8, had her hands full as she tended to her "little" rabbit family of Flemish giant Ginny (also known as Big Momma) and her four babies. Little more than 2 months old, the babies were bigger than many other full-grown rabbits at the fair.

Sophia also has a goat, Beatrice Buttons, on exhibit at the fair. She said she enjoys telling people about her animals.

"I like how I get to talk to people about my bunnies, and let them pet them," she said. "You've got to give them food, fresh water, make sure their cage is clean."

Not every exhibit is prone to escape. In the 4-H Training Center, crafts, baked goods and plants created or tended by participants are on display.

Mariana Martin, 5, of Sanborn showed off her many craft items, from a mosaic mirror to a pink hat festooned with green four-leaf clovers. It's her first year as a 4-H Cloverbud.

"I like making crafts," Mariana said, adding she is also exhibiting two guinea pigs, Checkers and Christine, at the fair. "That's my favorite."

Mariana's sister, Miracle Martin, 8, also has baked goods, gardening displays, crafts and a special project (her invention "Fisherman's Friend") on exhibit at the fair, as well as 13 guinea pigs in the rabbit barn.

"I think the guinea pigs are my favorite," she said, "because it's fun showing them."

The girls' mother, Marisa Martin of Sanborn, said she thinks every child should get a chance to take part in 4-H.

"It's the most amazing experience," she said. "My older daughter was so shy when she was younger, and now she'll sit and talk to people all day in the guinea pig barn. 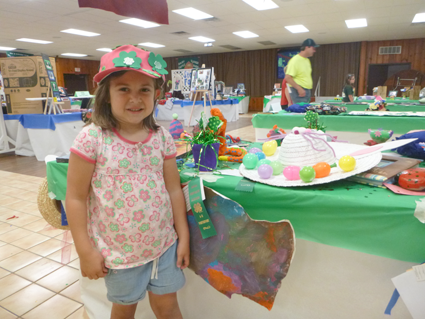 Mariana Martin, 5, of Sanborn shows off some of her craft items on display Friday at the Niagara County Fair. It's her first year as a 4-H Cloverbud.