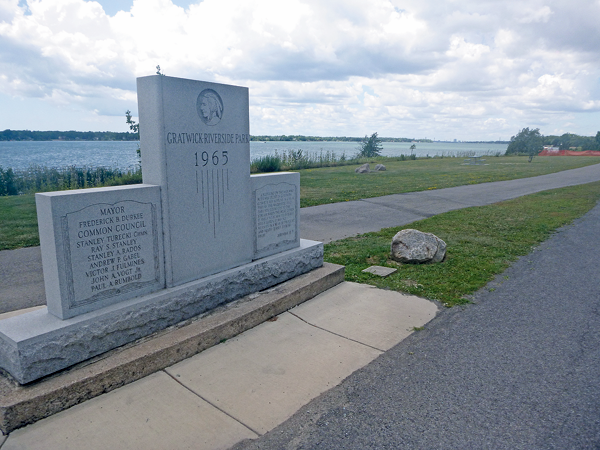 Officials in the Town of Wheatfield are proceeding with a project to link Gratwick Riverside Park in North Tonawanda with Niagara Falls' Griffon Park in a continuation of the Niagara Riverfront Multi-Use Trail.

Those who pick up a brochure for the Niagara River Greenway Trails will see a map from Buffalo all the way up to Lewiston and Porter, with multicolored lines marking pathways and bike routes that wind along the river shoreline.

But on a copy shown by Town of Wheatfield Supervisor Robert Cliffe, two purple ovals mark places where the shoreline trail has a gap — and one is right in the middle of Wheatfield.

Among the issues, however, in filling in that missing link are the closely packed homes and buildings on the actual rivershore along River Road, Cliffe said. "If you continued it along the water, you'd be in a whole lot of people's front yards."

Wheatfield's zoning protects those residential areas, so the challenge is to continue the 36-mile-long Niagara Riverfront Multi-Use Trail in a way that skips that zone.

The project is planned in two phases: Phase one from the city line with Niagara Falls, near Griffon Park, to Liberty Drive in Wheatfield; and phase two from Liberty Drive to NT's Gratwick Park.

Phase one is on its way, with the Wheatfield Town Board voting recently to borrow $350,000 (through a five-year bond) to pay for the design of the entire trail and the implementation of phase one. The board also voted to pay $346,635 to town engineering firm Wendel Duchscherer Architects and Engineers for that design. Bids could go out by early spring, Cliffe said.

The first phase is estimated to cost about $1.8 million, which will be funded by the aforementioned bond and $1,162,000 in money from the National Scenic Byways federal highway program.

Phase two, however, hangs on a few variables. To the east of Liberty Drive in Wheatfield, the planned trail site will meet an active railroad track, Cliffe said. Town officials will enter discussions with CSX Transportation to figure out the best way to continue the trail while ensuring safety and the proper right of way, he said.

The full project is expected to cost about $3 million, but it's impossible to have a full number until these discussions take place, Cliffe said. "Once we know where we're going, we'll know how expensive it's going to be."

Toward that end, the Greenway Commission recently approved a request for partial funding for the project, an amount of $600,000, or $150,000 per year over four years, from New York Power Authority relicensing funds. While the plan received "full and enthusiastic support" from the commission, Cliffe said, this still needs an OK from the Host Communities Standing Committee.

Other funds could come from the state Department of Transportation's Transportation Alternatives Program, to which the town has applied, Cliffe said.

"This would be a nice bike path for Wheatfield," he said. "But because the majority of the people who would use it wouldn't be from Wheatfield, we don't feel our taxpayers should have to pay for the whole thing."

Wheatfield Town Councilman Larry Helwig said many local residents along the River Road area have been involved in the project along the way.

"It's been a long ordeal," he said. "It started way back, probably almost 10 years ago. ... The Greenway Commission put a dotted line on a map showing potential greenway trails, to connect all the way from Youngstown to Buffalo. ... Residents along there really got up in arms that they were labeled with a walking trail in their front yards."

In response, the Wheatfield Waterfront Association formed, and is, in part, responsible for the plans in progress now, Helwig said.

"We had a really active group of waterfront residents down there. We met several times at Frontier Fire Hall," he said. "We wanted the support of all the neighbors in that area -- No. 1, to show them we were not infringing on their property, and No. 2, that we were designing a trail that was going to meet their needs."

In letters submitted in support of the project to the committee and the DOT, many local officials added words of praise for the undertaking.

Arthur Pappas, mayor of North Tonawanda, said the project would construct "a missing link" of the Niagara Greenway.

"I strongly support this project and the benefit it will have, not only for the residents in the Town of Wheatfield, but also for residents throughout the region," he wrote.

The path would be about 10 to 12 feet wide. The town would also be responsible for future maintenance.