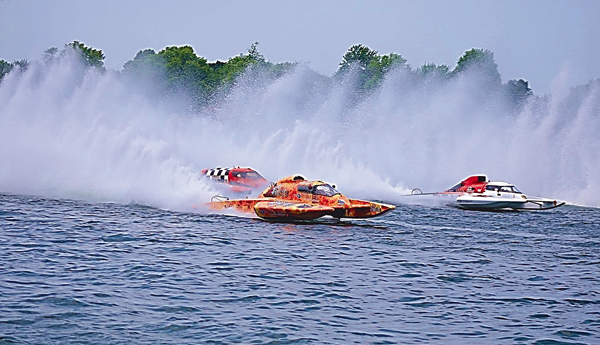 Grand-prix hydroplane boats take part in a recent race in Valleyfield, Canada. The boats will be in Western New York on Aug. 15 and 16 for the Thunder on the Niagara hydroplane races. (Contributed photo)

They're loud. They're fast. And they're returning to the Niagara River and North Tonawanda's Gratwick Riverside Park for the 10th year on Aug. 15 and 16.

The Thunder on the Niagara hydroplane boat races will take place starting at 9 a.m. each day at the park ... or, more appropriately, the Niagara River adjacent to the park. The land venue, however, will host related events for spectators, including food vendors, crafters, an expanded kids' zone and a concert by the Screaming Pineapples on Saturday evening.

During a press conference Tuesday at the park, NT Mayor Arthur Pappas announced the return of the event with Snyder Industries of the City of Tonawanda as key sponsor for the event for the third year in a row. The Niagara Frontier Boat Racing Association teams up with the American Canadian Hydroplane Association to present the races.

"The hydroplanes are automotive, high-performance boats that thunder and fly over the water," Pappas said. "That's the kind of thunder we like in North Tonawanda."

The event has drawn thousands of people to the area since it started, said Gary Roesch of Grand Island, director of the event. About 90 race teams are expected. Many racers hail from Ontario and Quebec in Canada, but also Ohio, New Jersey, Louisiana and other states, he said. "They look forward to coming here and racing." 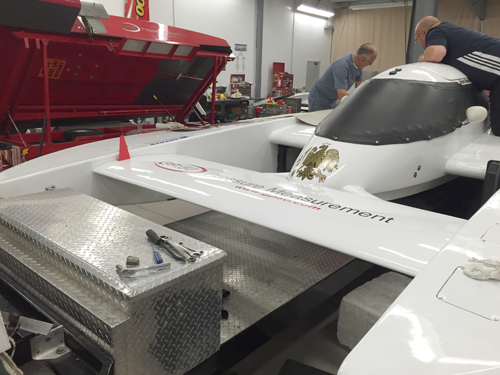 People work on a hydroplane at a workshop at GP:50/Blue Ribbon, owned by Don Less, on Grand Island. Less is a major sponsor of the boat. (Contributed photo)

Racer Ken Brodie of Grand Island, standing in front of his boat for the press conference, said he's taken part most of the event's 10 years.

"It's extremely exhilarating," he said. "I've often said it's a little like a magic carpet. You're flying on the top of the water."

Last year's event was particularly notable for Brodie, whose boat flipped during a race -- an event memorialized in a photo on the event's Facebook page. He was uninjured.

"Our safety equipment with all the boats is second to none," he said. "And I was able to put the boat back together and race two weeks later."

Most racers follow a circuit of about eight to 12 races that runs from May to September at venues throughout the country, he said.

The venue will open each day at 8 a.m.; races start about 9 a.m. Admission is free. Parking will be available on site for a $10 donation, which includes an event program. A portion of the proceeds will benefit North Tonawanda's Twin Cities Community Outreach. 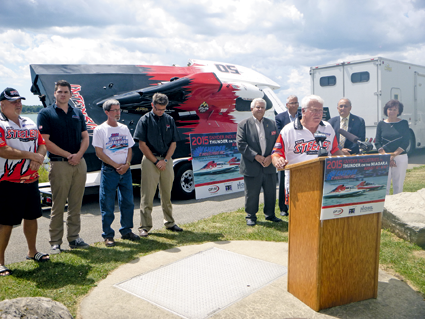 Gary Roesch of Grand Island, director of the Thunder on the Niagara hydroplane races, speaks at a press conference Tuesday at Gratwick Riverside Park in North Tonawanda. The races will take place Aug. 15 and 16. (Photo by Jill Keppeler) 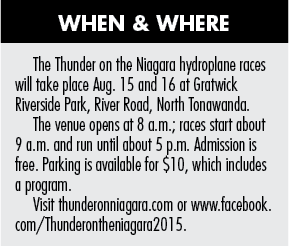