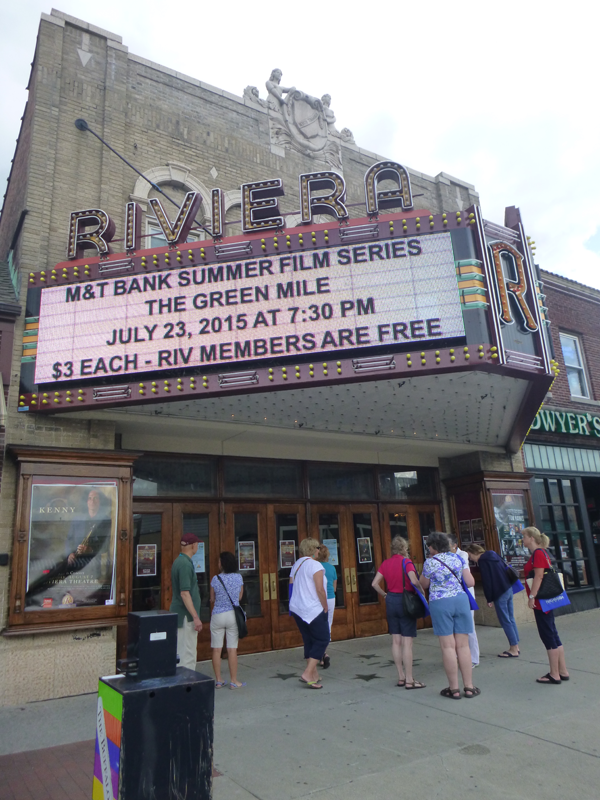 Participants in the Explore Buffalo tours held recently in North Tonawanda got a glimpse of six locations on the National Historic Register, including the Riviera Theatre, the Herschell Carrousel Factory Museum and the Carnegie Art Center. (Photos by Jill Keppeler)

Some of them had never set foot in the city before; some of them grew up there. But the participants in a recent tour all had one thing in common: They wanted to learn more about North Tonawanda.

Explore Buffalo, a nonprofit organization that offers various tours of the Buffalo area, recently offered a "North Tonawanda: Lumber City" tour during Canal Fest. The NT tours, the first outside the City of Buffalo, were started for last year's festival, Executive Director Brad Hahn said. After a "great response," they were expanded another year - and soon may be offered beyond the festival week.

The 10 participants in a recent tour gathered at the Carnegie Art Center, formerly the Carnegie Library, at 240 Goundry St. Tour guide Eleanor Ash promised the group a portrait of a city in "broad brush strokes" and information that could lead them to find out more and return for more.

North Tonawanda started as "a little frontier town" on Tonawanda Creek, she said, and its growth paralleled Buffalo in many ways. NT became a village in 1865 and a city in 1897.

"Basically, it was the trade," she said of the growth of the community. "It was because of the canal and because the lumber was able to come down it."

Ash told the tour participants that the city has six places on the National Historic Register - all of which they'd get at least a glimpse on the tour, starting with the Carnegie itself. The building, built in 1903, was one of thousands of libraries built around the world through the efforts of businessman Andrew Carnegie.

Tour participants were able to take a quick look at the building's interior, original woodwork, tile floor and stained-glass skylight. Barbara Hughes, vice chair of the Carnegie Art Center, described some of the renovations being done and the efforts to build the building as an art center once again.

"We're trying to look at arts in the Tonawandas, access to the community," she said. "It's an ongoing thing for us to try to maintain and preserve this building."

The tour proceeded down Goundry Street to Payne Avenue, then up to Thompson Street to the Herschell Carrousel Factory Museum. Ash paused along the way to point out North Tonawanda City Hall, built in 1939, and Sweeney Cemetery, established in 1857, at Payne Avenue and Thompson Street. Allan Herschell himself is buried there, along with veterans dating back to the American Revolution, she told the group before it continued on.

Many of the participants in the tour were from other portions of Western New York, but Laura Pascall was born and raised and lives in North Tonawanda.

"I figured there are a lot of things I don't know about," she said. "You know how it is when you live somewhere. You kind of take it all for granted."

At the Carrousel Museum, Director Rae Proefrock gave the group an overview of the museum (which is also on the National Historic Register), a peek at the 1916 No. 1 Special carrousel and a chance to listen to one of the newer acquisitions, a 1917 Artizan band organ.

From there, it was over to and down Oliver Street, with an overview on history of the railroad in NT and a stroll past the site of the Railroad Museum of the Niagara Frontier in its historic freight depot.

"At one time, North Tonawanda had 16 kinds of railroads coming through the city," Ash said, pointing out that it all comes back, again, to lumber. In three years, she said, the city was the lumber capital of the world, even over Chicago -- 1890, 1903 and 1906.

The group also paused at the post office at Oliver and Goundry streets (No. 3 on the NHR), then proceeded to Webster Street, where they learned about the "Dick Block" commercial building (No. 4), the Riviera Theatre (No. 5) and other sites.

Tour participant Phyllis Spears of Williamsville said she had been looking for a tour of North Tonawanda and since her sister was visiting, it seemed like a good time.

"We knew it was Canal Fest, which we've also never done," she said. "It just seemed like the thing to do."

Spears said she moved to Buffalo for a promotion years ago, but now she stays for a different reason.

"This is home," she said. "I fell in love with Western New York."

Tour-goers next got an inside peek at the former Herschell-Spillman Motor Co. Complex (No. 6 on the NHR) at 184 Sweeney St. - later known at the Remington Rand Building and now the Remington Lofts and the Remington Tavern. The visitors were able to peek at an apartment and the view from the rooftop before swinging back to the Carnegie for the end of the tour.

Ash is not a North Tonawanda native, but has lived in the city for years and calls it home. A docent at Albright-Knox and other places, she also volunteers with Explore Buffalo by giving the Frank Lloyd Wright's Fontana Boathouse tours.

"I like to learn about things. I learn better when I need to teach other people about it," she said. "It's an inspiration to me, when you hear someone say, 'Gee, I didn't know that.' "

For more information on Explore Buffalo, visit www.explorebuffalo.org or call 716-245-3032. 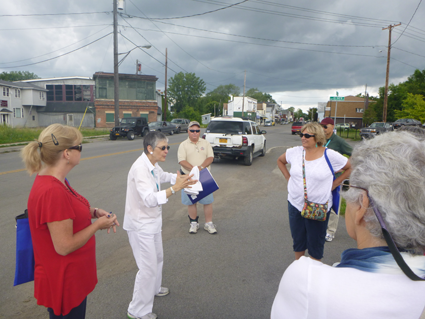 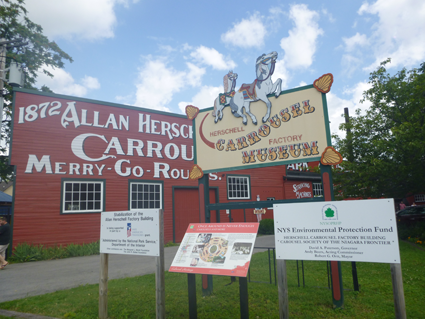