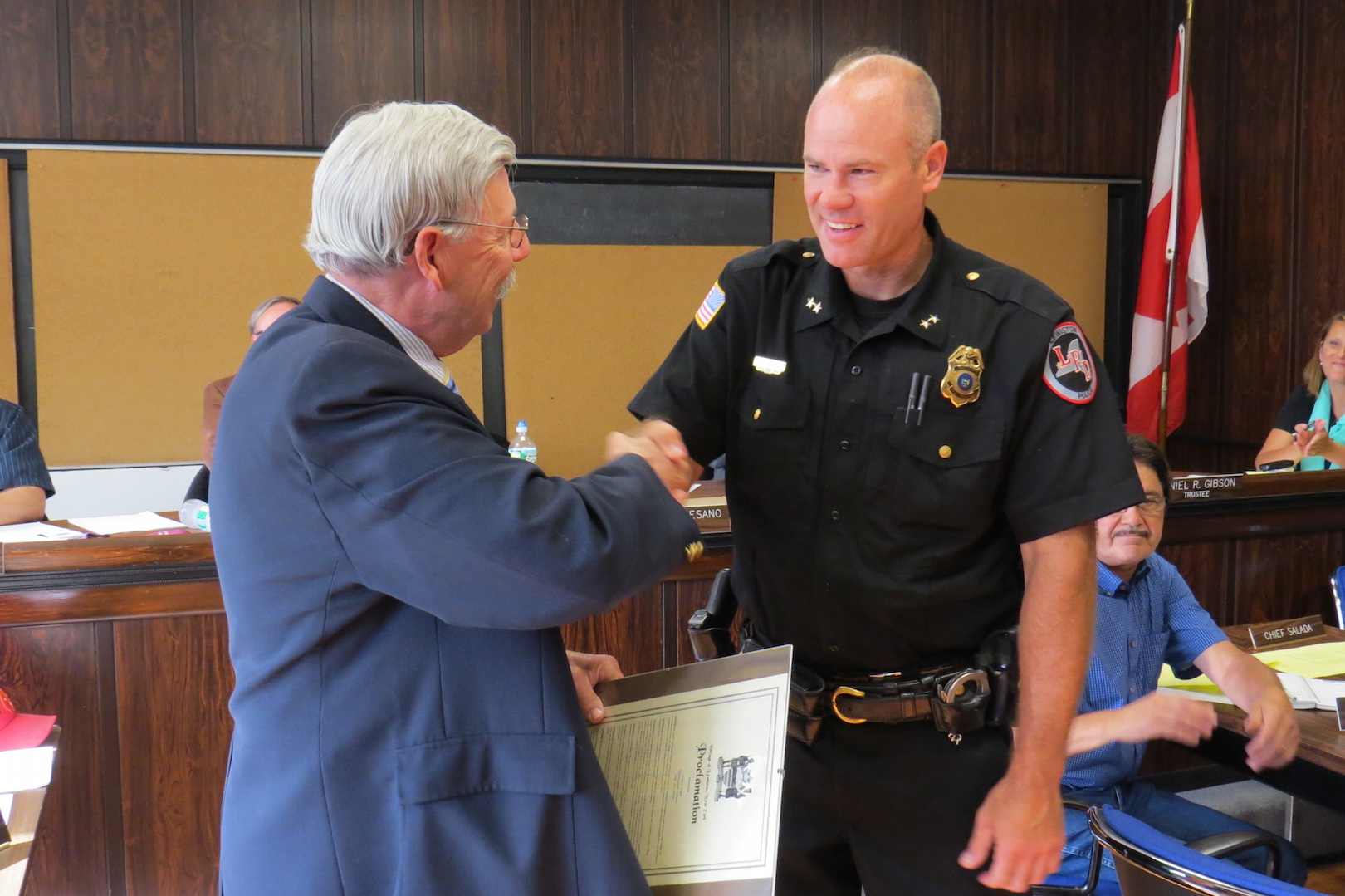 Friday marked a relatively quiet change at the top for the Lewiston Police Department.

Chief Chris Salada finished his last day on the job and, at least for the time being, department operations will be maintained via seniority with LPD Sgt. Frank Previte expected to oversee day-to-day affairs until a replacement is officially named.

For Salada, 46, Friday, while low-key, was also a day of significance: The closing of a 25-year career in law enforcement and a new chapter ahead. And while he does, indeed, welcome the change, one can also tell he's leaving law enforcement with somewhat mixed feelings.

"I owe a lot of this to my brother, John," said Salada, who noted he actually went to school to be a diesel mechanic. "I was actually working for a trucking company and a school bus line before that."

But once Salada got the taste for police work, he was hooked.

"He was a Lewiston policeman at the time; I used to drive around with him," said Salada of his brother. "I got to the point (where) I really liked it. My brother, he went from the town to the sheriff's department, he ended up retiring from there ... he got me hooked."

Salada began his career part time with the Town of Lewiston Police in 1990 and soon after took on another part-time stint with the Village of Lewiston, which back then had its own police force.

"I worked the two departments five years, part time," he said. "I went full time with the village in 1995. The village and town consolidated in 1996 and I've been full time since then."

Salada spent the bulk of his time with LPD - 17 years - doing road patrols. He went on to assume the role of chief in Lewiston in July 2007 following the retirement of Ron Winkley. Salada took on a similar title with Youngstown Police Department following earlier patrol work.

"I loved doing road patrol, responding to all the calls," Salada said. "I liked doing afternoons the best, because it was the busiest shift. You get to interact with all your brother policemen; you become very close. I liked being busy."

Salada welcomed the move up to chief, but also admitted to second thoughts of actually becoming the department administrator.

"It was a huge change going from (being) a patrolman for 17 years and jumping into the highest position possible and being in charge of the whole department," he said. "I think I was accepted very well by the guys."

It was also a challenge at times.

Salada said one his biggest challenges right off was Artpark. The entertainment venue was growing in popularity in the early 2000s and, by 2007, the LPD found itself busier than ever with traffic control, crowd behavior issues and, at times, frustrated, unhappy village residents. Salada was changed with the task of managing village streets for Artpark concerts. He developed working relationships with area law enforcement to better handle crowds, imposed parking regulations, created new traffic patterns and managed crowd behavior.

Today, the issue of drinking alcohol on village streets has all but vanished thanks to diligent LPD enforcement of a village open container law. And, together with a restructuring in recent years by Artpark & Company - including a smaller amphitheater, crowd limits, ticket prices and other moves to curb bad behavior - many of the earlier overcrowding problems have been alleviated.

"Planning for Artpark was one of the more difficult things," Salada said.

"(A) significant (challenge) that came to be and persists is community relations," Salada said. "I think the biggest difficulty for me was hearing complaints about the cops - taking complaints from the public about the officers. We're a family here; to hear some of the criticism, it's hard to accept."

"One of the more difficult things was listening to the people, getting their side of it ... going in trying to be as fair as you can to both sides, and taking care of our own," he added.

In talking with Salada, one can feel his passion for the department. It particularly showed when some residents, including former Trustee Ronald Craft, sought to eliminate the LPD.

"Mr. Craft, obviously, was trying to get rid of us, and the Village Board was looking at some options the year before that, so we really had to step up and show that we're needed - a necessity, not a luxury," Salada said. "I had the opportunity during last year's Peach Festival to talk with him. I tried to explain my end.

"I just try to think that Mr. Craft has good intentions, for himself, for the community. But for my end of it, this department, it is not a luxury, it's a necessity. You would have to hire a lot of policemen to cover, if this department was not here."

Mayor Terry Collesano and the Village of Lewiston Board of Trustees presented Salada with a framed proclamation of appreciation during Monday's monthly board meeting.

Following Salada's final department report, Collesano said, "Chief, it has been a pleasure working with you. But you're not going to get off that easy, my friend. Step forward, please."

With that, Collesano walked around the dais to present Salada with a declaration that reads, in part, "Whereas Chief Christopher Salada's 25 years of dedicated law enforcement service to the Village of Lewiston has made the village a better place to live. ... Chris has ensured the safety of this community through his tireless commitment to enforcing the village laws since August of 1990. Whereas, in his law enforcement position, Chief Salada has earned the respect and confidence of the village trustees, local law enforcement agencies and the citizens of Lewiston. ... Whereas Chief Salada will be best known and remembered for his gentlemanly demeanor while working with ... many groups and individuals. ... Now, therefore, be it proclaimed that the Village of Lewiston Board of Trustees acknowledge the contribution that Christopher Salada has made to the citizens of the Village of Lewiston during his successful career in law enforcement, and wish him a well-deserved retirement."

Collesano and Deputy Mayor Bruce Sutherland thanked Salada for being available and quick to respond.

"It's been a pleasure working with this board, and everybody else here in the community," Salada said. "That part of it will be missed very much."

With that, he received a round of applause from those in attendance.

Salada said the Lewiston Police Department, which numbers 10 full-time and nine part-time officers, has and continues to keep abreast of the issues the community faces. And he said he hopes the LPD can continue to provide the same level of service village and town residents have come to appreciate.

"I would like to see this department at least maintain what it has. Two cars on, all the time. That's at least what we need here," Salada said. "We're so busy. I don't expect to see additional full-time men though. ... As much as it's needed, budgets don't allow that, it's cost-prohibitive. But I hope that the powers that be would continue to maintain what we have: the numbers of guys that we have, the numbers of guys on the road that we have. It's working very nicely right now."

So, come next month, Salada heads into the private sector, a career move he and his family welcome. But, again, it comes with mixed feelings.

Salada also left the door open for a potential return to law enforcement down the road.

"I'm open to pretty much whatever the future brings. I want to keep my options open," he said. "My certification is good for five years ... if there's an opportunity for me that would open up in law enforcement, I would jump at it."

He closed by urging the community to continue its support for the Lewiston Police Department.

"Have faith and confidence that the Lewiston Police Department will continue on, and watch over this community," Salada said. "We got a lot of great guys, who are staying, that are devoted to this community.

"I will be included in one of those that they're protecting, because I'm planning on living here for the rest of my life."