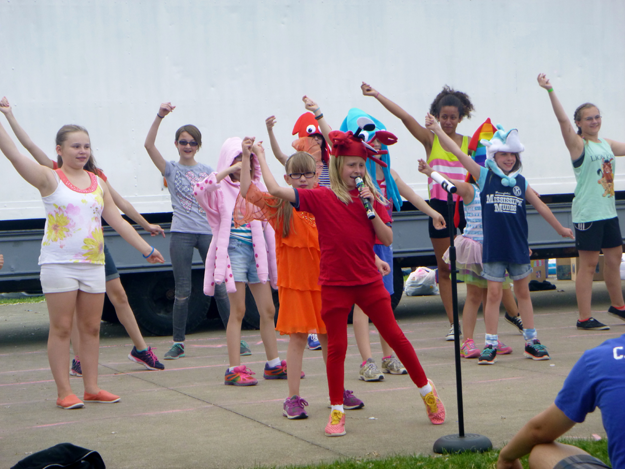 Alanna Banas, 9, of North Tonawanda, who plays Sebastian, leads a dance at a recent rehearsal of In Good Company Production's "Disney's The Little Mermaid Jr." The show will open July 27.

Part of their world: In Good Company brings theater experience to WNY kids

On a recent summer evening at North Tonawanda's Fishermen's Park, there were no fishermen in sight - but there were many "fish."

From minnows to mermaids, a group of children and teens from throughout the Niagara region gathered to dance, sing and rehearse their lines for "Disney's The Little Mermaid Jr." for In Good Company Productions, which will mark its 11th season this summer.

"They're really good kids. It's really coming along," said Director Melissa Durfey as she watched the young actors spin through a choreographed number. "We're starting to put everything together." 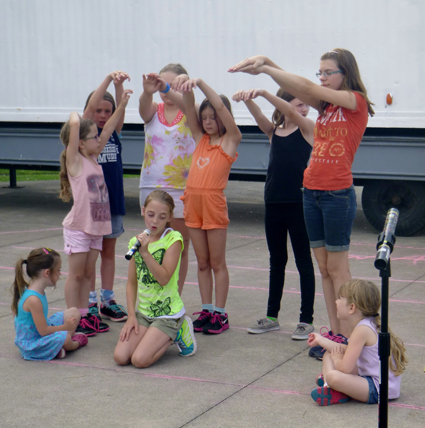 Alyssa Marella, 10, one of In Good Company's Ariels for "Disney's The Little Mermaid Jr.," sings during a recent rehearsal.

Durfey, of Sanborn, serves as IGC president and director - and is also a founder of the group. She spent part of her childhood taking part in shows with local theater groups and, years later, started IGC with her siblings to provide a similar experience to their children and others.

That first show, "Godspell," started with about 30 people. This year, about 85 people, from age 2 to adult, are taking part. Some have roles in both shows, most in one or the other. Many have been involved for years.

"It becomes a family. You make these friends, establish relationships with these kids and their parents and it is a really unique, wonderful experience. You look forward to it all winter long," Durfey said. "We laugh and we work really hard and sometimes it gets frustrating ... but I can't imagine not doing it. It's not even a question."

It's particularly rewarding to see the young actors grow, she said, and to see children who used to cry from nervousness at rehearsals now taking on the challenge of lead roles.

"You see the kids grow and grow and when they're ready, it's just such a joy to give them the part. And it is just as important to be in the chorus as be the lead," she added. "They're looking forward to that part the whole summer. We really try to make them all feel loved and included."

For the second year, a number of experienced older IGC participants serve in a mentor program to help with the younger children. Durfey called the program "a huge success."

"That's how we can do two shows this year, because we have them here to help direct 'traffic,' " she said. "It's so good for them, and it's good for the little kids, too."

One of those mentors is Durfey's oldest daughter, Olivia Tober, 16. (Her other children, John and Allison Tober, are also very involved.) For the first time, Tober is taking on a new role, that of assistant director.

Tober said she's been in IGC shows every year since she was 6, and it was a tough decision to move away from acting.

"I'm definitely going to cry on opening night when these kids go into the real world, but I'm so excited to see what they can do."

Tober said her time with IGC has helped her become less shy and more confident.

"I've met all my best friends there ... and we've stuck together all these years," she said. "I really just love going there every single night, because it's a family and it's amazing."

Durfey also credited an "amazing" group of parents for the program's growth and success.

Michelle Marella of North Tonawanda has three daughters taking part this year: Alyssa, 10, one of the show's Ariels; Abigail, 8, who plays Flounder; and Anna, 4, a seahorse.

This is their second year in IGC, Marella said. "I'm here every single night and I love it."

"I think it's excellent for their self-esteem," she said. "My middle one is really shy and I feel this helped her come out of her shell a little bit.

"It's good they have the opportunity to do musical things, because a lot of the schools, they don't have those opportunities."

Abigail Marella paused to show off her yellow-and-blue Flounder dress.

Nick Price of North Tonawanda also has three daughters taking part in the show: Brooke, 7; Lauren, 10; and Megan, 10. The older two are also in "Aladdin." The family has been involved in IGC for about seven years.

"The kids have a great time. It teaches them to work with other people, it boosts their confidence," he said. "They love it. They have such a good time over the summer."

Alanna Banas, 9, of North Tonawanda, serves as a ringleader for much of the show's action in her role as undersea crustacean-conductor Sebastian.

"I like how I really get to act like a whole different person," she said during a moment between numbers. "It's a challenge. It's exciting and fun, and the mentors are really nice."

For more information on In Good Company, visit www.ingoodcompanyproductions.org. 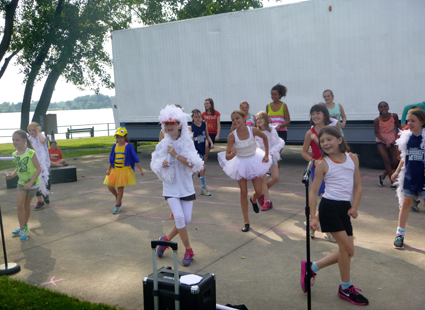 Young actors and actresses dance during a rehearsal for "Disney's The Little Mermaid Jr." at North Tonawanda's Fishermen's Park. 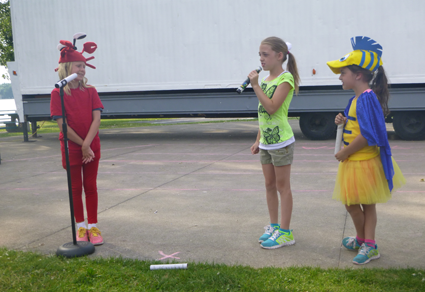