Memorabilia from North Tonawanda sports programs, a room devoted to Jim Hurtubise, a Wurlitzer jukebox, programs from Melody Fair and generations worth of wedding dresses are on display at the North Tonawanda History Museum. (Photos by Jill Keppeler)

Pieces of the Past: North Tonawanda History Museum

"People come in and I tell them they need a minimum of two hours," Neal said. "They spend two hours and come back and say, 'We need a couple days.'"

The museum on North Tonawanda's Webster Street boasts 10,800 feet of exhibits, with new artifacts added almost daily and thousands of visitors each year - particularly during Canal Fest week, Neal said. Whether they're new to the area or native Tonawandans returning for the festival or a visit, 60 percent of the museum's visitors are from outside the Tonawandas, and 40 percent of these are from outside the state -- sometimes the country. (Visitors have hailed from as far away as Australia and New Zealand.)

The museum, which was started in 2003 and moved to its current location (the former G.C. Murphy five-and-dime store) in 2009, is dense with information -- not just artifacts, but photos, articles and other documents.

They range from the tiniest Buffalo Bolt employee service pin to the 25-foot-long Little Giant cabin cruiser from the Richardson Boat Co. (A prize so big that museum personnel had to remove the doors to the site to get it inside.) But they all lend their own element of history.

"Anything we get was from someone who loved it," Neal said. 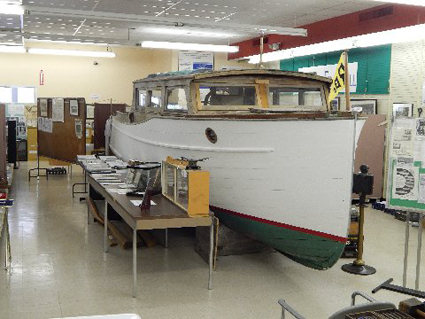 One nook dedicated to North Tonawanda High School sports shelters letter jackets, cheerleader megaphones and more, while another is devoted to bowling. ("We don't have any more bowling alleys in North Tonawanda, but at one time, we had five," Neal noted.)

Generations of bridal gowns and accoutrements grace another area, while pieces of a car once driven by Jim "Herk" Hurtubise of North Tonawanda - Rookie of the Year at the Indy 500 in 1960 -- are on display in yet another, along with many other pieces of history related to Hurtubise.

One sizable area is devoted to an enormous diorama of the 1901 Pan American Exposition - linked in history to North Tonawanda, as a number of local companies were involved in the exposition's buildings and construction. Most of the exhibit was created in 2001 for the 100th anniversary of the exposition as a City of Tonawanda School District project by students of now-retired teachers Demelt Shaw and James Steele. It was donated to the museum in 2011, and Shaw and Steele are still involved in rebuilding and restoring it.

One entire hall is devoted to the history of North Tonawanda's schools, including those now closed but never forgotten. Wooden desks line the wall and the faces of students long since grown and graduated look out from class photos.

"A nun came in and said, 'If we give you stuff from North Tonawanda Catholic School, can you make sure no one ever forgets?' " Neal recalled.

Much is dedicated to the city's businesses of the past, from the small (the fondly remembered Sugar Bowl on Webster Street) to the large. The museum has an extensive collection of Wurlitzer organs and jukeboxes (and a baby grand piano), as well as many wagons produced at the local Auto Wheel Coaster Co.

Other exhibits focus on military history, with many uniforms from varying eras, churches (including a full altar from St. Paul's Evangelical Lutheran Church) and countless other topics.

The collection is always growing, and so are plans for the museum. Money is being raised for an exterior renovation project, and interior renovations and expanded exhibits are planned for the future.

"When we wrote our first book, I called it a love story finally told," Neal said, recalling the early years of museum dreams and plans. "This history museum is to give North Tonawanda back its historical identity, and we've accomplished that."

For all of these people who visit the museum (for two hours or several days), some of them never really leave.

She found it. Then she started to volunteer. Today, she's the president of the museum's board of directors.

"It's just a little spot on the way between Niagara Falls and Buffalo," she said of North Tonawanda. "But it's a good spot, and I'm happy to be here." 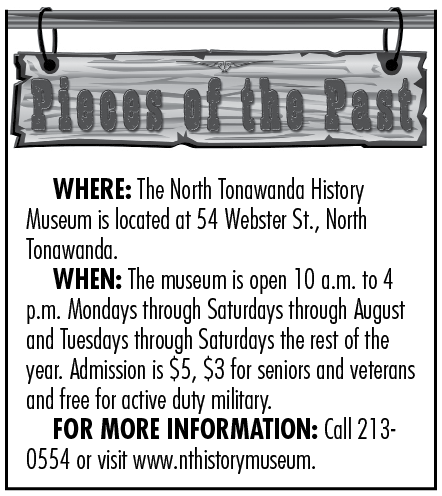