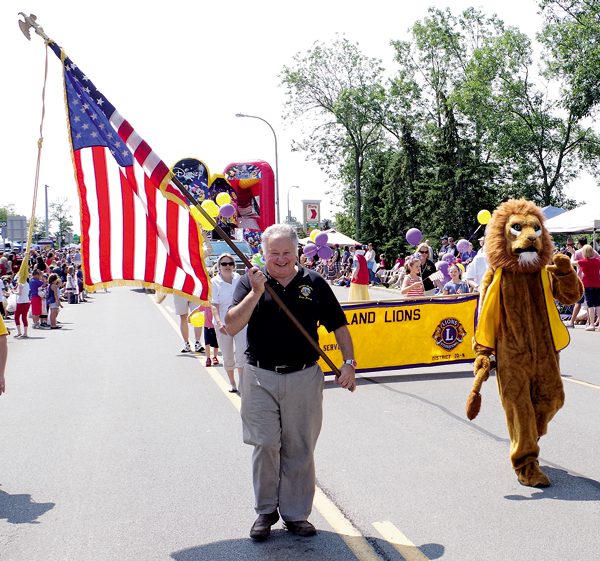 Henry Lobl carries Old Glory alongside Leo the Lion, mascot of the Grand Island Lions Club, during the Independence Day Parade Saturday. The Lions will hold their Special Kids Picnic Wednesday at the Buffalo Launch Club. (Photo by Larry Austin)

•Taken from the July 10 Island Dispatch

It's all about the smiles.

Just ask members of the Grand Island Lions Club. Each year, the club sponsors the Special Kids Picnic. The 57th annual event will be Wednesday, July 15, at the Island's Buffalo Launch Club.

Something has kept Lions President Tom Rusert, past presidents Shelia Ferrentino and Anne Fahning, and Picnic Chairman Annette Boies-Lobl coming back year after year, for the past 10 to 15 years, on picnic day. They say they do it because it's the Lions Club mission to serve the community. Probe a little more and they confess it's the look of bliss on the faces of the youngsters with special needs who attend.

"Are you kidding?" Ferrentino said. "Just watching one kid smile and laugh is definitely the gift that keeps on giving; now multiply that by 700 ... there's really no words to describe it."

Ferrentino remembers a teacher telling her how much students brightened with anticipation weeks in advance when told picnic day was coming.

Some who attend have never had a chance to go on a boat ride or even a pony ride, Fahning said. "These kids don't have a lot of opportunity to do things like this. To watch them smile and be happy is worth it."

Fahning takes care of the boats and the dock for the picnic and her husband Bob brings his boat and his business partner to help out.

Boies-Lobl said more than 700 youngsters (up to age
19) and their teachers or caregivers are expected to attend next week's picnic. They will be coming from places like Autism Services in Erie County, Baker Victory Services, Erie County BOCES, the Sweet Home School District and People Inc. The big picnic provides pony rides, face-painting, lunch of hot dogs, hamburgers, popcorn and pop, a chance to inspect a Grand Island Fire Co. fire truck, Shriners car rides, lots of entertainment with music, magic, clowns and baton twirlers, and, of course, boat rides.

In addition to the Excalibur Leisure Skills wheelchair accessible boat the Richard A. Smith, a number of local boat captains volunteer their services. "Some have done it as much as 30 years," Boies-Lobl said.

Rusert brings his own 27-foot cabin cruiser and donates his time to take the children for rides on the river. The excited children say "Thank you" afterward, but "the smile is reward enough on their faces," he said.

Sharing in the smiles this year will be other local Lions Clubs, including Newfane and Ransomville and Grand Island's sister club from Merritton, Ontario. Others among the approximately 100 volunteers expected include the Rotary Club, the Knights of Columbus, the Grand Island High School football team, and Kenmore Boy Scout Troop 104.

"Special thanks goes to the Buffalo Launch Club for donating their facilities, to Island Prescription Center as the lead sponsor, to the boat captains who donated their boats and time including the Excalibur Boat, and to Tops Markets, Tim Hortons and Dunkin' Donuts for their donations," said Boies-Lobl.