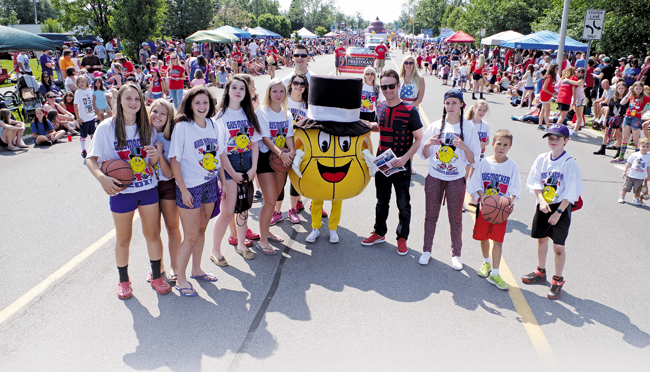 Corey McGowan promoted the Gus Macker 3-on-3 basketball tournament during the Independence Day Parade Saturday, though he still needed final OK from the Grand Island Town Board. (Photo by Larry Austin)

•Taken from the July 10 Island Dispatch

The first Grand Island Gus Macker 3-on-3 basketball tournament will tip off Aug. 29 and 30 after the Grand Island Town Board gave its OK Wednesday.

Following a meeting at 8 a.m. Wednesday with Gus Macker tournament organizer Corey McGowan, the board voted to support the event. McGowan had promoted the tournament back in May when he announced at a press conference with Macker founder Scott McNeal the agreement to hold the tourney on Grand Island Boulevard. The Town Board held off on giving final approval, however, while it investigated safety aspects of holding the event.

The vote to support the tournament, which was held for many years in the City of Buffalo, is pending completion of some contractual matters. The vote was not unanimous, with Town Supervisor Mary Cooke and councilmen Chris Aronica and Ray Billica voting yes to support McGowan's application to hold the event, and Councilman Gary Roesch voting no.

McGowan was happy following the meeting Wednesday in Town Hall, saying organizers can now promote the event without restraint and can move ahead to sign up 3-on-3 teams on the Gus Macker website. McGowan had postponed online signups for teams while the board talked the issue over. Roesch opposed holding the tourney, citing security concerns, saying he had "a lot of conversations with not only residents but also with businesses within the area that are looking at additional insurance policies for their facilities, and looking at additional security personnel for their facilities. The majority of the people that I have talked to are not in favor of it."

The meeting was at times confrontational, with McGowan and Roesch arguing about particulars of the contract to hold the event.

Roesch said his "biggest concern is the safety of the residents of Grand Island."

"What are you concerned about?" McGowan responded. "Because we're bringing in 20 law enforcement officers for a 500-team tournament. So what are you scared of?" Roesch voiced concern with security plans that did not initially provide coverage of the perimeter of the venue. He also raised worries about problems with tailgating.

"You're the only one pushing for this not to happen when all your requests have been satisfied, including the most recent one that (security personnel) need to watch the parking lots outside," McGowan charged.

Roesch added his concern about a remark by John Anthony of the Erie County Sheriff's Office during a Macker security meeting last Thursday. Anthony mentioned that the Macker could not happen on a worse weekend because of security coverage needs for a Buffalo Bills game and the State Fair, which are scheduled for the same weekend. Law enforcement representatives at the security meeting from the Grand Island Police, ECSO and State Police could not promise additional manpower for the Macker, Roesch pointed out.

McGowan told Roesch that with security staffing provided by Executive Investigation and Security, "Everybody is trained to handle this event. We've got 20 extra guys.

I mean, nobody is concerned but you at this point."

Councilman Ray Billica concurred with Roesch and said perimeter parking lots need to be patrolled. Some competition courts, for 8-year-old players, Billica noted, don't need security. Billica said the board would like to see a revised contract stating the security company would include perimeter coverage. He added that 16 officers "inside a basketball venue is mind-boggling."

Billica addressed arrest powers of the security staff. If an arrest is required, Levino Johnson of Executive Investigation and Security told the board the subject would be detained at a command center until an on-duty officer could come to take custody.

Cooke clarified a description of the potential crowd at the Macker that had been posted on the Internet. Someone cited a 30,000-40,000 estimate, or a crowd 1.5 to 2 times the population of Grand Island, on a participant application, but McGowan explained that number is "exposure visibility" for vendors who sponsor the Macker, and not a crowd estimate.

"People look at that and totally panic," Cooke said of the number.

Aronica asked about alcohol at the event, and McGowan said that though some Mackers in other parts of the country have alcohol, the Island version is going to be an alcohol-free event.

McGowan asked for a signal from the board that it supports the event to "eliminate this cloud over us that this thing might not happen."

In moving to vote to approve the event, Billica said he is "more than comfortable" supporting the tourney.

"I am more than happy with the fact that there's going to be 20 additional police officers here on Grand Island protecting our public," Billica said.

Billica moved to give McGowan the go-ahead with completion on security and EMS details, an updated operation plan, and, at the request of Aronica, proof of insurance and bonding.

In explaining his support for the event, Billica said of resident feedback, "some of the time, it's been downright disrespectful and I've told a couple people, you know what, stop it." Others have voiced their support for the Macker, he said, "and I think it's something that is going to be interesting and I fully expect that it'll be fine."

After the meeting, when asked to elaborate on what he meant by "downright disrespectful," Billica talked about the elephant in the room, that some who oppose holding the Gus Macker on the Island do so because of the perceived race of participants and spectators.

Billica said he meant people "using language that would be inappropriate to describe individuals that might be coming to play basketball" from the African-American community.

Cooke said she didn't believe the racial comments she has seen reflect the views of the majority of Grand Islanders.

"All the events we do here are very well received, very successful," McGowan said adding the high-profile nature of the event may have "scared a few people."

McGowan said the vast majority of people will welcome the tournament, and he echoed Billica in describing some of the negative comments.

"I'll use the same word he used. I think some people have been disrespectful in terms of what this event is, and it's a shame," McGowan said. "It's going to do great things for Grand Island, so once the event happens people will really see that."

McGowan has promoted several Island events, including entertainment in the Town Commons and the popular Taste of Grand Island Fall Festivals.

"Whatever kind of reasons you want to come up with, you can come up with for not having this event," Billica said. "You can come up with the same kind of the reasons if you didn't want the Taste of Grand Island to happen because you close down a road, and all these people, and garbage and traffic and parking."