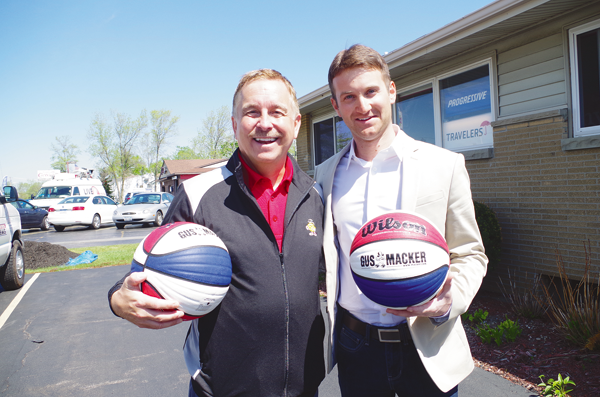 Scott McNeal, left, and Corey McGowan, hope to bring the Gus Macker 3-on-3 basketball tournament to Grand Island in August. McGowan, an Island native, introduced McNeal, event founder (and Gus Macker himself) at a news conference on the Island May 14. (Photo by Larry Austin)

•Taken from the July 3 Island Dispatch

Local event promoter Corey McGowan met with the Grand Island Town Board and law enforcement representatives Thursday to go over security plans for the Gus Macker 3-on-3 basketball tournament, but he left awaiting final approval to hold the hoops festival he plans for August.

McGowan introduced the council members and local police to Levino L. Johnson Sr., president and CEO of Executive Investigation Security, the organization he's picked to handle security at the two-day street basketball tourney. Town Supervisor Mary Cooke led off by saying the meeting's focus was to meet Johnson to "see the proposal that he has made ... to determine if it's going to meet people's expectations."

The board has gone into a four-corner stall on giving approval for McGowan's event. McGowan held a news conference May 14 to unveil plans for the event, but has waited more than a month for final town approval.

The town government is still weighing approval of the Gus Macker tournament, which is scheduled for the last weekend in August. Cooke said the meeting Thursday morning would allow the security agencies to consider plans "and to have questions answered and determine if this should move forward in terms of a safe event."

"I like Levino's company the best just because of his experience as a City of Buffalo Police officer, experience with the Macker, and his ability to pull all trained armed officers," McGowan said. He said the tourney would take place on a 900-foot stretch of Grand Island Boulevard, with additional hoops and courts in the Town Hall parking lot. The security would include 20 armed officers for a 500-team tournament.

Levino said he looked at what he called the "backyard," or footprint, of the tournament site, and made an initial assessment. He said the area is easily controlled by 20 people, but his main concern was ensuring local communication to handle what he called the unlikely event of arrests.

"We're going to try to put an extra car on," Franz said, but he noted there is a Bills game that day and many of the part-time officers in the town's employee pool will be pulled away to cover Orchard Park. Likewise, Lt. Kevin Barnas of the New York State Police said some state troopers would be out of town to cover the State Fair, limiting State Police availability for the Gus Macker. 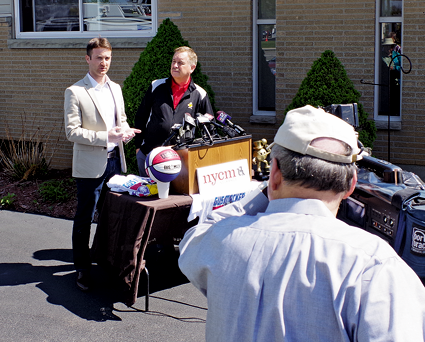 Scott McNeal holds court during a news conference to describe the Gus Macker 3-on-3 basketball tournament, an event he and promoter Corey McGowan hope takes place on Grand Island Boulevard in August. (Photo by Larry Austin)

Johnson said he was familiar with security at past Gus Macker tourneys in the City of Buffalo and said the backyard of that event was dissimilar to the proposed GI offering. In Buffalo, the backyard of the Macker was residential, which allowed subjects involved in incidents to jump a fence into private property, and return to the event unnoticed, while the Island tourney backyard is businesses. Also, the Buffalo edition of the Macker was frequented by unsupervised 11-18-year-old people who wandered into the event and "got into little skirmishes from high school or grammar school. This isn't going to be the situation," Johnson said of the GI version in comparing the two Mackers.

Johnson said, gang members don't have cars and wouldn't be coming to the Island. "These are kids," Johnson said of potential Island visitors, where the oldest troublemakers might by 17 "fighting over girls, basically."

"And you're not going to have that dynamic here," Johnson said. "I believe that most of the contestants here are going to come here and they're going to be looking to play basketball."

Mike Garrity of the NFTA said most of the problems presented by players are controlled, but non-participants cause greater problems on the periphery of the event, as he said is the case outside of Canalside, with such problems as tailgating.

"It's always the outer ring that's the problem," he said.

McGowan said there is a strict no-alcohol policy for players in the Gus Macker tournament and said problems for officers would conclude in issuance of appearance tickets. Small incidents, however, can lead to big problems, as Franz alluded to when he mentioned an earlier Tuesday night at Artpark, where 10,000 people attended a free concert by the Steve Miller Band. Franz said at end of the night, when all was seemingly going well, one highly intoxicated person walking in the roadway refused requests to walk in a safer route. The issue escalated into a fight and the subject fell on a police officer, injuring herself and breaking the officer's hand. That necessitated redeployment of duties at the height of traffic to take the officer and subject for medical attention.

"Something small can turn into something big and just deplete your manpower," Franz said. "That's what we want to mitigate here or at least have a plan for."

"We've got a lot of extra force for this event, above and beyond," McGowan said, adding that they are prepared for the extreme occurrence.

The town's inaction on approval of the tourney has put it in limbo. McGowan said there are plans to hold games on 26 courts, with up to 500 teams on the boulevard, but he had to put a freeze to publicity and signups for the tournament "until we know what's going on."

He held a press conference May 14 with Gus Macker founder Scott McNeal to introduce the event for Aug. 29 and 30. McNeal said the Gus Macker was approached by McGowan when plans for another local version of the event appeared to fall through.

"He was so enthusiastic, he kind of full-court pressed me," McNeal said of McGowan.

McNeal said he thought McGowan and Grand Island were the answer to the problem of where to hold the local tourney, and he called GI a good fit for the type of tourney Gus Macker provides.

"This community of Grand Island really kind of fits what Gus Macker is about," McNeal said. "We really talk about family, community and charity when we're thinking about Gus Macker."

"We love the Buffalo area, appreciate all the people that put the event on in downtown Buffalo over the years," McNeal said.